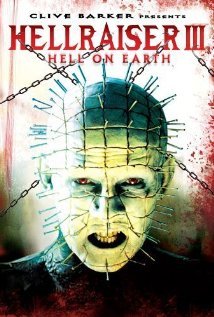 In HELLRAISER III--HELL ON EARTH, the devil in the form of Pinhead is conjured up and wreaks havoc and destruction on all who encounter him. A female T.V. reporter investigates Pinhead and nearly goes down to destruction herself. The film is darkly disturbing in its blatant mocking and blasphemy of Jesus Christ and Christianity. However, the special effects are outstanding and tend to reinforce the evil contained in the film as they indelibly etch the gruesome images on the viewer's mind.

HELLRAISER III–HELL ON EARTH conjures up the devil in the form of Pinhead, a hellish ghoul who is brought to life by eating the flesh and blood of his victims. At first, Pinhead is safely encased in a large, metallic sculpture (which appears to portray sinners burning in Hellfire). A young man breaks off a golden cube from the sculpture and supernatural chains from inside the cube attach themselves to the man causing him to scream in agony. A female TV reporter observes the man at the hospital and sees him being electrocuted by the chains until his head explodes in a gush of blood. The reporter tries to solve the mystery of what happened to the young man and is nearly destroyed herself.

The movie mocks Christianity and blasphemes Jesus Christ. In one scene, for example, a priest wields a crucifix and attempts to come to the reporter’s aid, but Pinhead melts the crucifix while reciting the second commandment: “Thou shalt not bow down before any graven image.” Also, Pinhead mimics Christ’s crucifixion and forces the priest to eat grotesque worms in a vile parody of Holy Communion. The filmmakers repeatedly mock both the Bible and Christ with their twisted sense of humor and portray God as nonexistent. However, the special effects are outstanding and tend to reinforce the overall evil as they indelibly etch the gruesome images on the viewer’s mind.