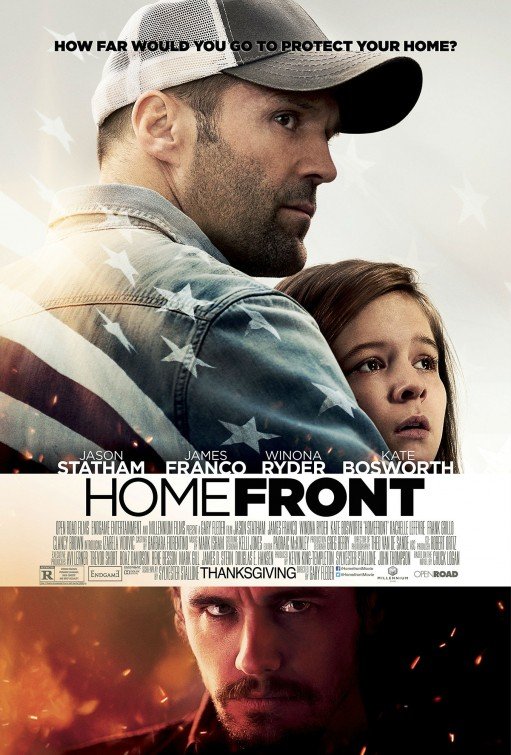 HOMEFRONT stars Jason Statham as Phil Broker, a retired undercover narcotics officer who moves his 10-year-old daughter to a quiet Louisiana town after his wife dies. An altercation with a school bully and the bully’s father enrages the father’s wife. She seeks help from her crazy brother, Gator, who’s been dealing meth in cahoots with the local sheriff. He sends two goons to straighten Broker out, but they don’t fare so well either. Intrigued, Gator investigates Broker’s past. He makes a deal with the jailed leader of the biker gang that Broker put in jail. The leader sends more goons to kill Broker and his daughter.

HOMEFRONT is very suspenseful, with lots of intense action and some interesting characters. Jason Statham shows a different side to his persona, as does James Franco as the local meth kingpin. There are good guys and bad guys in HOMEFRONT. So, the movie has a strong moral worldview. However, outweighing the positives are abundant foul language, very strong violence, and a brief sex scene. HOMEFRONT is designed like a modern-day western, but it’s inappropriate for families.

HOMEFRONT is the classic, archetypal American plot of a woman and/or a child threatened by dark forces. In this instance, it’s a former undercover policeman trying to protect his daughter from drug dealers linked to a previous case. Though this plot has an inherent moral character to it, HOMEFRONT has a lot of strong foul language that takes away from the experience.

The movie opens with DEA agent Phil Broker helping take down an evil biker gang selling drugs. In the process, however, the leader’s son gets killed, and the leader vows revenge.

Two years later or so, Broker’s wife has died, and he’s retired, so he and his 10-year-old daughter, Maddy, move to a small town in the Louisiana bayou. Broker wants his daughter to be able to have her own horse to ride, and that’s just what she does.

Broker has trained Maddy to defend herself; and so, when a schoolboy bully knocks her down, she breaks his nose. The boy’s mother is furious about what happened. She gets even more furious when Broker knocks down her husband when she eggs him to start a fight with Broker. So, she turns to her mean brother, Gator Bodine, the local drug dealer. Gator sends two goons to rough up Broker, but Broker handles them pretty easily as well.

Intrigued by this stranger, Gator investigates Broker. He discovers Broker’s past and reaches out to the biker gang’s leader, now in prison but still running drugs from his cell. The leader sends some men to kill both Broker and his daughter. Can Broker protect his daughter and stop these thugs?

HOMEFRONT stars Jason Statham as the tough and heroic but caring policeman protecting his daughter. James Franco plays the crazy local drug dealer, but in a way that’s completely different from what you expect. Their acting helps life HOMEFRONT above the usual formulaic movie from Hollywood.

There are clearly bad guys and good guys in HOMEFRONT. The story is designed to harken back to American westerns like HIGH NOON. As such, it reflects the archetypal American story of a woman and/or a child being threatened by dark forces, as partially described by Richard Slotkin in his seminal, but politically correct book, REGENERATION THROUGH VIOLENCE: THE MYTHOLOGY OF THE AMERICAN FRONTIER, 1800-1860. Of course, such stories go back to stories about mythical dragons and monsters that threaten a town and the people within it.

The filmmakers behind HOMEFRONT, which is based on a novel by Chuck Logan, adapted by Sylvester Stallone, admit their movie is like a modern-day western. As in many a western, in HOMEFRONT, a stranger rides into town and starts getting into trouble, but the bad guys are pushing around the wrong man, and the stranger ends up straightening things out and making the town a better place to live. Putting the man’s daughter in danger just adds to the jeopardy in HOMEFRONT.

HOMEFRONT is very suspenseful, with lots of intense violence and some interesting characters. However, it also has lots of strong foul language and a brief sex scene. So, HOMEFRONT is not acceptable viewing.