"The Drac Pack Is Back" 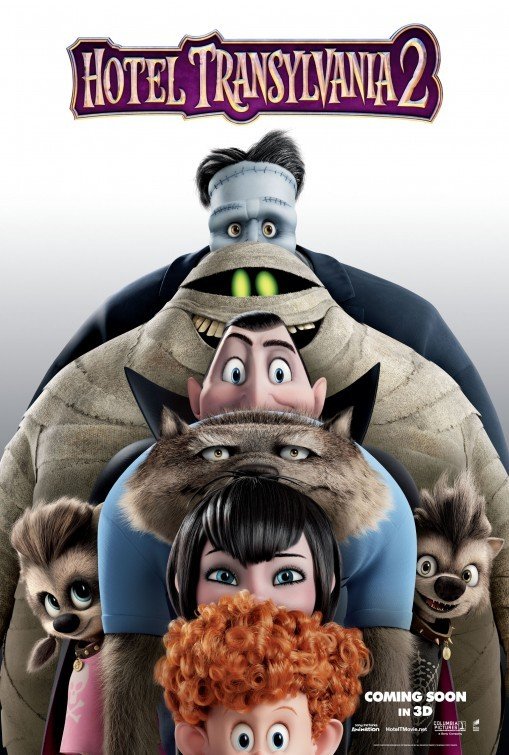 HOTEL TRANSYLVANIA 2 is the follow-up to the 2012 comedy. In this animated sequel, Mavis and Johnny marry and have a son. Since Johnny’s human and Mavis is a vampire, no one knows what their son, Dennis, will be. All eyes are on the boy as he approaches his fifth birthday and is running out of time to get his fangs. Dracula, his grandfather, tries to get Dennis to grow fangs, but to no avail. When Mavis realizes her son might be a human, she considers living among normal humans. This upsets Dracula and Dracula’s own father.

HOTEL TRANSYLVANIA 2 is an entertaining, humorous sequel, but with some mixed messages. On the positive side, the movie promotes the importance of family. Also, Dracula’s daughter wants her son to be able to live normally. On the other hand, the movie’s filled with monsters and occult references, but used to make fun of traditional monster stereotypes like Dracula and Frankenstein’s monster. Also, Dracula tries to teach his grandson to be mean and scary. Finally, HOTEL TRANSYLVANIA 2 is more violent than the first movie.

(Pa, Ro, PC, B, OO, VV, N, MM) Light mixed pagan worldview with Romantic message about accepting people for who they are but that could be interpreted in a politically correct or a moral way, mixed with some moral elements supporting traditional family, love overcoming hate and being “normal,” mixed with some references to the occult throughout the movie in a comic context with old monster stereotypes such as Dracula, Frankenstein’s monster, the Wolfman, the Mummy, the Bogeyman, the Invisible Man, etc., but main father figure uses magic; no foul language, but some scatological humor including monster peeing in woods, monster makes a joke about breasts; moderate violence including little girl gets attacked my werewolf pups, nursery rhymes describing eating people and bleeding brains, monsters destroy a summer camp by setting everything on fire, Frankenstein monster set on fire, vampires possess a human character, vampire bat tries to eat humans, little boy beats up vampire bats, one monster eats another monster, team of monsters beat up a gang of vampire bats; no sexual content; Frankenstein is shirtless in one scene, monster during credits is wearing a speedo; no alcohol use or drunkenness; no smoking or drug use; and, strong miscellaneous immorality including Dracula tries to teach grandson to be mean and doesn’t want him to learn to share, Dracula lies to his daughter while she is on vacation, Dracula drops grandson off of a tower to make him learn to fly like a human vampire bat, Dracula tries to hypnotize camp director, Mavis tries to scare airport worker, Dracula lies to his own father, Dracula and his father try to scare grandchild, grandchild runs away, vampire bat kidnaps grandchild and one of the werewolf pups.

HOTEL TRANSYLVANIA 2 is the follow up to the 2012 animated comedy about a human who falls in love with a vampire.

In the sequel, Mavis and Johnny get married and have a son, who they name Dennis. Since one of his parents is a human and the other is a vampire, no one’s sure if Dennis will grow up to be a human or a monster. Dracula is sure his grandson will continue the vampire lineage, but Mavis wants him to grow up to be normal.

As the boy grows up, Mavis begins to consider moving her family to California. Dracula doesn’t want his daughter to move away from the family hotel and does everything in his power to keep her family there. As his grandson’s fifth birthday approaches, Dracula begins to worry Dennis might not actually be a vampire after all. When Mavis and Johnny go on a vacation to visit California, he goes to extreme measures to try to prove his grandson is a vampire.

The family is torn apart when Mavis realizes what’s happening at the hotel while she’s away. After seeing the way her father is treating her son, she’s determined to move to a place where Dennis can have a normal upbringing. At his fifth birthday party, everything goes downhill when Mavis’ grandfather, who hates humans, shows up. He becomes furious when he finds out Mavis married a human and his grandson might not be a vampire. Dennis has to find a way to bring his family back together and not leave the place he loves.

HOTEL TRANSYLVANIA 2 is an entertaining sequel that continues the story of the first movie. However, it has some mixed elements. On the positive side, the movie promotes the importance of family. Also, Dracula’s daughter wants her young son to be able to live a normal life and be a human being rather than a vampire. On the other hand, the movie is filled with monsters and references to the occult often, but used for comical effects to make fun of traditional monster stereotypes, such as Dracula, Frankenstein’s monster, the Wolfman, etc. Also, throughout the movie Dracula encourages Dennis, his grandson, to be scary and to be unkind to people. He often yells at the other monsters for becoming nice and getting along with humans. At the end of the movie, none of this is really resolved and there is no mention that being a kind person is better than being mean and scary. The overall theme of the movie, however, is to accept people for who they are. This can be interpreted in either a Romantic, politically correct way where accepting people as they are has no moral implications or in a moral way where we accept people as God has made them or transformed them.

Finally, HOTEL TRANSYLVANIA 2 is more violent than the first movie. There are many scenes where monsters are scaring people and injuring people. The movie’s climax includes a big fight scene where the monsters and humans fight off vampire bats, who want to suck out the souls of the humans. Although animated, this scene is very violent and involves the monsters beating up vampire bats and eating them.

Overall, HOTEL TRANSYLVANIA 2 is a humorous movie, with some positive values, but extreme caution is advised because of the movie’s violence, references to the occult and mixed messages.