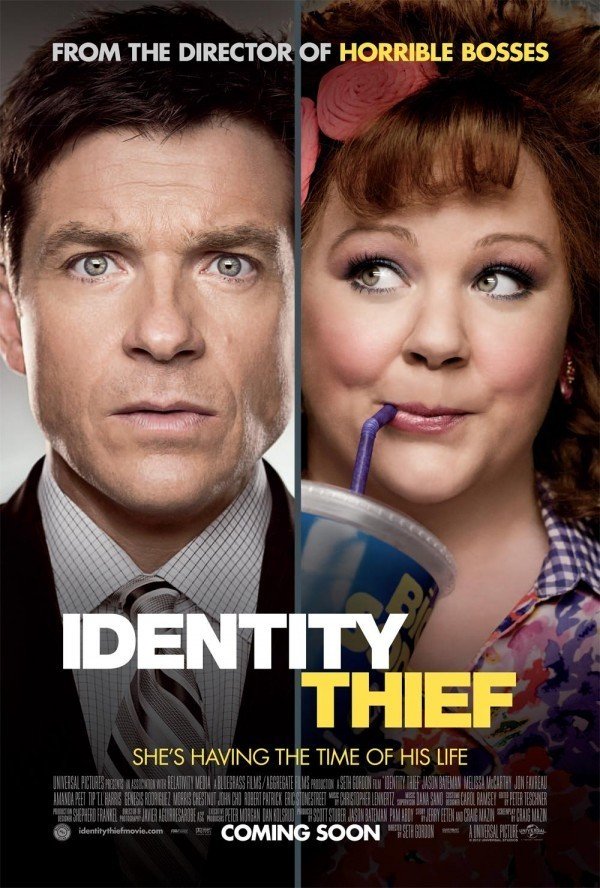 IDENTITY THIEF stars Jason Bateman as Sandy Patterson. Sandy is a perfect husband, father, and employee struggling to make ends meet in Denver. Diane, a woman in Miami played by Melissa McCarthy, steals Sandy’s financial identity. Legal loopholes prevent the local police from being able to nab Diane or help Sandy. So, he resolves to find her himself and drag her back to Denver to clear his name. Many comical misadventures ensue. Especially when it turns out two assassins and a bounty hunter, as well as the police, are after Diane.

IDENTITY THIEF is very funny and inventive. The filmmakers keep things fresh and unexpected. Also, their movie often extols justice, forgiveness, and doing the right thing. For example, the female thief eventually changes her ways. She also becomes friends with the hero and his family. However, IDENTITY THIEF has lots of strong foul language and a gratuitous sex scene in the middle. There’s also some stealing and fraud, though that’s mostly resolved positively by the ending. Ultimately, extreme caution is advised for IDENTITY THIEF because of its R-rated content.

(BB, C, Pa, LLL, VV, SS, N, AA, MM) Strong moral worldview with a redemptive element of forgiveness and repentance, mitigated by pagan, immoral behavior; about 49 obscenities and 11 profanities; some strong and light comic violence, includes female thief punches three different men in the throat, and they gasp for air as she runs away, woman kicks one man in the crotch to get away, woman uses duct tape to ridiculously tie up a bounty hunter chasing her, two or three car chases with plenty of damage to highway signs and road barriers, characters drive recklessly including against traffic, one van flips multiple times while a rental car gets smashed by a giant 18-wheeler truck, three people get shot, but one is grazed in the shoulder, while other two get shot in calf and toe; sex scene played for laughs when chubby woman picks up chubby man in bar and takes him to her hotel room where they dance suggestively and male lead locks himself in bathroom to comically avoid hearing them, but viewers can hear and camera cuts to two other people’s faces; rear male nudity shown after sex scene; alcohol use and some drunkenness; no smoking or drugs; and, identify theft, auto theft, stealing, fraud but mostly rebuked, including at the end.

IDENTITY THIEF is very funny and inventive, and extols justice and forgiveness at many points, but it has lots of strong foul language and a crude, gratuitous sex scene in the middle.

Jason Bateman stars as Sandy Patterson. Sandy is a perfect husband, father and employee who’s struggling to make ends meet in Denver. Then, his financial identity gets stolen by a woman in Florida named Diane, played by Melissa McCarthy of TV’s MIKE AND MOLLY. Some legal loopholes prevent the police from being able to nab Diane or help Sandy. So, he resolves to find her himself and drag her back to Denver to clear his name with his employer and the local police.

Many misadventures ensue. Mostly because Diane’s multiple criminal endeavors wind up coming back to haunt her, entangling Sandy at the same time. Apparently, two assassins and a bounty hunter are out to kill or capture her. Law enforcement officials are also chasing them.

IDENTITY is very funny. The filmmakers keep things fresh and unexpected at every turn. Sadly, however, the foul language isn’t. Also, there’s a comical sex scene between Diane and a man she picks up at a bar. Happily, the camera cuts away before showing anything extremely explicit.

Despite the obscene content, IDENTITY THIEF otherwise has many positive points to make. Sandy is shown as a devoted, faithful family man and father, and an outstanding employee to his bosses. He repeatedly tells Diane it’s not right to steal or lie to gain revenge or get what she wants in life. When he finally caves and uses fraudulent means to gain revenge on his cheap-paying former boss, Diane tells him he’s going to be miserable being dishonest even if it brings him riches. [SPOILERS follow.] Diane herself has a change of heart and decides to become honest when she realizes Sandy has young daughters whose lives would be ruined if his reputation remained destroyed by her actions. Eventually, they become friends. In fact, Sandy winds up feeling he wants to forgive Diane and not press charges. However, Diane turns herself into the authorities anyway, so true justice prevails. Even better, Sandy brings his family to visit Diane frequently in prison. He even encourages her to get a college degree and vows to help her get an honest job with his company when she gets out after serving her sentence. Thus, almost every aspect of their misadventures is positively resolved.

Ultimately, however, the positive, redemptive messages at the end make it doubly regrettable that the filmmakers inserted R-rated content into IDENTITY THIEF. IDENTITY THIEF could easily have been a PG-13, or even a PG-rated, comedy if the filmmakers had practiced more restraint.