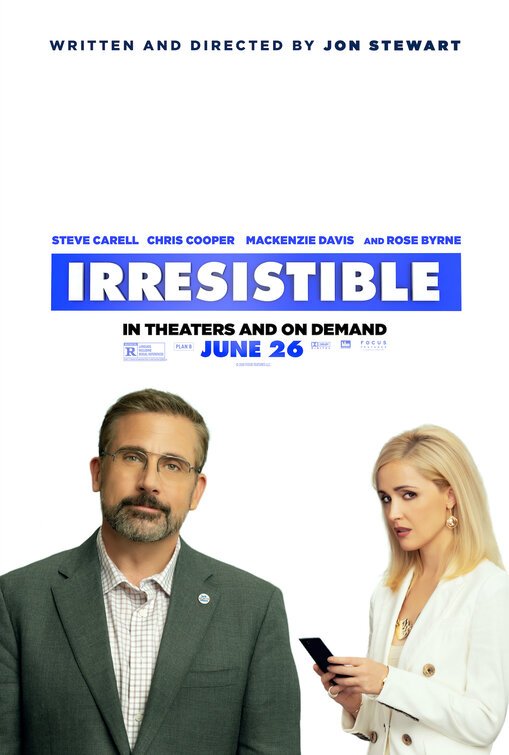 IRRESISTIBLE is a political comedy. It follows a Democratic strategist, Gary Zimmer, as he tries to turn a conservative Wisconsin town blue by helping a retired Marine veteran run for mayor. The closing of a military base has deprived the town of many jobs, and the town’s population has dwindled from 25,000 to only 5,000 people. The Republicans and Democrats go head to head as Faith, the Republican strategist who worked for President Trump in 2016, comes to town to ensure a conservative victory.

IRRESISTIBLE has moments of high comedy and does a good job keeping viewers on their toes with surprising twists and turns. Ultimately, however, the big twist leads to the movie’s ultimate message and worldview. Thus, in the end, the movie has a strong humanist, Anti-American, anti-capitalist worldview where it asserts that America’s electoral system is deeply flawed because it has too much money in it. IRRESISTIBLE also has lots of gratuitous foul language and lots of lying and deceit, including a story where fraud is rewarded. All in all, therefore, MOVIEGUIDE® finds IRRESISTIBLE funny, but excessive and unacceptable.

(HH, APAP, AcapAcap, PC, So, Ro, C, LLL, V, A, D, MMM):
Dominant Worldview and Other Worldview Content/Elements:
Ultimately strong humanist, Anti-American, anti-capitalist worldview where the movie eventually sides with the view that America’s electoral system is deeply flawed because it has too much money in it as the story explores the conflict between a Democrat campaign strategist and a Republican campaign strategist who raise big campaign donations in a fight over a small town’s mayoral race, but there’s a major twist that changes the viewer’s perspective on what’s really happening in the town, which surprises both the Democrat and the Republican strategist, though the movie seems to slightly favor the Democrat position on immigration, socialism and on giving government aid to everyone, a Romantic, rosy view of the Democrat Party and its efforts to make Republicans and conservatives the bad guys, but that’s not the main thrust of the movie’s overarching worldview, plus some Christian elements as the town priest is seen, the Democrat candidate uses the term “driven by faith” for his campaign, and there’s a reference to Scripture when talking about helping others
Foul Language:
67 obscenities, 14 profanities (mostly OMG), name-calling using D-bag, obscene gesture to genital area, character licks someone’s face to be rude, making fun of the small-town Midwest by name-calling and joking, and woman seen with her hand in a cow’s rear end in a veterinary examination
Violence:
Guns seen and used in an election commercial
Sex:
No sex scenes or sexual immorality, but one kiss between dating couple
Nudity:
None
Alcohol Use:
Social drinking and drinking with dinner at a bar seen multiple times
Smoking and/or Drug Use and Abuse:
Smoking cigarettes once but no drugs; and,
Miscellaneous Immorality:
Very strong miscellaneous immorality includes lying throughout, deceit, fraud, gossip, greed, stealing.

IRRESISTIBLE opens with voice overs from President Trump and Hillary Clinton urging Americans to vote for each of them before the 2016 presidential election. The audience then meets Gary Zimmer (Steve Carell), the democratic strategist, and Faith Brewster (Rose Bryne), the republican strategist, telling Americans they lie and spin everything to get their votes. More voiceover takes over announcing that Trump won the presidency, and Gary is seen in mourning as his candidate lost.

Cut to the small town of Deerlaken, Wisconsin. A city council meeting is being held where the Republican mayor is blocking government aid to people who don’t have proper identification because the town’s running out of money. Apparently, the closing of a nearby military base has deprived the town of many jobs, and the town’s population has dwindled from 25,000 to only 5,000 people. At the city council meeting, a retired Marine Colonel, Jack Hastings, stands up for the immigrants, and the video gets posted on YouTube.

Jack’s speech at the meeting catches the eye of Gary in Washington, D.C. So, Gary heads out to Deerlaken to convince Jack to run for mayor as the Democrat candidate. Jack agrees to run for mayor, but only if Gary stays and runs his campaign. Gary accepts and they’re off to the races. Gary begins setting up the basis of the campaign. As soon as Jack starts to pick up steam, a billboard for Mayor Braun pops up in the middle of town, and Gary knows exactly who’s behind it – his rival, Faith Brewster.

Faith shows up in town after hearing about what Gary is trying to do in the state that President Trump previously won. Faith takes on Mayor Braun’s campaign to ensure that the Republicans don’t lose control of the town. Gary and Faith go back and forth in the campaign trying to convince the townspeople to vote for their candidate.

In an effort to raise more money for Jack’s campaign, Gary flies himself and Jack to New York City to have a fundraiser with extremely wealthy people who donate to campaigns on a national level. Gary and Jack are able to raise millions of dollars and now hire more people to work on Jack’s campaign.

Right before the election, Gary finds information to use on Mayor Braun to ruin his campaign. When Jack’s daughter, Diana, hears what they’re about to release, she gets uneasy and doesn’t want Jack to do it. Diana takes matters into her own hands and heads over to Mayor Braun’s house to warn him. However, it seems she’s hiding a secret that the whole town is keeping that could ruin everything if it gets out too early.

Written and directed by TV political satirist Jon Stewart, IRRESISTIBLE has its moments of high comedy and does a good job keeping viewers on their toes with twists and turns throughout the plot’s development. However, the movie doesn’t bring anything new to Hollywood’s take on politics and bashing the right. It glorifies leftist ideals and paints rural America as a backward place that doesn’t have the conveniences of the big city.

Ultimately, however, the big twist at the end leads to the movie’s ultimate message and worldview. Thus, in the end, the movie has a strong humanist, Anti-American, anti-capitalist worldview where it sides with the view that America’s electoral system is deeply flawed because it has too much money in it. That said, IRRESISTIBLE does seem to slightly favor the Democrat Party’s position on immigration, socialism and on giving government aid to everyone. It also paints a Romantic, rosy view of the Democrat Party and its efforts to make Republicans and conservatives the bad guys. The movie does have some light Christian elements, though. For example, there’s a priest in the small town, Scripture is quoted, and the Democrat candidate says he’s “driven by faith.” Sadly, however, though it has no explicit sex or nudity, IRRESISTIBLE does have lots of gratuitous foul language and lots of lying and deceit, including a story where fraud is rewarded. All in all, therefore, MOVIEGUIDE® finds IRRESISTIBLE funny but excessive and unacceptable.