"Steve Jobs vs. Himself" 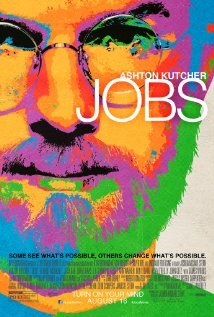 JOBS is a biographical drama based on the life of Apple founder, Steve Jobs. Spanning the years 1971 to 2001, the movie follows Steve from his startup company in his parents’ garage to the creation of the influential, multi-billion dollar company. The story focuses on Steve’s struggle to create perfect products that have never been made, and the people who stand in his way.

JOBS is entertaining and inspiring, though the story lacks a certain amount of emotion and tries to bite off more than it can chew. JOBS has a light pagan worldview. Steve Jobs was a Buddhist in real life, but the movie mostly ignores this fact. It only hints at some New Age Hinduism in Steve’s early years. On the positive side, the movie contains strong moral, capitalist and even pro-life sentiments. Though JOBS doesn’t turn Steve into a role model per se, he becomes an inspiration for people due to his desire to change the world with the talents God gave him. JOBS has plenty of foul language, some implied sexuality and drug use, so extreme caution is advised.

(Pa, BB, CapCapCap, FR, LLL, S, N, A, DD, M) Light mixed pagan worldview with strong moral, capitalism content that shows the dangers of putting work over family and friends, a pro-life sentiment when protagonist says, “Who has a baby and throws it away like it’s nothing?”, movie extols capitalist values that promote innovation, business, and free market ideals, plus some references to New Age Hinduism; 33 obscenities (including two “f” words) and five profanities; no violence; on two instances, man and woman lie in bed after implied sex, protagonist gets his girlfriend pregnant, light kissing; upper male nudity and a poster of a women in a bikini is briefly seen; beer is consumed; there’s a long scene where protagonist is high; and, protagonist acts immorally by lying, cheating on his girlfriend and generally treating his friends in a poor manner, and protagonist refuses to take responsibility for getting his girlfriend pregnant but finally owns up to it and marries her.

JOBS is a biographical movie based on the life of technological icon and founder of Apple Computers, Steve Jobs. Spanning from 1971 to 2001, with Ashton Kutcher playing the title role, JOBS tries to show the passion and motivation behind the complex innovator.

In the 1970s, Steve, a college dropout, is trying to figure out his life. Looking for purpose, Steve experiments with drugs and even travels to India, only to find himself working for an intolerable video-game maker. When his childhood friend, Steve Wozniak (a.k.a. Woz), shows Steve his new computer board, Steve sees the potential in it. Together, he and Woz form a small team, building computer boards and selling them. They call their new little company “Apple.” Before long, Steve finds an investor to give their startup company the proper financial backing it needs.

In 1977, Apple launches the Apple II personal computer, and it’s a massive hit. Now with a multi-million dollar company, Steve finds himself facing new problems, especially with board members who see him as a liability to the company due to his tough working manner. Steve’s perfectionism and obsession with details begins to destroy longtime relationships and worries the financially minded board. Eventually, the board sees fit to kick Steve out of Apple. Angered by their lack of vision, Steve ventures on his own, creating the computer company NeXT.

Years pass, and Apple is on a downward spiral. Steve, now in a stable marriage and emotionally under control, is asked to come back to Apple, this time as interim CEO. The rest is history.

JOBS succeeds in many aspects, but isn’t perfect. In one respect, it tries to bite off more than it can chew in terms of plot, yet in character, it lightly oversimplifies a complex man and only scratches the surface of his story. Though the climax may have been clear in the screenwriter’s eye, it fails to communicate that to the audience emotionally.

Factually, JOBS isn’t entirely accurate, but it properly portrays Steve’s unstoppable drive and unprecedented passion for quality. The movie lacks a certain amount of emotion and heart until its final moments. However, much of this is due to the fact that Steve Jobs led a complicated, non-transformational life until his recent death. Instead of having a large fictitious character arc, JOBS shows both the inspiring aspects and destructive elements of Steve’s life. It also leaves the final judgment up to viewers.

JOBS has a mixed pagan worldview. Though Steve Jobs was a Buddhist in real life, this is ignored for the most part and only hints to New Age Hinduism in his early years. Still, most of the movie is pagan. However, this is combined with some strong moral, capitalist and even pro-life sentiments. Steve’s drive for creating quality products relates to the biblical mandate in Ecclesiastes 9:10 – “Whatever your hand finds to do, do it with all your might.” On the other hand, Steve fails to balance this sentiment with family and friends, so the movie shows the negative effect of his obsession with work.

Steve Jobs was adopted. In the movie, he struggles with the fact that his biological parents didn’t want him. He laments in one instance, “Who has a baby and throws it away like it’s nothing?”

In JOBS, though Steve is not meant to be a role model per se, he is an inspiration for many due to his desire to change the world with the talents he had. JOBS contains plenty of foul language, some implied sexuality and drug use, so extreme caution is advised.