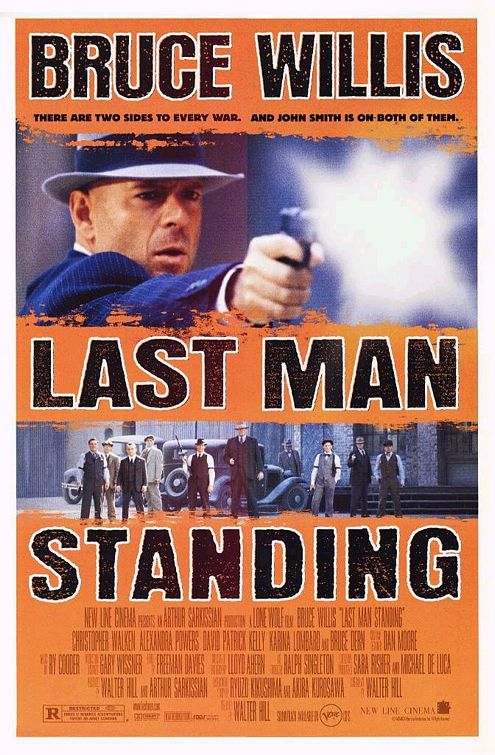 LAST MAN STANDING is a poor western loosely based on Akira Kurosawa's classic 1961 samurai epic, YOJIMBO. Playing John Smith, Bruce Willis acts as the hit man who will work for both sides just for the thrill of shooting and collecting big money. Despite some positive references to faith in God and a knowledge of right and wrong, it is extremely violent, has no concrete plot and is tediously long.

LAST MAN STANDING is a poor western with Bruce Willis playing John Smith. Bruce acts as the hit man who will work for both sides to collect big money. John Smith goes into a small west Texas town called Jerico and his car is attacked by a mob working for a local bootlegger, named Doyle . Later, Smith kills them and is hired by an opposing mob run by Georgie and Strozzi . These two gangsters pay him handsomely, but soon Smith is getting a counter-offer. The movie progresses with Smith alternating between the two groups, but when a state Marshal shows up, resulting in a massive mob shoot-out.

With a great cast and a intriguing premise, there is great promise for this movie, but the director merely has Willis squinting and performing his best Clint Eastwood impression. The dialogue is too obvious and appears to be written on a junior high level. Ironically, this movie had some positive portrayals of faith and belief in God. This movie is very violent. It is not for Western fans, because there isn’t a man with a white hat – everyone is evil. It remains a second-rate version of a movie that was done better twice before, YOJIMBO and THE GOOD, THE BAD AND THE UGLY. This movie is just plain ugly.

Writer: Walter Hill BASED ON THE NOVEL BY: