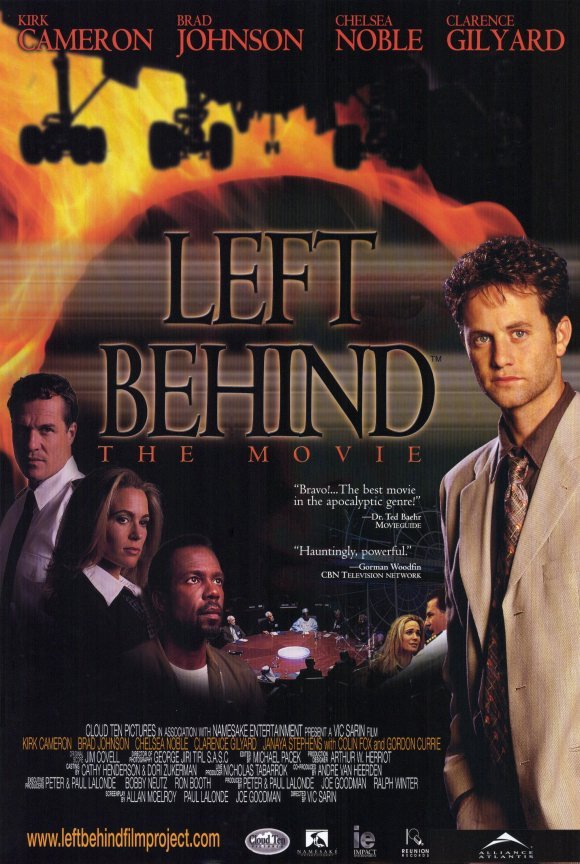 Kirk Cameron plays Buck in LEFT BEHIND, based on the best-selling novel by Tim LaHaye and Jerry B. Jenkins. Buck is a TV reporter reporting from Israel when a massive enemy air attack miraculously stops. Later, as Buck is flying to Europe to find out what happened, people disappear from the plane, and the pilot, Captain Steele turns the plane back to Chicago. In Chicago, Buck stays with Captain Steele, who finds that his wife and son have disappeared. In searching for his family, Steel discovers the truth, with the help of a pastor who’s been “left behind.” Buck also discovers the truth just before he’s drawn into the orbit of the secretary general of the UN.

LEFT BEHIND is the best movie made so far in the apocalyptic genre and has been crafted with a very careful, deft touch. It involves the audience in the storyline of the people. Kirk Cameron’s vulnerability, though unlike the Buck of the book, makes the movie very compelling. He is an everyman caught in circumstances beyond his control. The characters are well drawn. LEFT BEHIND presents the Gospel of Jesus Christ in a very entertaining, powerful, winsome way

(CCC, BBB, V, A, D, M) Strong Christian worldview that presents the Gospel of Jesus Christ in a powerful, winsome way as well as many moral principles including reaffirming marriage & family; no foul language, though there are some exclamatory appeals to God; violence which is treated in a discreet manner, including people disappearing as a result of so-called “rapture,” car crashes, man shoots man at point blank range but camera does not show blood & gore, some threats of violence as well as some war scenes, all done within a PG-rating; no sex; no nudity; no drugs; alcohol; smoking; and, pre-tribulation, premillennial eschatology.

Bravo! Cloud Ten Pictures and Namesake Entertainment have successfully adapted the best-selling LEFT BEHIND book to the big screen.

If you’ve read the book, a word of caution may be necessary. Your vision for the characters may not cohere with the characters in the movie, just as people’s vision of Jesus seldom agrees with movies and television programs about Him. (This problem of perceptual uniqueness is the very reason why Mattel will not let Barbie™ be made into a movie or television character.)

Given this caution, however, Peter and Paul Lalonde of Cloud Ten Pictures have made a compelling movie that captures the essence of LEFT BEHIND and presents the Gospel of Jesus Christ in a powerful, entertaining, winsome way.

The storyline has been made straightforward and simple. Kirk Cameron plays Buck, an ace television reporter who finds himself reporting from Israel when a massive Arab attack takes place. The Israeli defenses are jammed and cannot stop the attack. Miraculously, the enemy planes fall from the sky.

Buck flies back to the states to find out what happened, and, then, as he’s flying back overseas to continue to unravel the mystery, people disappear from the plane, and the pilot, Captain Steele (Brad Johnson), turns the plane back to Chicago.

This plot is similar, of course, to most pre-tribulation, apocalyptic movies. What’s exciting, however, is that the movie has been crafted with a very careful, deft touch. It never goes over the top. It firmly involves the audience in the storyline.

Even if some viewers do not agree with pre-tribulation theology, this movie should not offend them because it treats the theology as a plot device, not as a pre-requisite for salvation. Unlike most of these stories, the so-called Antichrist is not an almost all-powerful, conquering ambassador of Satan, and it is clear that God is all powerful and sovereign and that his church is victorious. Furthermore, the movie does show that God is the same yesterday, today and forever, that Christ is King of Kings and Lord of Lords, and that all authority has been granted to Jesus Christ.

Kirk Cameron’s vulnerability, though unlike the Buck of the book, makes the movie very compelling. He is an everyman caught in circumstances beyond his control. All of the characterizations in fact are well done. Captain Steele and his daughter Chloe are particularly believable, powerful characters.

The camerawork and photography are to be commended. They make the movie look expensive.

LEFT BEHIND will be worth watching on video, but even better on the big screen. So far, it is the best movie in the apocalyptic genre, so again, MOVIEGUIDE® says, Bravo!