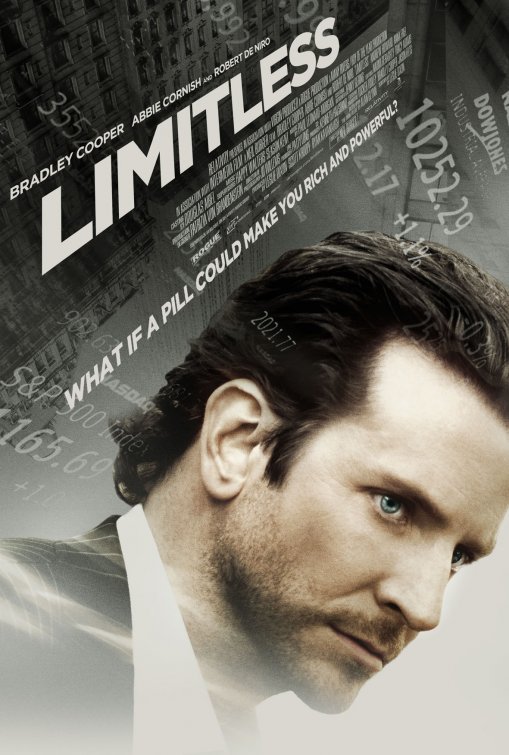 LIMITLESS stars Bradley Cooper as Eddie, a down-on-his-luck writer. Eddie’s on the verge of losing his girlfriend, home and career. Through a chance encounter, Eddie gets his hands on a groundbreaking drug called NZT, a pill that opens a person’s mind 100%. Fueled by NZT, Eddie quickly finishes his novel and learns new languages. Then, he takes a loan from a Russian mobster and quickly parlays thousands of dollars into millions. Soon, he’s working with a broker, played by Robert DeNiro, on the largest corporate merger in history. NZT has side effects, however. Making matters worse, Eddie finds himself the suspect in a murder scandal and the target of a Russian mobster who wants Eddie’s NZT for himself. Can Eddie get out alive, before his stock of NZT runs out?

LIMITLESS has an excellent idea for a story, but the actual plot doesn’t fully deliver on this imaginative idea. Also, though the acting is good, the third act takes a dark, violent turn that takes away from the movie’s popcorn appeal. The final resolution is satisfying, but the violence and immorality ultimately overshadow the outcome. MOVIEGUIDE® advises extreme caution for LIMITLESS.

(PaPa, Cap, FR, B, C, LL, VVV, S, N, AA, DDD, MM) Strong mixed pagan worldview with some capitalist content as man plays the free market to make money, although he uses a drug that helps his mind find algorithms for investment strategy that helps him make millions within weeks, plus some false religion where one character makes comment about person being able to use his entire brain power as “God” would, and some moral, redemptive elements, including another character says a young man’s skills are a “gift from God”; 12 obscenities, three profanities and one obscene gesture; some very strong violence combined with plenty of strong violence includes chase sequences, car crash, man considers committing suicide by standing on ledge of building, man’s body found after he was shot in the head, man beats up gang members in the subway, man vomits, people are stabbed, man’s cheek slashed, Russian gangsters beat man, implied that woman was slain in a hotel room, bodyguards’ hands are cut off and delivered in a mailbox, man, gunfire, gangster is shot, punching, kicking, man stabbed in eye with a needle, man drinks blood; sounds heard during depicted fornication and depicted adultery, unmarried kissing, implied fornication, and movie implies that a couple lived together out of wedlock; upper male nudity, man in underwear, female cleavage, women in bikinis, woman’s upper legs shown; strong alcohol use and drunkenness depicted; cigarette smoking depicted, movie implies man used to deal illegal drugs and plot revolves around a drug that unlocks 100% of the human brain capacity although it carries addictive side effects and people have severe medical conditions as a result of using it; and, lying, blackmail, threats, breaking and entering, theft, greed, bribery, and man uses drug as shortcut to success.

LIMITLESS, based on a novel by Alan Glynn, stars Bradley Cooper as Eddie Morra, a down-on-his-luck writer who is given a revolutionary new drug that allows Eddie to access 100% of his brain capacity. (This is reminiscent of Harvard University lecturer in psychology Dr. Timothy Leary’s claims about LSD that swept first the Ivy League and then other college campuses in the 1960s, before LSD was criminalized in 1966.) As others come after Eddie’s newfound success, he quickly learns that being “limitless” has its price.

Months behind on his rent and weeks past his book deadline, Eddie is on the verge of losing his girlfriend, his home and his career. When a chance encounter with his former brother-in-law takes place, Eddie gets his hands on a groundbreaking pharmaceutical called NZT, a pill that opens a human being’s mind 100%. Fueled by NZT, Eddie quickly finishes his novel, learns new languages and gets his life back on track.

Next, Eddie uses his newfound intellect to take on Wall Street. He takes a small loan from a Russian mobster and parlays thousands of dollars into millions within mere weeks. His get-rich-quick techniques garner the attention of major heavy-hitters on Wall Street. Soon, Eddie is working with a broker (Robert DeNiro) on the largest corporate merger in history.

However, Eddie’s life is not completely smooth sailing. As NZT’s side effects, such as massive blackouts begin, Eddie finds himself as the suspect of a murder scandal, the lynchpin of a major corporate take-over, and the target of a Russian mobster who wants Eddie’s NZT for himself. With time, as well as his supply of NZT, running out, Eddie must use all his inexhaustible intellect to get out alive.

LIMITLESS has an excellent idea behind the story – a hard-luck failure gets an opportunity to access endless intellect – yet the plot does not fully deliver on this imaginative idea. As sheer popcorn fodder, the movie is good but not tremendous. Bradley Cooper is very good. He captures Eddie’s full character arc with both charm and intensity. The third act, however, takes a dark, violent turn that takes away from the movie’s popcorn appeal. The final resolution is satisfying, but the violence and immorality ultimately overshadow the outcome.

The movie contains a mostly mixed, pagan worldview with a lot of violence, especially some graphic bloodletting in the final act. It also has some foul language, gratuitous sensuality and a lot of miscellaneous immorality such as lying, blackmail, theft, greed and bribery as well as an overall storyline centered around drug use, the NZT pharmaceutical.