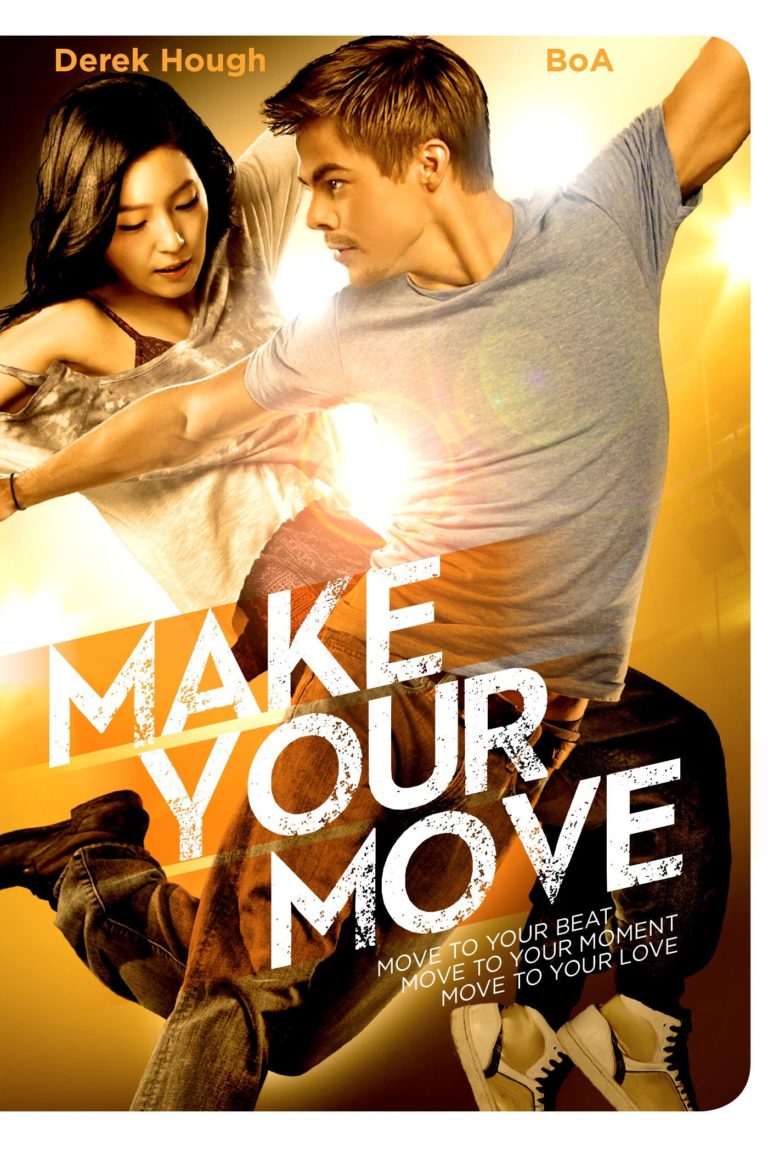 MAKE YOUR MOVE is an energetic dance drama starring David Hough, the charismatic five-time winner of television’s DANCING WITH THE STARS. David plays Donny, an ex-convict who skips parole to go to New York City to dance at his foster brother’s popular underground dance club. Complications ensue when Donny falls for Aya, the sister of his brother’s former Korean business partner. The two lovers become stuck between their brothers’ intense feud. Will the brothers ever give Donny and Aya a chance to make their move in career and love?

Despite its timeworn formula, MAKE YOUR MOVE is an energetic, entertaining musical drama, with plenty of modern dancing and music. The movie’s premise is somewhat moral and redemptive. For example, it’s the love between the two lead characters that solves the plot problem and brings everyone together. Despite that, MAKE YOUR MOVE focuses on feelings and being successful, so it also has some Romantic, pagan elements. Those elements include light and strong obscenities, some sensual dancing, and an implied sex scene. So, strong caution is advised, despite MAKE YOUR MOVE’s uplifting, entertaining moments.

(Pa, Ro, B, C, CapCap, Acap, LL, V, S, N, A, MM) Light mixed pagan worldview about two dancers in love, whose love conquers all, with pagan, Romantic, moral, and redemptive elements including two young male/female leads are seeking careers, fall in love, try to get their two brothers to reconcile, fight a bad guy who’s obsessed with the young woman, and things are resolved in an abandoned church that becomes a showcase for the her and heroine’s talents, plus some strong capitalist elements about career and running a business, but the bad guy is a conceited young broker on Wall Street; 25 obscenities (including one “f” word and some “s” words) and zero profanities; some violence includes fighting, gang shoots out the windows of a club, and some threats of violence; implied fornication after some sensual dancing; upper male nudity, and girl takes off her top, revealing bra; alcohol use; no smoking or drugs; and, capitalist rivalry gets out of hand, emotional extortion, and hero skips parole but later decides to do the right thing and go back and serve it out.

MAKE YOUR MOVE is an energetic dance drama about a young ex-convict trying to make a dance career in New York City, where he also falls in love with another dancer. MAKE YOUR MOVE has some moral elements, and the climax takes place in an abandoned church, but the movie otherwise takes place in a Post-Christian urban world.

The movie stars David Hough, the charismatic five-time winner of television’s DANCING WITH THE STARS. David plays Donny, an ex-convict on parole on the streets of New Orleans. Donny tries to earn a living as a dancing street performer, but his parole officer tells him to get a real job.

So, with help from a friend in New Orleans, Donny decides to secretly skip out on his parole. His destination is New York City, where his foster brother, an African American man named Nick, who runs one of the hottest underground dance clubs. Complications ensue when Donny falls for Aya, the sister of Oto, Nick’s former Korean business partner.

The two young lovers become stuck between Nick and Oto’s feud. Donny wants to do new things with dance by mixing styles. Aya has a girl group that mixes hip-hop dance with Japanese drumming. Will their brothers ever give them a chance to make their move in career and love?

MAKE YOUR MOVE is an energetic, entertaining musical drama, with plenty of modern dancing and music. If it reminds people too much like a lightweight WEST SIDE STORY, well, that may be a timeworn formula, but the movie is captivating nevertheless.

The movie’s premise is somewhat moral and redemptive in the sense that it’s the love between the two lead characters that solves the plot problem and brings everyone together. In fact, things are resolved when Donny decides to convert an abandoned church to showcase his and Aya’s talent and bring their brothers together. Despite that, the movie focuses on feelings and being successful, so MAKE YOUR MOVE also has some Romantic, pagan elements. Those elements include some relatively light and strong obscenities, sensual dancing, and an implied sex scene. That said, the young hero doesn’t get away with skipping parole. He ends up doing the right thing, and his girlfriend promises to wait for him while he serves out his parole.

MAKE YOUR MOVE clearly takes place in a Post-Christian urban world. It still manages, however, to deliver some uplifting, entertaining moments. Most of the dances (but not every one) are fairly clean and can be enjoyed by a broad audience.