"Scary But Salacious and Anticlimactic" 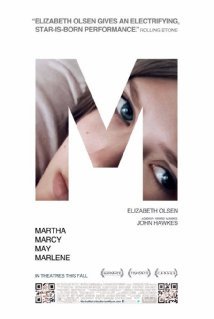 MARTHA MARCY MAY MARLENE explores the story of Martha, who escapes from a Manson-like cult that had renamed her Marcy May. Marlene is another persona the cult forced upon her, as part of an attempt to re-invent and control her identity and behavior. Martha tries to start life anew with her older sister and brother-in-law. After two years in the cult, however, she’s constantly fearful the cult will find her and kidnap or harm her again. She won’t tell her sister what happened to her, but the movie does.

MARTHA MARCY MAY MARLENE offers a perverted portrait of a highly troubled woman and the psychological dynamics of a Manson-like cult. However, it’s ultimately too bleak and hopeless to offer viewers any entertainment value. Conversely, horror genre fans will be disappointed by the complete lack of story resolution. All in all, it is a movie stuck in neutral by its mysterious ending. It also contains plenty of strong foul language, disturbing violence, salacious content, rape, orgy, beatings, and nudity. MARTHA MARCY MAY MARLENE will disgust and annoy moviegoers but offer them little sense of hope because of its maddeningly ambiguous ending.

(HHH, PaPaPa, LLL, VVV, SSS, NN, A, DD, MMM) Very strong humanist worldview ending in an ambiguous, but hopeless kind of way, about a woman’s experience and after-effects with a hedonistic, pagan “anything goes” Manson-like cult; at least 35 profanities and obscenities, including about 14 variations of the “f” word, several strong profanities and several light profanities; some very strong disturbing violence and other violence includes brief brutal murder in which a young woman is commanded to bludgeon a homeowner who caught her cult burglarizing his home, title character is drugged and wakes up getting raped from behind on the floor by cult leader, title female is chased through the woods by several cult members as she escapes, cult leader pushes title character against a wall and threatens her while choking her, implied shooting of a young male cult member by cult leader, and woman has a violently emotional breakdown at her sister’s house party and violently runs from and kicks her brother-in-law down a flight of stairs when she mistakenly thinks he’s molesting her; extreme sexual content includes depicted rape, title character engages in brief but fairly graphic orgy scene where multiple couples are fornicating in a room while their cult leader watches, woman walks in on her sister and brother-in-law making love under their covers and lies in bed next to them, upsetting them greatly as a result; upper and rear female nudity and multiple naked bodies are seen blurred and from behind in a group swimming flashback; alcohol use; title character is seen smoking in two scenes before hiding the cigarettes from others and women are drugged and later raped; and, cult members invade homes, stealing, cult leader and another cult woman brainwash woman into thinking that a rape was an act of love, woman appears to endanger her sister and sister’s husband, and female protagonist is in almost constant fear of being kidnapped back into a cult or otherwise attacked.

MARTHA MARCY MAY MARLENE caused a sensation at the perverted prestigious Sundance Film Festival this year. The debut movie from writer-director Sean Durkin salaciously explores the story of a young woman named Martha who escapes from a Manson-like cult that had renamed her Marcy May. Marlene is another persona the cult forced upon her, as part of an attempt to re-invent and control her identity and behavior.

As Martha tries to start life anew with her older sister and brother-in-law after two years in the cult, she’s constantly fearful that the cult will find her and either kidnap or harm her again. She won’t tell her sister what happened to her, but the movie’s ingenious structure parallels constant flashbacks to the cult life, with her new life of freedom in her sister’s rural lakeside home. The more we see of Martha’s time in the cult, the more disturbing and at times terrifying the movie becomes, as the audience is left uncertain whether the threats are real or imagined paranoia existing only in her imagination.

Ultimately, the movie ends far too abruptly as Martha’s sister and brother-in-law encounter a strange man standing in the road as they drive Martha to a mental health center. The viewer is left wondering if the man in the road was indeed a threat and is chasing them in the closing shot, or if he is a typical innocent man who just happened to be standing in the road before climbing in his car and coincidentally following them.

MARTHA features Elizabeth Olsen and John Hawkes, as the violent cult leader. Sean Durkin shoots the movie with a style that makes it feel as if the viewer is helplessly in the same room as the characters at all times. The bizarre score mainly consists of a swirling noise that sounds like an out-of-tune orchestra all playing at once. This cacophonous sound is interjected at particularly tense moments, and only in brief moments is a more traditional score heard.

The disturbing content in MARTHA MARCY MAY MARLENE offers little sense of hope because of its maddeningly ambiguous ending.