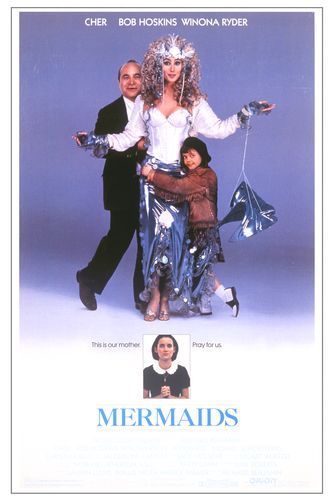 MERMAIDS is about one family’s search for stability and fulfillment. Set during the 1960s in Massachusetts, the film has recurring themes of lostness, alienation and the search for identity.

Cher plays Rachel Flax, an iconoclastic Jewish divorcee, who, each time she encounters a problem, packs up and moves. Thus, she and her two daughters by different fathers have lived in countless places. This time, they decide on Eastport, MA, from Rachel’s finger pointing there on a map by chance.

When the Flax family arrives in Eastport, the vivacious and flirtatious mother quickly finds secretarial work, and the girls adjust to school. Charlotte, at fifteen, is extremely religious, introspective and insecure.

On the one hand, she prays, “Hail Mary, full of grace,” but on the other, she struggles with lustful teenage thoughts and senses God’s wrath as she swings back and forth between her fleshly and saintly nature. Charlotte, though, delights in visiting the nearby convent, where she dwells on religious fantasies. Over and over, she wonders what her father looks like and wants to see him.

Katie, an exceptionally precocious and happy 10-year old, dreams of becoming an Olympic swimmer. Like Charlotte, she has no knowledge of her father and wants to hear her birth story again and again.

The girls and Rachel soon become acquainted with Lou Lansky, an aggressive shoe salesman who shows an interest in Rachel. The relationship flourishes, and they wind up in bed together.

Despite his aggressiveness, Lansky brings maturity to the relationship. The girls and Rachel, for example, literally eat their meals on the run, but Lansky teaches them to sit down at the table and “act like a family.” As the story develops, Lansky grows to love the girls and Rachel, but she shrinks from marrying him because she fears commitment.

A crisis comes one night, however, when the girls get drunk and go to the convent bell tower. Charlotte climbs up and has sex with Joe, the young caretaker. Meanwhile, tipsy Katie wanders across the dam and falls into the rushing water.

Nuns rescue Katie, and she recovers, but Rachel is furious with Charlotte. She screams at Charlotte: “You’ll be known as the town tramp!” Charlotte fires back, “That’s impossible. They already have one!” Indignant, Rachel packs and goes to the car with Charlotte running after her. “Talk to me, mother,” she yells. “I’m not invisible!”

At film’s end, the characters do achieve a degree of wholeness and resolution, but not without cost. Rachel did not have to have continuous affairs and keep moving to escape problems, and Charlotte did not have to lose her virginity to find love.

MERMAIDS: What does that mean? According to director Richard Benjamin, “The film is about mothers and daughters… and men. These are people who don’t fit into any category, exactly. The older daughter is half girl, half woman. Her younger sister is kind of half girl, half fish. They’re in the water, out of the water. They’re mermaids, looking for a place to be. What it means is you can’t put everybody into a category.” Moreover, he says, the film “is about a family becoming whole.”

Yet, this film’s solution to becoming whole is representative of so many in its sanctioning of fornication without shame as an answer to problems. This film more than ever points up the need for Christians to set good examples and to be salt and light in an ever-darkening society.

Writer: June RobertsBASED ON THE NOVEL BY: Patty Dann