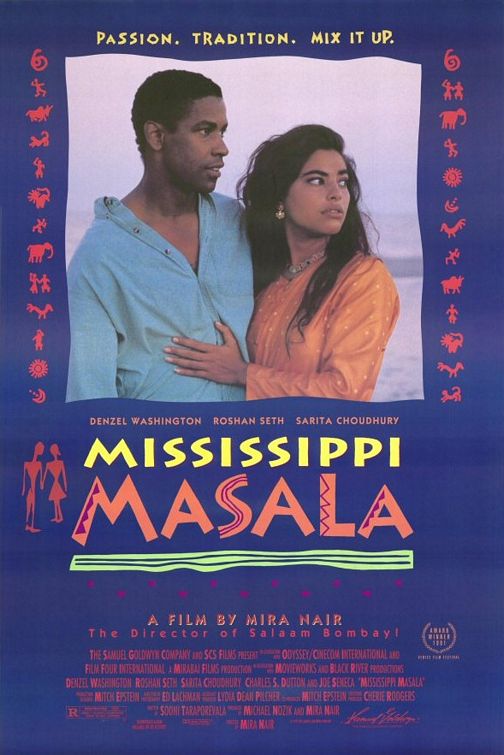 MISSISSIPPI MASALA explores the cultural dilemmas of an Indian/Ugandan family living in America. Although love conquers adversity, the film is fatally marred by a lengthy fornication scene. The lying, deception and running away, contradict the family values and confuses the issues the screen writer are trying to establish.

MISSISSIPPI MASALA opens in Uganda in 1972, as Idi Amin forces the Asian population to leave the country. Referring to the shades of spices, “masala’ symbolizes the Indians who sought success outside their country. Kinnu and her family moved to Uganda as merchants. Kinnu’s husband, Jay, is a lawyer of Indian descent and Ugandan birth. He is saved from execution by a black friend, Okelo. Even so, Okelo endorses ousting the Asians, “Africa is for Africans.” Eighteen years later, Jay, and Kinnu manage a motel in Greenwood, Mississippi. Their only child is 24-year-old Mina. One evening, Mina meets Demetrius, a handsome black carpet cleaner. She lies to her parents and sneaks off to Biloxi with Demetrius, where they graphically fornicate. Back in Greenwood, their relationship sets off a violent tremor in Mina’s family. They insist that Mina marry within the Indian race. Meanwhile, Demetrius’ business suffers.

MISSISSIPPI MASALA would be better if Mina and Demetrius had waited until marriage to consummate their “love.” Lying and deception, just doesn’t work. However, the film does remind us that love conquers adversity and calls on families to stick together. Also, the performances are believable, and the rich cinematography is superb.