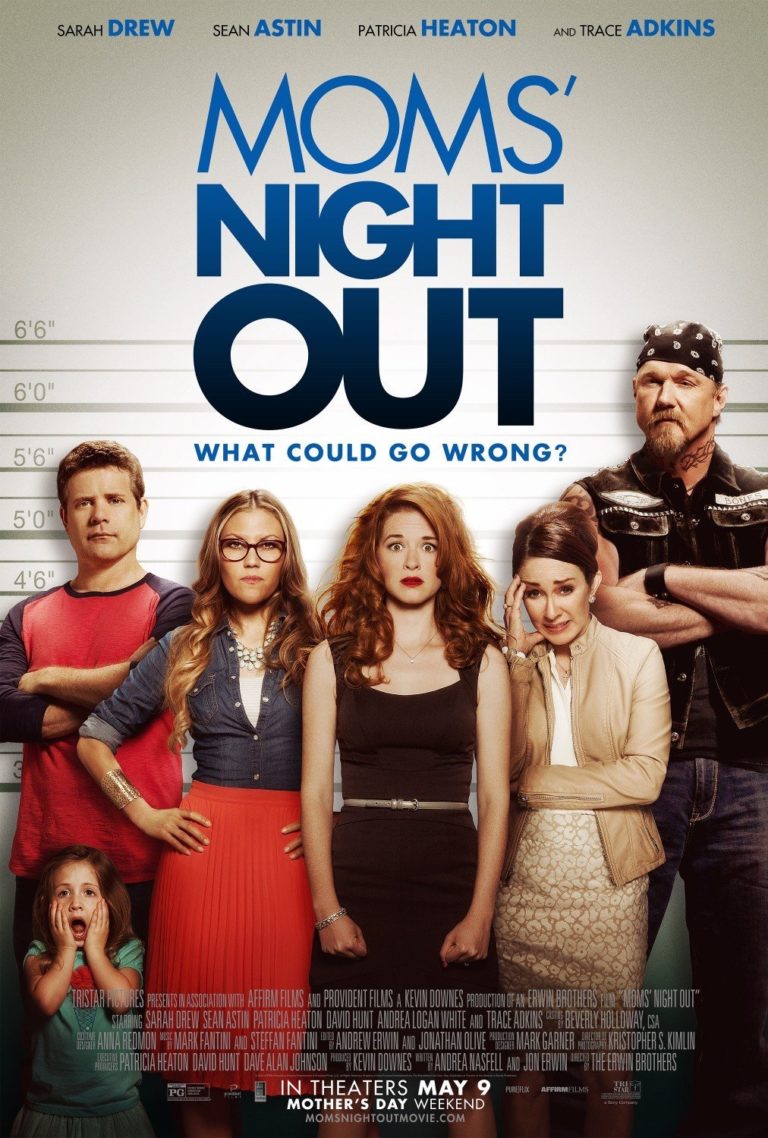 MOMS’ NIGHT OUT is a comedy adventure that will bless many mothers and husbands. Allyson is a mother of three, and she’s exhausted. Making things more difficult is the fact that her loving husband, Sean, is always traveling for work. Sean sees his perfectionist wife overworking herself. So, he suggests she take some time to do things for herself. Allyson takes this suggestion to heart. She plans a fun evening with her best friend, Izzy, and her mentor, Sondra. Saturday comes. The children are left with the husbands, but some unexpected events send the moms and dads on a hilarious adventure with trials and tribulations.

MOMS’ NIGHT OUT has a colorful cast. They bring their characters to life in a delightful way. The movie delivers an uplifting message of motherhood, infused from a Christian worldview, but sometimes falls short. Mostly, however, MOMS’ NIGHT OUT is a big “Thank You”note to mothers around the world. The ending has a tip of the hat to fathers as well. MOMS’ NIGHT OUT is uplifting entertainment with only some questionable elements, including brief bathroom humor and frenetic comic violence.

(CCC, BBB, Pa, L, VV, D) Very strong Christian, biblical worldview extolling marriage, motherhood, fatherhood all from a Christian worldview, a scene takes place in church during a sermon, marred by plot devices that demean family and children; two barely audible utterances of “God” that could be taken as light profanities, plus some light potty humor; violence with a somewhat comical tone that is often over the top includes a car chase involving the police, but it’s just a misunderstanding, a man’s arm is dislocated, a police officer accidentally taxes a woman, a man is hit intentionally by a taxi, talk about playing a violent video game, talk about watching a violent movie with children, a guy is head-butted, a man is punched, men are tied up, man is cared of children; no sexual content, just a married couple shares a kiss; no nudity; background alcohol; smoking and hints of drug abuse, but no drug use; and, mother seems to put herself before her children.

MOMS’ NIGHT OUT is a funny adventure that will bless many mothers, and some husbands also will enjoy.

Allyson is a mother of three, and she’s exhausted. Making things more difficult is the fact that her loving husband, Sean (played by Sean Astin), is always traveling for work. Sean sees his perfectionist wife is overworking herself. So, she decides with his blessing to take some time to take time out for herself.

Allyson takes this suggestion to heart. She plans a fun evening with her best friend, Izzy, and her mentor, Sondra (Patricia Heaton). Saturday evening comes around. Izzy and Allyson leave their children with Izzy’s husband, Marco, who’s terrified of children, Sean, who’s not great at controlling the children, and Sean’s irresponsible best friend, Kevin. Allyson does her best to stay calm and trust that her husband can keep things under control at home.

The three women stop off at their restaurant, but they find out that their reservations aren’t for another week. To make things worse, when they go back to the car, they realize it’s missing, and their cell phones were in the car.

Meanwhile, back at the house, the men face their own challenges when the children get out of control. Along the way, a baby goes missing, and it will take a rough motorcyclist (Trace Adkins), a British cab driver, and a trip to the police station to reunite the families safely.

MOMS’ NIGHT OUT is something of a step up for writer/director duo Jon and Andrew Erwin of OCTOBER BABY. A colorful and funny cast sometimes brings their characters to life in a delightful way. Sean Astin and Patricia Heaton especially give heart and comedy to their performances. Regrettably, the pacing in “the middle” (pun intended) of the movie was too slow and then too frenetic, and the final car chase is a little drawn out and not as exciting as it should be. There’s also some gratuitous comic violence that goes a little too far, in a mean-spirited way.

The movie commends motherhood, but regrettably has some self-contradictory elements that seem to undercut its premise. Thus, Allyson’s actions sometimes contradict the movie’s premise. When she finds her children, for instance, she just hands them off to someone else.

That said, Allyson’s character represents all the mothers who overwork themselves to raise healthy children. MOMS’ NIGHT OUT encourages mothers to know that they don’t have to earn God’s love by being “perfect” mothers. Fathers also play a big role with some self-deprecating humor that father should expect, while also showing the responsibility that husbands have to uplift and encourage their wives.

In many ways, MOMS’ NIGHT OUT serves as a big “Thank You” note to all the mothers in the world. It commends the institution of motherhood and fatherhood, while also having fun with the pitfalls every parent faces.

It’s worth noting that many mothers overwork themselves to the point of exhaustion and sometimes even depression. That’s why it’s so crucial we encourage our mothers, wives and daughters. One way of doing this is to provide some much needed humor. As Sean Astin’s character points out, a mother’s job is important. Maybe even the most important.

Caution is advised for younger children for some colorful jokes and over the top comic violence, especially in one sequence involving a villain.