"Could Have Been Great" 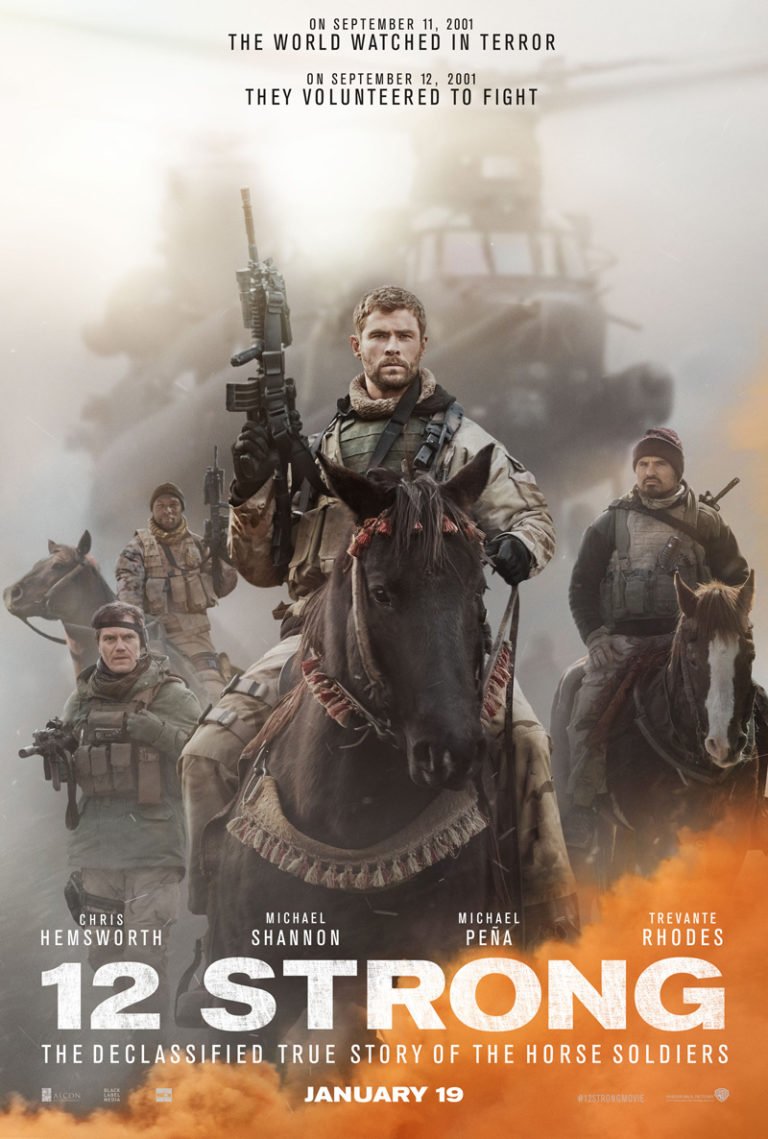 12 STRONG is a war movie about America’s first skirmishes with the Taliban and al-Qaeda in Afghanistan in 2001 and 2002. Mitch is on leave during 9/11, but he immediately goes back to reassemble his 12-man Special Forces team to go to Afghanistan and attack al-Qaeda and wipe out the Taliban. Mitch convinces his superiors that he and his team should go to Afghanistan. When they get there, they must deal with a local war lord opposed to the Taliban. The war lord only gives them six horses to help him defeat the Muslim fanatics.

12 STRONG plays like an old-fashioned western. However, it tries to show too much of the pain of going off to war and looks like it’s going to be a movie about family separation. The patriotism, loyalty and commitment of the Special Forces team in 12 STRONG are extraordinary, and the last battle is worth the entire movie. 12 STRONG could have been a great movie if it had not meandered with too much foul language and so many references to the Muslim faith without Christian references.

(BB, PPP, FRFR, Ab, C, LLL, VV, A):
Dominant Worldview and Other Worldview Content/Elements:
Strong moral worldview overall with very patriotic elements and strong representation of the evils of the Taliban and al-Qaeda based on Islam and moral arguments as well as courage, valor and loyalty, but there are many invocations of Allah, the false god of Islam, even used when executing a woman for teaching children history and math and used in battle, as well as a conversation between the war lord and the special forces captain that Americans see value in life but Muslims see value in dying because that’s where they obtain the promises, plus movie mostly uses references to the God of the Bible as a curse except for one line and one Thank God;
Foul Language:
55 obscenities (including many “f” words) and 30 profanities (including many taking Jesus Christ’s Name in vain);
Violence:
Lots of wartime action violence that never goes over the top and the execution of a teacher for violating the Qur’an because it doesn’t allow women to be taught and discussions of violence;
Sex:
No explicit sex but men going off to war ask their wives subtly for relationship but the wives refusing until they return;
Nudity:
No nudity;
Alcohol Use:
American soldier gives war lord a bottle of vodka;
Smoking and/or Drug Use and Abuse:
No smoking or drug abuse; and,
Miscellaneous Immorality:
Nothing else objectionable.

12 STRONG is a war movie with strong patriotic content and values that could have been great if it had not meandered so much and contained so much foul language.

The movie exposes the Taliban and al-Qaeda by remembering various terrorist events with short snap shots and documentary footage ending with the September 11, 2001 attack on the World Trade Center. Captain Mitch Nelson is home with his little daughter, Maddie, and his wife. Maddie points the TV showing the planes hitting the World Trade Center. Mitch is on leave, but he immediately goes back to reassemble his 12-man Special Forces team to go to Afghanistan and attack al-Qaeda and wipe out the Taliban.

The movie then cuts to long sequences of leave taking by several members of the 12-man team as well as Mitch doing everything in his power to convince his superiors that he should take command and go to Afghanistan. When he gets to the American base in Uzbekistan, he must compete with several other captains to see who’s going to be sent to try to take the city where the Taliban is headquartered, Mazar-i-Sharif. Although Mitch hasn’t had personal fighting experience, his knowledge of history of the weather gives him the edge and he’s sent to join up with a war lord named General Abdul Rashid Dostum to go with him to take the Taliban headquarters.

Mitch’s superior thinks he can get there in six weeks, but because of the winter and the mountains, Mitch believes he only has three weeks. When his 12-man team gets to the base of operations, called the Alamo, the war lord only gives them six horses to accompany them. The team thinks they’re going to get killed by their Afghan friends who are just testing them.

When they get to the first engagement, Mitch has to get close to the enemy to spot the bombs being dropped from B-52 planes at 30,000 feet. The war lord is impressed and they go from battle to battle until they get to a seemingly unwinnable situation where the Taliban, controls a large valley that’s several miles long with tanks and artillery. Mitch and his men are riding horses against tanks and artillery. The final battle is thrilling.

In many ways, 12 STRONG is an old-fashioned western with the horse soldiers as they were really called in Afghanistan facing modern weaponry. Of course, these horse soldiers had the advantage of American air power, which eventually impresses the war lord. Mitch and the war lord challenge each other to do the right thing. This is an almost impossible task.

12 STRONG tries to show too much in the beginning of the pain of going off to war and almost appears that it’s going to a movie about family separation. Then, it tries very hard to set up the reason the Taliban and the Muslim terrorists are bad, even showing the execution of a female teacher by a Muslim leader saying the Taliban doesn’t allow women to be educated past the rudimentaries.

However, most of the movie’s invocations of God, even by the friendly war lord, are the false god, Allah, who’s invoked to execute the teacher, to fight wars and to assert authority over the Americans. The American soldiers only use the Name of God as a curse word, except one line by Mitch and one Thank God. So, the movie is dissipated by the one-sidedness of the theological worldviews underpinning the war. The good news, however, is that there’s no overt sex or drugs except for medical uses. Also, it’s stated that the war lord looks down upon alcohol as a Muslim. Finally, the patriotism, loyalty and commitment of the Special Forces team are extraordinary, and the last battle is worth the entire movie.