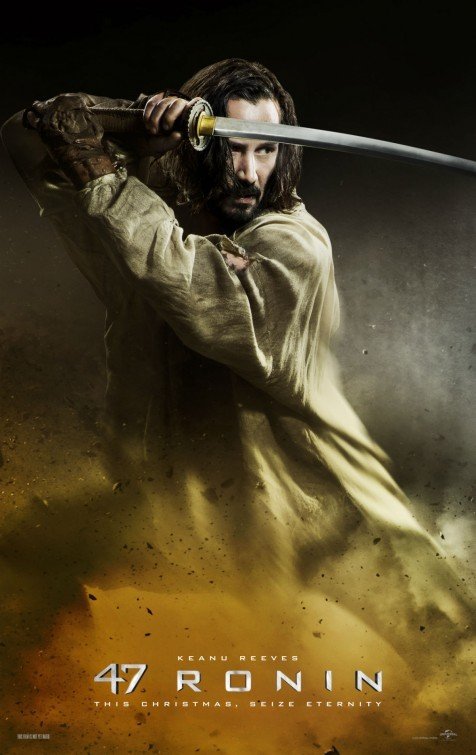 47 RONIN stars Keanu Reeves as Kai, a half English and half Japanese man, abandoned as a youth by his Japanese mother. Sheltered by a powerful warlord, Kai grows up to become a fierce warrior. However, the other samurai look down on him. Another warlord has designs on the kingdom of Kai’s warlord. He’s assisted by an evil witch. The witch puts a spell on Kai’s warlord, and he’s caught trying to kill her warlord. The Emperor orders him to commit suicide. Kai is sold into slavery, and the dead warlord’s samurai are banished. Forty-six of the banished samurai plot their revenge. Their leader asks Kai to join them.

(PaPaPa, FRFR, B, OO, VV, A, MM) Very strong pagan worldview, including some implications of reincarnation, supporting the Shinto Buddhist pro-samurai beliefs that led to the militaristic policies of Fascist Japan in the 1930s and during World War II, with some moral talk about justice and righting a great wrong, plus strong occult content (but the occult is mostly seen as evil, something to be destroyed); no foul language; strong action violence involving samurai battles with swords, man battles dragon with his sword, arrows used in battle, large demonic monster threatens samurai soldiers and must be killed, and people have to commit suicide to maintain their honor under a despotic system of hierarchy; no explicit sex but some passionate kissing; upper male nudity; alcohol use and apparent drunkenness in a low-class dive; no smoking or drugs; and, prejudice but rebuked, betrayal, deceit, brief talk about Heaven and Hell in a pagan way, and the group is valued more than the individual and his or her liberty.

47 RONIN is a better, more exciting movie than one might have expected, but the climactic battle is a bit anti-climactic. More disturbing, however, is the fact that this Japanese legend about 47 brave samurai soldiers ends up supporting the samurai concept of “bushido” (or social obligation) that led to the militaristic, fascist regime in Japan during World War II that required total obedience from its members. Thus, 47 RONIN ends up having an abhorrent philosophy, despite some moral talk about justice.

In the story, Keanu Reeves plays Kai, the product of a liaison between an English sailor and a Japanese peasant woman. The woman abandoned Kai in the woods, and he was raised by a cult of demons worshipping Buddha. Early in the movie, Kai escapes the demons and is taken in by Lord Asano. He grows up to be an amazing warrior, but the other samurai in Asano’s province reject him because of his “half-breed” background. In the meantime, Kai and Asano’s daughter, Mika, have fallen in love, though Kai advises her that, because of his lowly status, it’s not good for her even to be seen with him.

One day, the country’s leader visits Lord Asano. With him is Lord Kira, who has designs on Asano’s territory and is in league with a female witch. The witch puts a spell on Asano’s samurai leader, and Kai decides to secretly replace him an important tournament battle with Kira’s massive champion. However, Kai is exposed and beaten.

That night, Lord Kira’s witch puts a spell on Lord Asano, and he is found trying to kill Kira. Asano has to commit suicide, his samurai are banished, Kira takes over Asano’s fiefdom, and Kai is sold into slavery. Meanwhile, Mika is given one year to mourn her father. At the end of that year, she will have to marry Lord Kira.

Asano’s 46 samurai have now become ronin, the word for a samurai without a master. The leader of the 47 ronin decides to put aside the past and ask Kai to help them. Thus begins an effort to kill Lord Kira and take back Asano’s kingdom.

47 RONIN has some exciting moments, though the characters may seem a little cardboard to moviegoers. The acting is just serviceable. A bigger problem is that the final climactic battle takes place at night and is a little underwhelming.

Some have complained that 47 RONIN has taken a well-known historical legend of Japan and given it a fantasy treatment, complete with some Japanese occultism, including an evil witch. However, the movie is being billed as a fantasy adventure anyway, so the criticism doesn’t wash. What’s more disturbing, however, is that the ending validates the Shinto Buddhist, pro-samurai beliefs that led to the militaristic policies of Fascist Japan in the 1930s and during World War II. Thus, for example, despite some moral talk about justice and honor, the movie still extols the concept of “bushido,” or social obligation, to a strict, despotic system of absolute obedience to a rigid hierarchy. In effect, allegiance to the group and its leaders becomes more important than right and wrong, and more important than the individual and his or her liberty. This is reminiscent of the faulty worldview in the movie THE LAST SAMURAI, though others would say that the Japanese military hijacked the concept of bushido to serve their own, anti-democratic ends.

Overall, therefore, the pagan philosophy behind 47 RONIN is abhorrent, especially because it also supports the idea of being obligated to commit suicide. The occultism in the movie is mostly considered evil, so that aspect is not of great concern. That said, 47 RONIN contains some scary elements in association with the evil witch and the demonic cult that raised the Keanu Reeves character as a boy. The movie also contains some vague, undeveloped references to reincarnation and to the Buddhist culture prevalent in Japan for thousands of years.

Of course, the Christian, Western, and Biblical idea of self-sacrifice does not involve deliberate suicide, but risking your life or giving up your life to save others, especially those who are weaker or more vulnerable. Thus, the individual person under Christ is not obligated to a rigid hierarchy. He is a slave to no man, but a servant of Christ who finds honor in humbling himself and serving others, especially people in need.