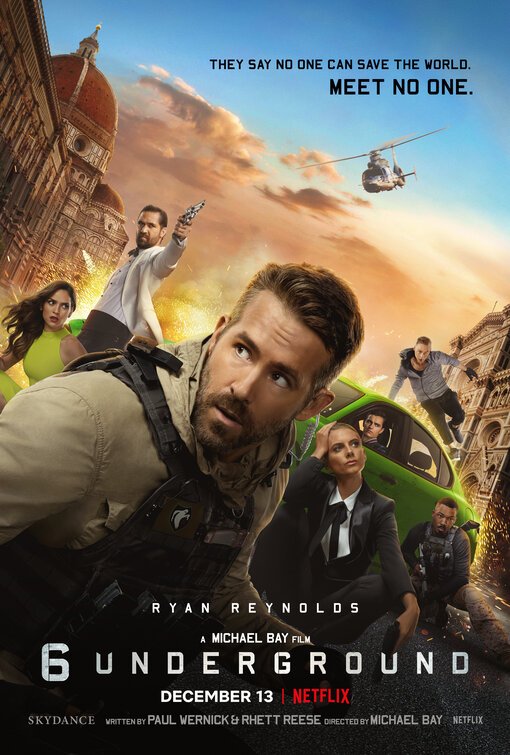 6 UNDERGROUND is an action-packed movie on Netflix about six people who fake their deaths in order to save the world from bad guys who are above the law. Led by a passionate billionaire tech mogul, the secret team of vigilantes takes on the evil military dictator of a fictional desert country. The dictator locks his younger brother, Murat, in a tower in Honk Kong. So, the group of vigilantes abducts Murat to save him from his older brother. The group still needs to get rid of the older brother so that Murat can take control of the government. The fight leads to a yacht, where the older brother has surrounded himself with soldiers and bodyguards.

6 UNDERGROUND is an entertaining action thriller with some good plot twists. However, the movie justifies vigilante violence and assassination. It also has lots of explicit, objectionable content. For example, it contains almost constant foul language and some explicit sexual content. Also, 6 UNDERGROUND is unnecessarily gruesome and bloody throughout, making some of the action scenes hard to watch. Media-wise viewers will find 6 UNDERGROUND unacceptable.

(PaPa, B, LLL, VVV, SS, AA, D, MM):
Dominant Worldview and Other Worldview Content/Elements:
Strong pagan worldview justifies vigilante violence and assassination against evil people preying on others
Foul Language:
At least 179 obscenities (including more than 100 “f” words) and 11 GD profanities, plus a woman spits in a man’s face, and a drunken man is shown urinating in a bathroom
Violence:
Lots of very strong and strong, graphic, bloody action violence includes several car chases, explosions, gun fights, spurts of blood throughout, a man’s eye comes out of his head, pedestrians are hit and shot, a group of civilians are killed in a gas attack, men are pushed off a building, multiple people are stabbed, a man’s teeth are blown out, a man questions taking his own life, and vigilantes dump an evil dictator among a group of his oppressed people, who tear him apart
Sex:
Partially depicted fornication in one scene, implied fornication in another scene, female prostitutes are hired for a hotel room, man says another man died in a masturbating accident, and a man crudely notes that Michelangelo’s David sculpture has a small male organ
Nudity:
No explicit nudity, but women are seen in underwear in one scene and a woman is shown in lingerie on a bed
Alcohol Use:
Man orders drink at bar and a drunken man drinking a bottle of alcohol is shown urinating in a bathroom
Smoking and/or Drug Use and Abuse:
Man smokes a cigar, but no drug references; and,
Miscellaneous Immorality:
Men steal jewelry, men abduct a man, men take revenge on a government, the heroes have no moral authority over them, and some stalking.

6 UNDERGROUND is an action-packed but ultraviolent television movie on Netflix about six people who fake their deaths in order to save the world from the bad guys who’re above the law. Led by a passionate billionaire tech mogul, the secret team of vigilantes take on the evil military dictator of a fictional country.

Ryan Reynolds plays Number One, a tech billionaire who fakes his own death to order assassinations on the evil leaders of the world that the government won’t combat. He recruits five specialists for his team of vigilantes, numbering them two through five. Within the movie’s first few minutes, Number Six dies and Number One replaces Six with a military veteran named Number Seven.

The group goes to Las Vegas and murders five principal generals of the fictional desert country of Turgistan. Despite the murders, the Turgistan government officials are still unaware of the group because they are presumably dead and have no digital footprint.

Meanwhile, in Turgistan, two brothers are vying for power. The evil brother, Rovach, locks his younger, pro-democracy brother, Murat, in a tower in Honk Kong. So, the group of vigilantes abducts Murat to save him from his older brother.

The group still needs to get rid of the older brother so that Murat can take control of the Turgistan government. The fight leads to a yacht, where the older brother has surrounded himself by soldiers and bodyguards.

6 UNDERGROUND is an action-packed movie and has a unique cast. Each character has a background story that makes them likeable. However, the movie is often confusing as it jumps between different timelines.

More importantly, almost every scene in 6 UNDERGROUND is violent and bloody, and some scenes are even stomach churning. Although the movie has the intent to show that the “good guy always wins,” the team of vigilantes is so reckless they end up killing innocent bystanders and pedestrians to take out one bad guy. The message seems hypocritical as the team acts out in violence the way that the evil dictator himself does. The movie also contains almost constant foul language and some explicit sexual references. Moreover, Ryan Reynolds’ character says, “F the government, they don’t help,” leaving impressionable viewers with the idea that it’s okay to embrace violence as a means to an end. 6 UNDERGROUND is entertaining with some good plot twists, but it has few redeemable qualities that make it worth watching.