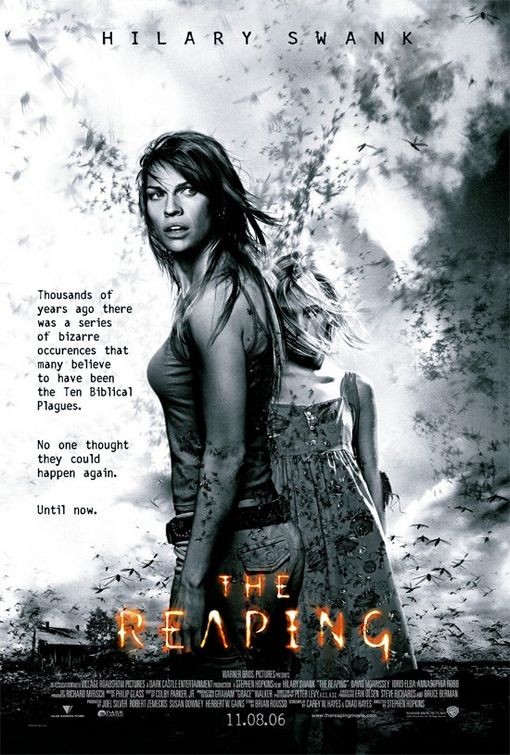 THE REAPING is a supernatural horror movie starring Hillary Swank as Katherine Winter. Katherine is a former Christian missionary who lost her faith after her husband and daughter were murdered in Africa. She now travels the world as an expert debunking alleged miracles. A science teacher in a bayou town in Louisiana calls on Katherine and her assistant, Ben, to see why the local swamp has turned red. Katherine discovers that the water has indeed turned to blood, just like the first of the 10 plagues against Egypt in Exodus. She must regain her faith in order to defeat a secret satanic cult connected to this plague and nine other plagues that occur. Though God's goodness prevails, the movie leaves things open for a sequel.

THE REAPING is a little too bizarre and scary for MOVIEGUIDE®'s high standards. Also, there seem to be a couple plot holes in the story. Although the movie has a strong Christian worldview where God shows up, performs miracles and punishes the wicked, it has some foul language and a sex scene. There are also many scary, disturbing and violent events, so MOVIEGUIDE® suggests extreme caution.

(CC, BB, FR, H, Ab, LL, VV, SS, N, A, M) Ultimately strong Christian worldview in a story with several plot twists involving a secret satanic cult practicing implied human sacrifice on children, with apparent, mysterious miracles but God is shown to be a powerful divine being with supernatural powers who clearly does miracles, (though the movie doesn't refer much to Jesus), some alleged miracles are validated, and, Christian leaders are seen in positive light, but movie sets viewers up at the end for a possible sequel where a satanic antichrist character may appear and other possible false or confused theology occurs in movie (such as giving demonic beings more power than they actually have according to the Bible), plus humanist anti-religion elements where heroine, a former ordained minister, expresses disbelief in God five years after her husband and daughter were murdered and travels the world to debunk apparent miracles but later she regains her Christian faith though she is too easily tricked at various times and Satanist speaks about his cult's members no longer believing in God as their Lord and says Satan is a better "lord"; 13 obscenities (including one "f" word), one strong profanity and two light profanities; strong, scary violence with some blood and disease and "jump-at-you" scenes includes water turned red with blood, flies and maggots suddenly infest meat on grill, swarms of locusts attack people and kill some, woman puts gun to her mouth and pulls the trigger off screen to commit suicide, blood pools at girl's feet, implied fatal stabbing, bones and bodies of children who have been sacrificed, woman discovers satanic sacrifice room, invisible satanic powers start a fire and lock door to burn a Christian victim to death, woman asked to kill allegedly satanic child, evil boy's skin suddenly dries out and he falls down dead, ugly boils on people's face and bodies kills them, powerful lightning strikes area and kills some people, etc.; depicted fornication scene but obscured and girl has menstrual blood running down her leg; upper male nudity in one scene; alcohol use; no smoking; and, lying, deceit, satanic cult defeated, and some possible miscellaneous theological confusion.

THE REAPING is a supernatural horror movie that makes viewers guess which way it’s headed. The movie finally shows that it’s clearly on the side of the biblical God, but not before some R-rated scary violence, foul language and an obscured, briefly depicted sex scene.

Hillary Swank stars as Katherine Winter, a former ordained Christian missionary who lost her faith when her husband and daughter were murdered by superstitious natives in the Sudan during a drought. Now, Katherine is a professor at Louisiana State University who travels around the world debunking alleged miracles.

After debunking an alleged Christian miracle in Chile, Katherine and her assistant Ben are called to the bayou in Louisiana, where the town named Haven has seen the local swamp turn red. Helped by the local science teacher, Doug, Katherine and Ben discover that the swamp really has been turned to blood, just like the 10 plagues that affected Egypt when God told Pharaoh to “Let my people go!” The other 10 plagues also start affecting the town. The townspeople believe that a mysterious blond girl from an ostracized family is a tool of Satan and that she is causing the miracles to mimic and mock God. Katherine learns that a satanic cult may be somehow involved with this family. That’s when the twists begin.

In the end, the truth is revealed, Katherine regains her faith, and God performs a couple powerful miracles, punishes some of the wicked and protects some of the righteous. Thus, the movie’s Christian worldview makes it clear that we should look to and worship only God. The movie’s final scene leaves things open, however, for a sequel with a satanic child who just might be the antichrist.

THE REAPING is a little too bizarre and scary for MOVIEGUIDE®’s high standards. Also, there seem to be a couple plot holes in the overall story. Furthermore, there are scenes where viewers don’t know if the heroine is seeing something that’s real, a vision, a supernatural event, a dream or nightmare, or a flashback from the past. Thus, it may be hard for many viewers, especially viewers who don’t buy into the possibility of such bizarre, mysterious and confusing visions, supernatural events, dreams, flashbacks, etc., to suspend their disbelief long enough to accept the movie’s emotional pull and storyline. This may be especially true regarding the movie’s plot twists and its more extravagant supernatural events.

Despite the positive Christian aspects in second half, THE REAPING has some foul language and a sex scene. There are also many scary, disturbing and violent events. Finally, although the movie eventually shows that God is more powerful than Satan, this is an open question in earlier parts of the movie. Not only that, but in one scene, it’s clear that invisible supernatural satanic powers entrap a good Christian character in a fire in a locked room to burn the character to death. This gives the demonic more power than they really have, biblically speaking. Also, the movie buys into the notion of a satanic child or an antichrist intending to do great evil in a possible End Times scenario. Such a notion is a disputed theological point that many Christians believe but that does not match what the Bible actually seems to say about Satan and the End Times.