A HOLOGRAM FOR THE KING 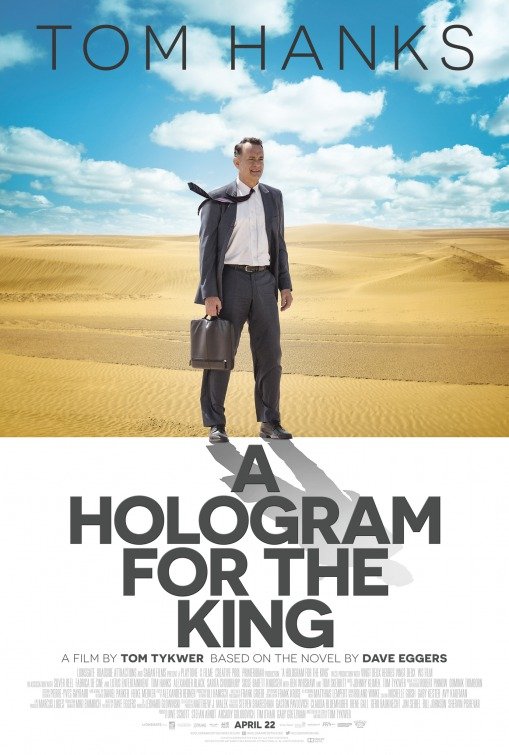 A HOLOGRAM FOR THE KING stars Tom Hanks as Alan Clay, a divorced American businessman trying to close the deal of a lifetime in Saud Arabia. Alan travels to Jeddah in Saudi Arabia to close what he hopes will be the deal of a lifetime with the King and his minions. However, Alan becomes baffled by local customs and bureaucratic red tape while trying to fight jetlag and a bizarre cyst on his back. Alan eventually finds his footing with the help of a wise-cracking taxi driver and a beautiful Saudi doctor who’s also divorced.

A HOLOGRAM FOR THE KING is nicely written and played, with some really funny cross-cultural moments and misunderstandings. The fish-out-of-water experience of the movie’s protagonist is often hilarious. However, the movie has a Romantic worldview where Alan and the Saudi doctor flaunt social convention and have a premarital affair. There’s also a lot of strong foul language. Finally, though it satirizes Saudi Arabia’s oppressive political system, it kind of lets Islam off the hook. So, media-wise viewers ultimately will find A HOLOGRAM FOR THE KING unacceptable viewing.

(RoRo, FRFR, B, LL, V, SS, NN, AA, DD, M) Strong Romantic worldview in a story set in Saudi Arabia about an American businessman that has a positive view of parts of Islam, despite some criticisms of Saudi Arabia’s oppressive, undemocratic political system and its oppression of women, plus some positive moral elements of kindness and helping others; 13 obscenities (including four “f” words), four strong profanities and two light profanities; it’s implied man takes a steak knife to a cyst on his back, and there’s some blood afterwards, and an operation, man stumbles upon an illegal boxing match in a building being constructed, brief mention of public executions; partially depicted fornication scene includes divorced man kisses half-naked divorced woman under water, man visits wild party where it looks like an orgy of some kind is being developed, though nothing salacious is shown other than drunken party behavior, unmarried woman in bra tries to convince divorced man to fornicate while they are passionately kissing, but he declines and leaves, and man mentions a husband who’s jealous because of man’s friendship with husband’s wife though nothing has happened between them; shots of upper female nudity in beach scene and bedroom scene, and some shots of upper male nudity; alcohol use and a couple scenes of drunkenness; smoking and an image of two men using cocaine at a wild party at a Dutch embassy in Saudi Arabia; and, unmarried couple sneaks, and a Jungian image on a door of the moon and the sun implies a Jungian psychoanalytic meaning behind the movie’s primary male/female relationship that can be placed into a biblical perspective but isn’t here.

A HOLOGRAM FOR THE KING stars Tom Hanks as a divorced American businessman who falls for a divorced Muslim woman while trying to navigate a business deal involving computer technology with the King of Saudi Arabia and his minions. A HOLOGRAM FOR THE KING is nicely written and played, with some really funny cross-cultural moments and misunderstandings, but it downplays the evils of Islam and shows the businessman having an illicit affair with the Saudi woman, who happens to be a doctor.

The movie opens with a funny dream sequence where Tom Hanks’ character, Alan Clay, uses the Talking Heads song “Once in a Lifetime” to describe how he lost his beautiful job, beautiful house, beautiful car, and beautiful wife. Alan wakes up to a Muslim imam leading a planeload of Muslims in a chant. Alan is traveling to Jeddah in Saudi Arabia to close what he hopes will be the deal of a lifetime with the Kingdom of Saudi Arabia.

However, Alan soon becomes baffled by local Saudi customs and bureaucratic red tape while trying to fight a huge case of jetlag and a bizarre cyst growing on his back. Not to worry, though. Alan eventually finds his footing with the help of a wise-cracking taxi driver, Yousef, and a beautiful Saudi doctor, Zahra. The doctor, who’s also divorced, helps Alan with his medical problems, and the two find themselves falling in love. The question is, will Alan close the deal so he can pay for his daughter’s college tuition?

The first part of A HOLOGRAM FOR THE KING plays like a fish out of water comedy. As such, it’s very funny. The taxi driver loves to joke around. There are some provocative jokes about Saudi Arabia’s ban on alcohol and penchant for public executions. Also, the taxi driver and Alan find a goofy rapport through popular American music, which the taxi driver loves. The movie’s second half also turns into a romance, as Alan gets to know the beautiful Saudi doctor, who has found some ways around her country’s Islamic laws oppressing women.

In addition to its funny bits, A HOLOGRAM FOR THE KING has some pungent criticisms of globalism. During the course of the story, it’s revealed Alan used to work for the once-mighty Schwinn Bicycle Company. As such, he mistakenly steered the company toward bankruptcy after outsourcing hundreds of jobs to China, which eventually stole the company’s intellectual property to make its own bikes. Alan’s father has never forgiven his son for helping to betray the company, and, as it turns out, America’s manufacturing base.

Despite all this, however, A HOLOGRAM FOR THE KING has a strong Romantic worldview. Thus, not only is the government in Saudi Arabia corrupt and oppressive, so is the global economy. In the end, Alan and the Saudi doctor decide to flaunt social convention and begin an extra-marital affair. As a result, the middle of the movie contains a sex scene between Alan and the doctor. The scene begins on an isolated beach with a swim in the ocean where she takes off her top and hides under the water so that, if anyone sees them, they will think it’s just two men enjoying a swim together. Eventually, they take their swim into the bedroom of her fancy, isolated beach house. The new relationship with Zahra reinvigorates Alan and helps him solve the plot problem.

A HOLOGRAM FOR THE KING also has some strong foul language, including a couple “f” words and several strong profanities. Furthermore, in the end, it seems like the filmmakers are soft-pedaling the evils of Islam and the part Islam plays in Saudi Arabia’s political oppression. In one sequence set during a long weekend, Alan visits the mountain village where Yousef grew up. By this time, Yousef has told Alan that he wants to turn Saudi Arabia into a democracy. However, in Yousef’s village, Alan watches calmly as Yousef and a small group of his favorite relatives and friends pray to Mecca.

In reality, of course, the political oppression in Muslim countries like Saudi Arabia isn’t due simply to a bad political system or corrupt government, but has its basis in the evils of Islam. Islam is intellectually, politically and morally bankrupt. Not only does it have an unsound view of God, but also its politics is anti-capitalistic and totalitarian, and its holy books tell Muslims that God wants them to lie to and murder Non-Muslims. Islam also has a low view of women that seems impossible to redeem without discarding the whole religion. This isn’t true of the Bible, which actually has a high view of women.

Ultimately, therefore, the portrayal of Islam in this movie is not as harsh as it should have been. MOVIEGUIDE® realizes that A HOLOGRAM FOR THE KING is meant to be more of a light comedy than a heavy social drama. However, a person watching this movie might come away saying, “You know, Muslims aren’t all that bad,” which is almost like saying, “You know, Hitler wasn’t such a bad guy after all” after watching the Nazi propaganda movie TRIUMPH OF THE WILL. This actually happened to one viewer at a screening of the Nazi documentary at an undergraduate college in Ohio in the 1970s, according to one professor there.