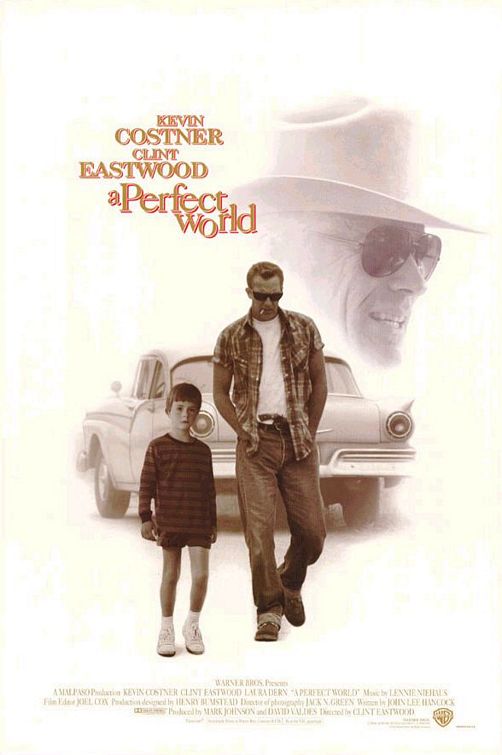 Audiences expecting an action-packed/good-guy-wins/lawman-gets-his-man/adventure-drama from this Costner & Eastwood pairing will be greatly disappointed with the depressing and morally imperfect film A PERFECT WORLD. Kevin Costner plays escaped convict Butch Haynes, and Clint Eastwood, as Texas Ranger Red Garnett, is assigned to bring him in. The story is depressing and morally empty; it mocks religion and teaches children how to steal and kill.

Audiences expecting an action-packed/lawman-gets-his-man/adventure from the first Costner & Eastwood pairing will be greatly disappointed with the depressing and morally imperfect film A PERFECT WORLD. Kevin Costner plays escaped convict Butch Haynes, and Clint Eastwood, as Texas Ranger Red Garnett, is assigned to bring him in. Laura Dern is a fairly useless rookie criminologist along for the ride. Butch and a convict partner break out of Huntsville prison in 1963 Texas, steal a car and take a seven-year-old boy hostage. The film goes downhill from here, taking a psychological look at relationships and attempting to show similarities between Butch and his young hostage–both suffering from the ill-effects of life without a father. However, the film misses badly in its attempt to draw sympathy for Butch. He is a criminal, and his influence on Phillip is despicable as he teaches him how to steal, kill and rebel against his religious training. A father-son relationship? I think not!

Eastwood contributes very little to the film while on screen. His character is not particularly interesting and his performance is dull. His direction, however, is adequate. The story itself is depressing and morally empty, and that is exactly how viewers will feel after watching this film. The film quality is good, but in A PERFECT WORLD, good cinematography helps very little.