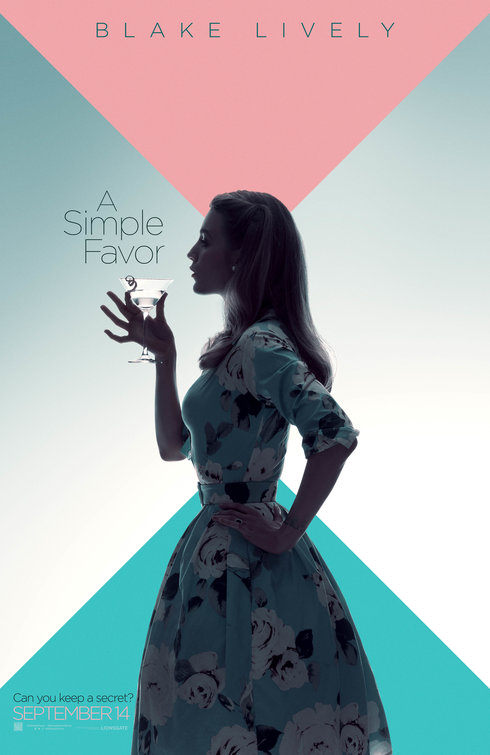 A SIMPLE FAVOR can’t decide whether to be a comedy or a dark suspenseful thriller. Stephanie, a seemingly naïve, innocent widowed mother, befriends Emily, a wealthy mother and fashion designer with a handsome husband and son. Stephanie has a “mommy vlog,” where she gives tips on being a good mom and homemaker. After asking Stephanie to pick up her son from school, Emily suddenly disappears mysteriously. Meanwhile, Emily’s husband is overseas with his sick mother. So, Stephanie talks with her followers about her efforts to find Emily. Emily’s body appears to turn up in a nearby river, and Stephanie becomes involved with Emily’s husband. This leads to an ever-escalating series of plot twists.

A SIMPLE FAVOR shifts tone too much between comedy and suspenseful thriller. The performances are sometimes too campy. Also, the movie has too much happen too quickly, making many of its plot twists seem absurd. A SIMPLE FAVOR has a strong Romantic worldview that paints a negative portrait of American suburban life. It also has excessive foul language, some explicit nudity, extramarital hanky-panky, and unlikeable characters.

(RoRo, APAP, Fe, Ho, C, LLL, VV, SS, NNN, AA, DD, MM):
Dominant Worldview and Other Worldview Content/Elements:
Strong Romantic worldview takes a negative view of American suburban life, with a light feminist subtext, plus two women start to kiss and there’s a brief, serious Christian funeral scene;
Foul Language:
At least 61 obscenities (mostly “f” words) and eight mostly strong profanities;
Violence:
Strong violence includes pulverizing car wreck seen three times as flashbacks, but no bodies are shown, a corpse is pulled out of a lake, dead and discolored but not too graphic, a character is shot twice (one time was faked), two teenage girls commit arson on their childhood home and watch it burn, but no one is hurt, a woman throws a wrench up in the air, and it is implied that she lets it land on her face, the scene cuts away to reveal her with a black eye as she accuses her husband of abusing her, and a character drowns another character;
Sex:
Two partially depicted sex scenes where the males are shirtless, and the woman is seen in her underwear (one scene shows woman fornicating with her attractive half-brother whom she never knew about until she met him at their father’s memorial service, and she’s overcome by grief mixed with lust, and the other scene shows the woman with the husband of her supposedly dead best friend), two women start to kiss passionately for a moment before stopping, a woman tells another woman she and her husband had a threesome with another woman, but this is later revealed to be a lie, and a married couple is also glimpsed having sexual relations while standing up in an airplane bathroom;
Nudity:
Graphic closeups of an extremely graphic painting of one of the two main women reclining fully nude with the genital area being the most prominent focus of the painting, black and white photos show same woman topless, and a woman is seen running nude from behind through some woods before jumping off a dock into water;
Alcohol Use:
One main woman is constantly drinking and seems to be a bit of a lush;
Smoking and/or Drug Use and Abuse:
No smoking but a cop mentions that needle marks were found all over one woman’s arms and toes, as she was a heroin addict; and,
Miscellaneous Immorality:
Lying and double-crossing abounds as it’s revealed there’s a scheme to falsely and illegally cash in on an insurance policy.

A SIMPLE FAVOR is a comic thriller about a seemingly naïve and innocent, young widowed mother who befriends a wealthy woman just before the other woman disappears, leading the widow to become emboldened as she strives to solve what happened. A SIMPLE FAVOR can’t decide whether to be a comedy or a thriller and has a strong Romantic worldview that paints a negative portrait of American suburban life, with excessive foul language, explicit nudity, extramarital hanky-panky, and ultimately unlikeable characters.

The movie opens on Stephanie (Anna Kendrick), a perky and seemingly naïve and innocent young widowed mother who’s speaking on her “mommy vlog,” where she’s giving gives tips on being a good mom and homemaker. The twist is that she talks about how her best friend Emily (Blake Lively) has disappeared and she is going to discuss her efforts to find her with her followers.

The story then jumps back to how their friendship developed, since Stephanie is a seemingly complete opposite from Emily, who’s ice-cold to everyone else and is incredibly rude to her boss and her husband, Sean (Henry Golding). Emily has a beautiful designer home, yet speaks with disdain about it. She starts repeatedly asking Stephanie, who’s living off the life insurance payoff from her own husband’s accidental death in a car crash, to do “a simple favor” watching her young son on increasingly frequent occasions.

One night, Emily completely disappears, leaving Stephanie watching her son for days since Emily’s husband Sean is visiting his hospitalized mother overseas. As Stephanie starts to realize she’s being taken used, she starts to toughen up and investigate what’s really happening with Emily and her life, until Emily is found dead in a river.

Sean soon makes a grief-stricken romantic move on Stephanie and the two begin an affair that leads to her living with him. Soon, however, she starts to notice signs that Emily might actually be alive. This leads to an ever-escalating series of plot twists.

This may all make A SIMPLE FAVOR sound like an intriguing Hitchcockian thriller, and for a while it works. However, while director Paul Feig (BRIDESMAIDS, THE HEAT, SPY) these days seems to be the king of successful female-starring comedies, his attempt here to switch into a different genre is hampered by his refusal to play it straight and serious enough.

Also, the movie has too much happen too quickly, making many of its plot twists absurd as the characters make major life decisions in ridiculously quick fashion. It seems that Feig and Screenwriter Jessica Sharzer are trying to have it both ways as both a comedy and a thriller, leaving the laughs not strong enough, while weakening the surprises.

The campy tone of the lead female performances also undercuts the dramatic elements of the movie, making it nearly impossible to take these people seriously enough to care what happens to them. Frankly, CRAZY RICH ASIANS breakout star Henry Golding does a better job with his all-serious role of Sean than leading ladies Kendrick and Lively do with their comical performances.

Feig shoots most of the happenings with some discretion, as a sexual tryst in an airplane bathroom between a fully clothed Emily and Sean is seen only in a split-second, and two sex scenes involving Stephanie feature her male partners with their shirts off, but no other nudity. The violence is either implied off-screen or played comically in a brief burst.

The movie’s biggest moral offenses come from a large, graphic painting of Emily nude, which focuses on her pubic hair in the foreground and is seen repeatedly in the movie. A visit by Stephanie to the artist, who painted her, reveals several topless photos of Emily as well. Even more shocking than that is a story where Stephanie admits she had sex with a half-brother she never knew she had, after meeting him at their father’s memorial service. This leads Emily to call her an obscene name several times. Finally, A SIMPLE FAVOR has a strong Romantic worldview with a negative depiction of American suburban life and excessive foul language.

Overall, A SIMPLE FAVOR has the simple but fatal flaw of not taking itself seriously enough in the beginning for viewers to care what happens to its unlikeable characters.