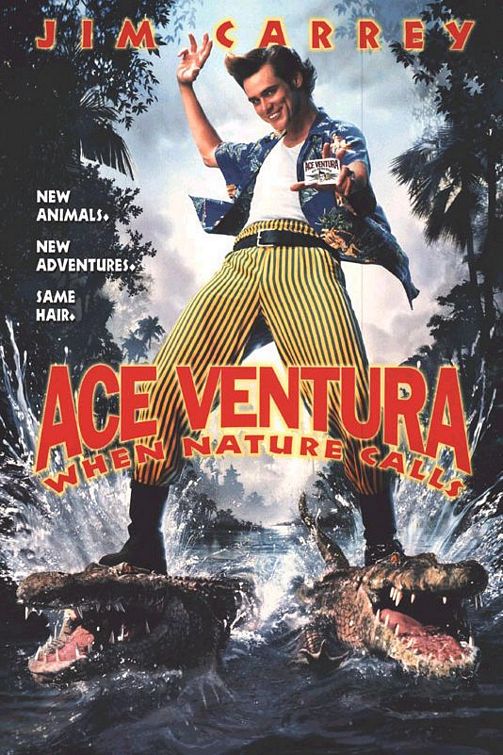 There is no character on the screen today quite like Jim Carrey's ACE VENTURA. WHEN NATURE CALLS, he heads for Africa. This sequel to the 1994 hit ACE VENTURA: PET DETECTIVE serves up a few laughs and a lot of gross behavior. In this outing, Ace is a practicing Buddhist who must rescue an albino bat in Africa. Expect the usual over-the-top antics and obscene physical comedy.

There is no character on the screen today quite like Jim Carrey’s ACE VENTURA, and WHEN NATURE CALLS, he heads for Africa. This sequel to the 1994 hit ACE VENTURA: PET DETECTIVE serves up a few laughs and a lot of gross behavior. This movie starts with Ace climbing a mountain to rescue a raccoon on a high cliff. When Ace can’t rescue the little furry fellow, Ace joins an ashram in Tibet. There, an Englishman named Greenwall offers Ace thousands of dollars if he will go to Africa and find Shikaka, a lost rare white bat. The bat is needed for a tribal wedding ceremony. Ace accepts the challenge and is met with a slew of comic difficulties. Ace recovers the bat, saves the day and the wedding goes off with one small Ace-caused hitch.

Carrey doesn’t avoid the gross and obscene in his repertoire. Most people will enjoy some of the comedy, be bored with other parts and be repulsed by much of it. To its credit, this movie doesn’t include the very offensive element of cross dressing and transexualism that the first movie had, but it does have Ace practicing Buddhism. It also includes a lot of gross scatological humor that is offensive. If you want crazy antics without obscenity, rent a Jerry Lewis movie for your children.