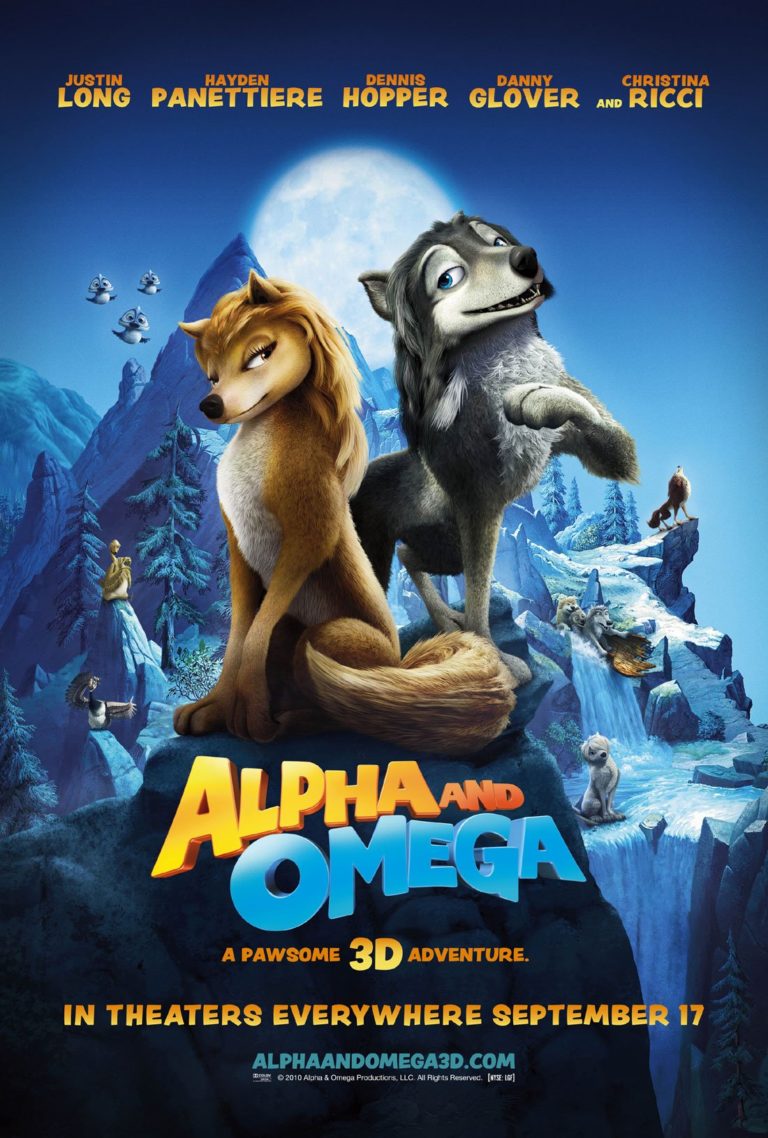 ALPHA AND OMEGA, in “pawsome” 3D, is an animated children’s romance. Kate is an alpha wolf. Her best friend, Humphrey, is an omega wolf. Two wolf packs are fighting over the valley for the remaining caribou food source. To bring peace, Kate’s father, the head of her pack, has made a deal with the leader of the other pack to marry Kate to their alpha wolf. Wildlife officials capture Kate and Humphrey, however, and take them to Idaho to re-populate the wolf population. Now, Kate and Humphrey have to get back to Jasper, Canada before the two wolfpacks go to war. A monkey wrench is thrown into that plan when romance begins to blossom between Kate and Humphrey.

ALPHA AND OMEGA has a lot going for it. The ending is very well paced and full of jeopardy. There’s even a slight hint of a resurrection after a caribou charge. That said, the script seems to have trouble setting up the romance. For instance, it tries to avoid any salacious content while also trying to explain the mating habits of wolves. ALPHA AND OMEGA also has some bathroom humor and dangerous situations.

(RoRo, C, B, L, V, M) Strong Romantic worldview focused on a romance between an alpha wolf and an omega wolf with some light redemptive content plus some moral elements include characters work together to overcome obstacles and movie makes fun of vegetarians; light vulgar references to rear ends, spitting, going to the bathroom, and some other light scatological items; light action violence, sometimes scary for children, however, with several caribou stampedes, several wolf fights, several high falls off mountains and cliffs, and several life threatening situations; references to wolves coupling at the midnight howl and wolves sniffing each other and courting each other; no nudity but one scene where female wolf accidentally hides in a RV trailer and gets a bra on her; no drinking; no smoking; and, territorial war between wolves, movie makes fun of vegetarian wolves, and responsibility versus follow your heart.

ALPHA AND OMEGA, in “pawsome” 3D, is a children’s animated romance from Richard Rich, former Disney animator, who did THE SWAN PRINCESS, THE KING AND I and several other animated movies after leaving Disney. The story takes awhile to get going, but the end is compelling and heartrending.

Kate is an alpha wolf whose best friend Humphrey is an omega wolf. The law of the wolf pack is that alpha wolves cannot mate with omega wolves. An alpha wolf is trained to lead the hunt and head the pack. An omega wolf is the joker, always ready to crack jokes.

Two wolf packs are fighting over the valley for the remaining caribou food source. Kate’s father, Winston, the head of her pack, has made a deal with Tony, the leader of the other pack, to marry Kate to their young alpha wolf, Garth, so they can merge the packs and stop fighting over the caribou. Just when the deal is about to be done, Kate and Humphrey are captured by wildlife officials and taken from Canada to Idaho to re-populate the wolf population there. Now, Kate has to get back to Jasper, Canada before the two wolfpacks go to war against each other.

On the way back to Jasper, romance blossoms between Kate and Humphrey. Meanwhile, Kate’s sister, who is an omega, is trying to distract the hunk, Garth, so the two wolfpacks won’t go to war. Of course, romance develops between them too.

At first, Kate accepts her responsibility to marry Garth, but the trip back to Canada gives her a new appreciation for Humphrey. So, the question is, will responsibility be replaced by romance?

ALPHA AND OMEGA has a lot going for it. The ending is very well paced and full of jeopardy. There’s a slight hint of a resurrection after a caribou charge. Vegetarians are the brunt of jokes, and there’s a prominently featured libertarian bumper sticker on the camper Kate and Humphrey hitch a ride to help them get back to Canada.

That said, the script seems to have trouble setting up the romance. There’s an attempt to avoid any salacious content, but there’s also an attempt to explain the mating habits of wolves.

At the screening, a little boy said, “If Kate is an alpha wolf, how can her sister be an omega wolf?” His comment shows the movie had some slow spots and the plot was not totally convincing to a young child.

Some of ALPHA AND OMEGA seems a little silly and some of it a little slow. There are also a couple scatological jokes about going to the bathroom, and Kate getting into a woman’s suitcase and emerging in a bra. There are lots of pratfalls, dangerous situations, wolf fights, and other animated adventures.

In the final analysis, however, ALPHA AND OMEGA is a fun movie. While the message is not bad, a better message would have been if Kate had actually fulfilled her responsibility instead of following her heart. Even so, ALPHA AND OMEGA is full of worthwhile values and hints at deeper faith.