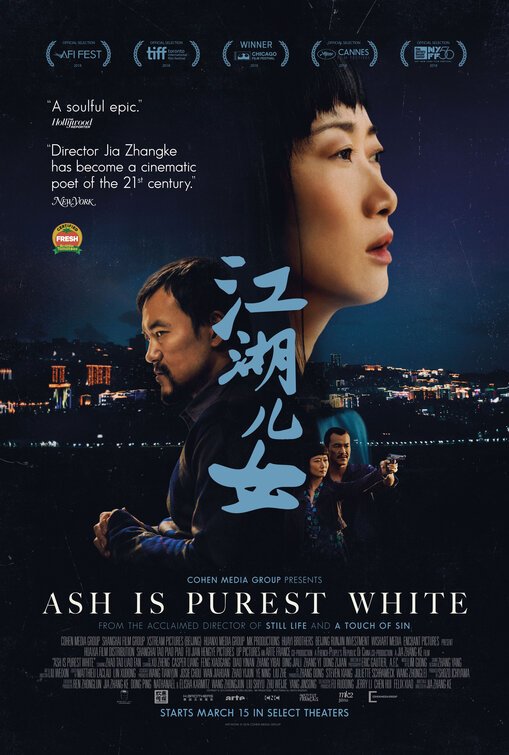 ASH IS PUREST WHITE is a Chinese crime drama. A woman named Qiao (“Chow”) lives a life of luxury with her boyfriend Bin, doing shady deals with powerful figures. When Bin is badly beaten during a fight, Qiao uses his illegal firearm to break up the fight. After serving five years in prison for Bin, she’s released, only to find Bin left her for another woman. With no money or possessions, Qiao must start a new life, armed only with her will to survive.

Many scenes in ASH IS PUREST WHITE are driven by well-acted performances set amid the picturesque hills of several cities in China. As such, the movie lets viewers explore Chinese culture in an interesting way. Also, many moviegoers will enjoy watching a strong female lead cope with loss and forgiveness with elegance and grace. That said, the ending lacks a satisfying resolution to Qiao and Bin’s relationship. Also, the movie’s mixed worldview implicitly promotes the false Eastern theology of karma. Finally, ASH IS PUREST WHITE contains some strong obscenities, violence and two scenes of praying to a Buddha statue.

(PaPa, FRFR, BB, C, L, VV, S, AA, D, MMM)
Dominant Worldview and Other Worldview Content/Elements:
Strong mixed pagan worldview with negative and positive elements includes a main theme of karma (a false Eastern theology) and some characters say life is “kill or be killed,” combined with some morally uplifting, light redemptive elements that extol compassion, kindness, love, and forgiveness and female lead’s father says, “Light will triumph over darkness,” plus themes of getting revenge and justice for those who’ve been wronged and other false theology includes worshipping a false god that includes praying to a Buddhist statue
Foul Language:
Eight strong obscenities and no profanities
Violence:
Strong violence includes two scenes of people being beaten by a gang, someone striking someone’s leg with a weapon, people watch a violent movie on television, a woman shoves another woman, woman fights off a gang with a water bottle, and woman breaking a teapot over someone’s head
Sex:
One scene of a man soliciting a woman for sexual relations, implied cohabitation, and two people kiss
Nudity:
No nudity
Alcohol Use:
High level of alcohol including several scenes of drunkenness (one scene is rebuked, the others are not)
Smoking and/or Drug Use and Abuse:
Lots of smoking but no drugs;
Miscellaneous Immorality:
Very strong miscellaneous immorality, such as lying, stealing, revenge, greed, classism, moral relativism, gambling, hypocrisy, slander, bad role models, and dysfunctional family.

ASH IS PUREST WHITE is a Chinese crime drama. It stars Ziao Tao as Qiao (“Chow”), a strong woman who lives a life of luxury with her boyfriend, Bin. When her father is laid off, she must find extra means to provide for him.

Bin makes a shady deal with Brother Eryong, a rich entrepreneur and loan shark who also builds villas in Datong City (a city in China). The next morning, however, Brother Eryong has been stabbed to death by some youth. After detectives come up with nothing, it is Bin and Qiao’s job to find the culprits. On their way to Hohot, a gang swarms their car. Bin and the driver are both beaten, and Qiao, armed with Bin’s illegal gun, shoots it in the air to stop the fighting. Five years later, she’s released from prison for having an illegal firearm.

Qiao travels to Three Gorges where she searches for Bin. Discovering he has left her for another woman, she tries to find her way home. She toys with the idea of starting a new life. However, just as she begins to live life without Bin, she’s quickly beckoned to his side him after Bin suffers an alcohol-induced stroke. The roles are now reversed as Qiao, once dependent on Bin and his money, is now taking care of him as he learns to walk again while being confined to a wheelchair.

One of the movie’s best parts is its cinematography. Whether the camera spans the view of Badong Wharf in Three Gorges or walking up a hill to view the lush green hills of Datong City, viewers will be transported into Chinese culture. Qiao often wears brightly colored authentic Chinese fashions, sometimes offsetting some of this crime drama’s darker scenes. Both the cinematography and the cast’s professional performances make ASH IS PUREST WHITE an extremely artistic movie. Despite this, the movie has some mixed results.

Christians will recognize some themes in ASH IS PUREST WHITE. In the movie, characters often say, “it is killed or be killed,” or take action to exact vengeance for some wrongdoing. In one scene, however, Qiao’s father tells her, “Light will triumph over darkness.” This idea of seeking revenge or justice for evil pervades most of the movie.

However, viewers looking for an uplifting or hope-filled resolution to the plot won’t find it here. Abandonment is one of the movie’s main concepts. For example, Qiao must struggle to survive on her own while Bin continues to use her again and again. The audience will cheer Qiao on as she figures out life and finds some newly found independence on her own. Qiao is also extremely loving, as she continues to forgive Bin and care for him in his greatest moments of weakness.

That said, the movie’s ending lacks a satisfying resolution to Qiao and Bin’s story. Also, the movie ultimately teaches the Eastern idea of karma, that all our actions, good and bad, come back to us. Thus, Bin has a stroke and ends up in wheelchair because of the bad things he’s done. Of course, in Buddhism and Hinduism, karma is also linked to the false notion of reincarnation.

Ultimately, ASH IS PUREST WHITE has a mixed worldview. It goes from teaching karma and showing people worshipping and praying to Buddha to including morally uplifting, light redemptive elements that promote compassion, kindness, love, forgiveness, and the idea that light will triumph over darkness. The movie also contains several strong obscenities and several strong scenes of violence, including scenes of people watching a violent movie on television.

In light of all this, ASH IS PUREST WHITE probably will turn off media-wise viewers.