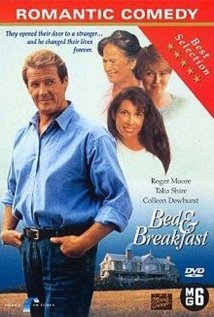 In BED AND BREAKFAST, a man pretending to have amnesia becomes a handyman for three women (grandmother, daughter-in-law and granddaughter). With intense sexual overtones, including cohabitation, sneaking off with one's boyfriend and implied fornication with multiple partners, BED AND BREAKFAST is anything but a light-hearted family comedy.

The film BED AND BREAKFAST focuses on three women who manage a large New England seaside home. Ruth is the crusty, profane grandmother who owns the house. She is in conflict with daughter-in-law Claire about Claire’s 16-year-old daughter who wants to run away to New York with her boyfriend to pursue a musical career. Into this unstable triangle enters a mysterious stranger (played by Roger Moore), who pretends to have amnesia. Naming him Adam, the women hire him as a handyman in exchange for room and board. As might be expected, Adam upsets the unstable equilibrium in the house, arousing various conflicts.

All of this could have been a pleasant diversion, except that the “solutions” focus on reckless sex. With newly resurrected libido, Grandma Ruth attacks a local widower and moves in with him. Mama Claire succumbs to Adams’ charms, indulging in fornication to relive her hang-ups. In turn, Claire smilingly sends Cassie and boyfriend to New York. As it turns out, Adam is a world-class scam artist, wooing women for their money around the globe. Overall, audiences deserve better than the downbeat behavior presented in BED AND BREAKFAST.