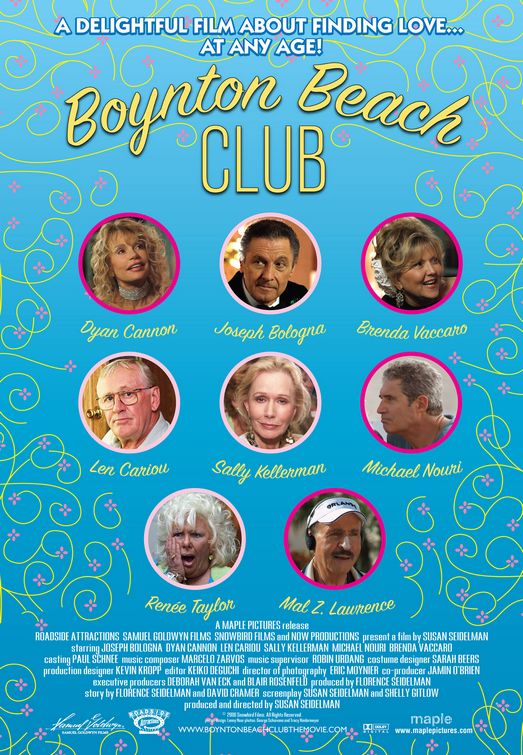 BOYNTON BEACH CLUB is a sex comedy for the geriatric set starring Sally Kellerman, Joe Bologna, Brenda Vaccaro, Dyan Cannon, and Len Cariou. The movie opens with Marilyn devastated about the sudden death of her husband. She joins the Boynton Beach Bereavement Club. There, the women outnumber the men eight to one. Jack just lost his own wife and gets involved with Sandy, who comes on very strong, eventually exposing herself and sleeping with him. Harry starts an online romance with a woman who turns out to be a prostitute with a closet full of sex toys. Lois falls for real estate developer Donald who turns out to be an exterminator.

After the third or fourth sex joke, BOYNTON BEACH CLUB becomes tedious and pathetic. There are a few good insights and funny moments. The actors, who once upon a time had a good career in Hollywood, perform well. The music is serviceable. The movie is preoccupied by sex, however, with elderly people looking for love in all the wrong places. The hints of religion don't seem to satisfy anyone. This is the aging 60s generation of pre-baby boomers heading straight to Hell.

(PaPaPa, B, C, LL, V, SS, NN, A, DD, MM) Very strong pagan worldview featuring old codgers looking for love in all the wrong ways with some nods to a Jewish funeral and some references to Christmas; nine obscenities and five profanities; man gets run over by car, woman gets slapped, and older woman falls down on roller skates; lots of sexual discussions, sex toys, apron flips open to reveal giant phallic toy, man goes to prostitute, older people grope each other, older couple goes to bed on second date, man buys erectile pills at pharmacy, pharmacist yells to man where the condoms are, several women watch porno movie and comment on women's private parts talking about their own shapes and sizes, woman starts to perform oral sex but guy refuses, etc.; upper female nudity, rear nudity and phallic toys; drinking; smoking and drug use, including teen smokes marijuana and older person doesn't condemn it; and, lying, hiding identities, and fabricating personal history.

BOYNTON BEACH CLUB is a sex comedy for the geriatric set. Although the movie has a few funny moments, those moments are overshadowed by disgusting references to private parts and elderly, out-of-shape, flabby people looking for love in all the wrong places. This is the aging 60s generation of pre-baby boomers heading straight to Hell.

The movie opens with Marilyn (Brenda Vaccaro) and Marty arguing briefly as Marty goes out to take the trash. On his walk, another geriatric member of this retirement community backs over him while talking on her cell phone.

Marilyn is devastated and goes to the Boynton Beach Bereavement Club. There, the women outnumber the men eight to one. Jack (Len Cariou) has just lost his wife and he gets involved with Sandy, played by Sally Kellerman, who comes on to him very strong, eventually exposing herself and going to bed with him. Harry (Joe Bologna) starts an online romance with a woman who turns out to be a prostitute with a closet full of sex toys. Lois, played by Dyan Cannon, falls for real estate developer Donald (Michael Nouri), who turns out to be an exterminator.

After the third or fourth sex joke, BOYNTON BEACH CLUB became tedious and pathetic. Not only do most teenagers not like watching women being exploited sexually, according to a recent survey, but watching 60- and 70-year-old women being exploited sexually is even more repulsive. That said, there are a few good insights in the movie. The actors, who once upon a time had a good career in Hollywood, perform well. The music is serviceable. But, the fatal flaw in the movie is that the movie is preoccupied with sex. The slight hints of religion don’t seem to satisfy anyone. It is sad to realize that these once vibrant people are still cruising for a bruising in their love life and are headed to perdition.