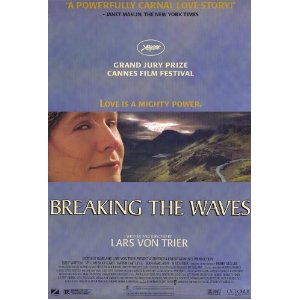 BREAKING THE WAVES is an obscure Danish movie about a woman from a strict religious community who finds marital love. When her man's life becomes threatened, he encourages her to become sexually promiscuous, resulting in disaster when her community finds out. Though morally strict, this movie actually endorses a mixture of paganism and Christianity. It also has extensive sexual situations and nudity.

Set in the 1970’s, BREAKING THE WAVES is a heart-rendering, compelling story of a girl of phenomenal sensibility living in a religious community on Scotland’s rugged Atlantic coast. Bess experiences a unique ability to have God speak through her through a low voice. When Bess briefly leaves her close-knit religious community, she falls in love with a off-shore rigger and returns to tell her family she is to be married. The community quickly disapproves of her betrothal, and her family tries to prevent the marriage. After Bess marries, her husband has a terrible accident. He encourages her to partake in adulterous sex stating that it will help improve their relationship.

The movie’s elements of spirituality are the driving theme. The way Christians are portrayed as legalistic and cold-hearted would leave any true believer wincing at the movie. However, the director was clear to show the isolation of this community and that they would not even have to be religious to show the same type of contempt for Bess. Even though her doctrine was not sound, she left the audience sensing she was actually communicating with God. Even though the ending does not make biblical sense, there is an element of grace that is revealed. Furthermore, graphic sex and nudity will offend the moral moviegoer.