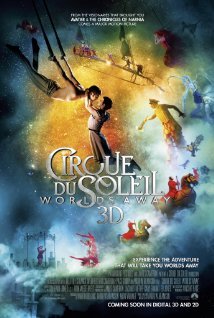 CIRQUE DU SOLEIL: WORLDS AWAY is a 3D movie giving audiences a taste of the famous acrobatic troupe’s shows. The plot is loosely constructed and not the main concern. Simply put, a girl and a performer known as The Aerialist are dragged into a dreamlike circus world. The young man is taken captive while the girl searches for him through the tents. Each of the tents features scenes from famous Cirque shows, including the one they did on the Beatles rock group.

For those unfamiliar with Cirque’s shows, WORLDS AWAY is a visual treat. However, it fails to reach the awe-inspiring heights it aims to achieve. Too often, the camera zooms in on the individual performers. Consequently, the audience loses the show’s grand complexity. WORLDS AWAY has no foul language. The dance motions are innocent and similar to gymnastics routines. There are several battle scenes, but they are artistic rather than violent. A couple bikini-clad women appear, there is some cross-dressing, and one character appears to be tipsy. Otherwise, WORLDS AWAY merely demands a caution for children.

(Ro, B, V, S, N, AA, D, Ho, M) Light Romantic worldview that supports love at first sight, with some moral elements featuring villains who kidnap and hold male protagonist but are rebuked; no foul language; light violence with artistic battle scenes containing staffs and arrows as weapons, but no deaths depicted; no sexual content, but protagonists share two brief kisses at end of movie; some cross-dressing, upper male nudity and skimpy outfits throughout the movie, but not sensually depicted; minor character sips a martini and acts tipsy; minor character holds unlit cigar; and, protagonist held captive by villains and a few brief instances of comical cross dressing by clowns.

Cirque Du Soleil’s acrobatics, aerial routines, and exotic costumes have become world famous since the troupe’s origins in the 1980s. Now transporting their stage show to the big screen, CIRQUE DU SOLEIL: WORLDS AWAY not only brings the audience closer to the performers than any front row seats, but also uses 3D technology in an attempt to make the experience more immersive.

The plot to WORLDS AWAY is loosely constructed and certainly not the movie’s main concern. Simply put, a girl and a performer known as The Aerialist are dragged into a dreamlike circus world. The young man is taken captive while the girl searches for him through the tents (each featuring scenes from Cirque shows).

Much like a piece of abstract art, WORLDS AWAY’s worldview is fairly ambiguous. There’s an element of Romanticism from the movie’s use of love at first sight. Also, one segment plays Beatles songs in the background, including “All You Need Is Love.” Surprisingly, the movie seems to be absent of New Age elements, paganism, or nature-worship.

The song “Lucy in the Sky with Diamonds” is treated literally, with a flying woman dressed in a jeweled costume. According to the movie’s website, the Cirque show CRISS ANGEL: BELIEVE makes an appearance. Criss Angel is a modern magician famous for his dark showmanship. The villain’s weapon is a pan full of a white glowing substance that flashes against the heroes with gestures that could be interpreted as a mystical summoning.

Since there are barely ten words in the entire film, there’s nothing resembling swearing.

One performer carries a martini in her hand and acts tipsy. Another dressed like a hobo carries a cigar in his mouth, but it isn’t lit. A skull is shown in the hand of one of the villains.

A note about the costumes: Despite the frequency of skimpily dressed women and upper male nudity, the costumes are rarely sensual. There is little, if any, cleavage and the camera carefully avoids lingering on bare skin. The dress the female lead wears is modest and even has leggings underneath. However, the male lead is shirtless throughout the movie. There are a few brief incidents of cross dressing, all presented in clownish fashion Costumes are often skin tight and from afar can look like tattoos on bare skin, but close up shots show opaque body suits. There are three exceptions to this. In one, a quick shot in the beginning shows a very fat bearded “lady” in a bikini. In another, a pair female performers have flashing lights covering the chest area of their costumes. Finally, one mildly sensual scene features a bikini-clad woman (with miniskirt) swimming in a bowl of water.

The dance motions are similar to a gymnastics or ice skating routines. They are trying to amaze their audience, not seduce them. There are several battle scenes as well, but they are artistic rather than violent.

WORLDS AWAY is a movie parents probably can comfortably take older children to see. For those unfamiliar with Cirque’s shows, this movie is a visual treat, but fails to reach the awe inspiring heights it clearly aims to achieve. Too often, the camera zooms in on the individual performers. Consequently, the audience loses the show’s grand complexity. An overuse of slow motion also weighs down the action. While more intimate, these stylistic choices hurt the overall performance. When combined with a vague plot patched with unconnected scenes, the result feels more like a 90-minute promotional for the Cirque shows rather than a cohesive whole. It provides a taste of how breathtaking it must be to see Cirque live, but doesn’t serve as a substitute.