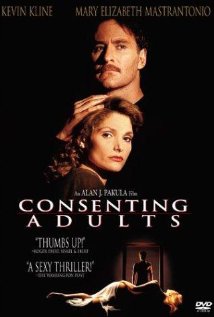 CONSENTING ADULTS is a perverse tale of "wife-swapping" turned deadly. A slightly sanitized variation on the BASIC INSTINCT motif, the movie focuses on murky sex scenes with beautiful women before they are whacked to death with a baseball bat. Further degrading this choppy film is a lack of focus, time lapses and plot inconsistencies.

CONSENTING ADULTS is a perverse tale of “wife-swapping” turned deadly. The movie depicts a flashy insurance salesman named Eddy who talks his neighbor, Richie, into “wife swapping” by switching beds in the middle of the night. It all turns out to be a set-up, entrapping Richie for murder.

CONSENTING ADULTS is a loser on all counts. Moral Americans will be repulsed by its sick vices, wife swapping and bashing, whereas whoremongers and horror fans will reject the movie as lame. The violence is mediocre slasher fare, yet will disturb those who don’t attend many movies. Sex scenes are murky and very brief, although quite pornographic. Interestingly, movie ads and billboards for CONSENTING ADULTS spotlight a half-naked woman with the words of the tenth commandment: “Thou shall not covet your neighbor’s wife.” This use of Scripture is misleading, since the movie is more manipulation and deceit than a cautionary tale of adultery and covetiveness. It isn’t even about casual sex without commitment so long as they’re CONSENTING ADULTS since the wives aren’t really aware of the swapping. Add to these flaws a lack of focus, time lapses and plot inconsistencies, and you have one choppy picture.