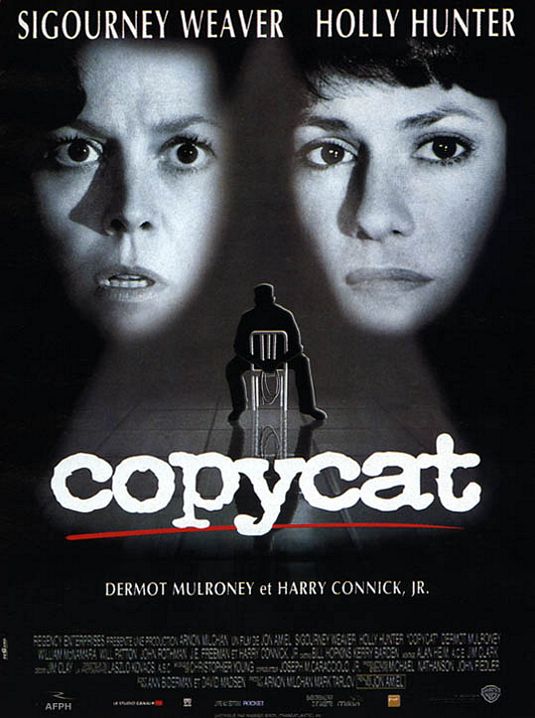 In COPYCAT, a serial killer copies murders of the past, duplicating everyone from Manson, to Dahmer and to Bundy. At times chilling and suspenseful, the movie has no qualms about parading gore and blood before us. It makes no attempt to make a greater statement about American society and ends up as a trivial piece of entertainment.

In COPYCAT, a serial killer copies famous murders of the past. Duplicating everyone from Manson, Dahmer and Bundy, this new madman seeks to place his name in the halls of American infamy. Dr. Hudson is giving a lecture at a University on treating and understanding the mind of serial killers. A killer in the audience meets her, afterwards, in the ladies room and strings her up. Rescued, she retreats to a life of fear in her home. A year later, an investigator and her partner uncover a series of murders they are unable to solve. The killer duplicates the murders of more famous criminals. The doctor joins forces with the police to foil the COPYCAT before he strikes again.

At times chilling and suspenseful, this movie plays off America’s fascination with serial killers. Thus, it assumes we are familiar with these madmen and have an interest in their grotesque and macabre ways. It has no qualms about parading gore and blood before us. Giving no insight in deterring crime nor criminal behavior, it, in the rotten tradition of NATURAL BORN KILLERS, essentially celebrates these deranged minds. Yet, unlike that movie, it makes no attempt to make a greater statement about American society, and thus ends up as a trivial piece of entertainment in the line of countless other get-the-killer detective stories.

Writer: Ann Biderman & Jay Pesson Allen BASED ON A STORY BY: David Madsen