"Confession Is Good for the Soul" 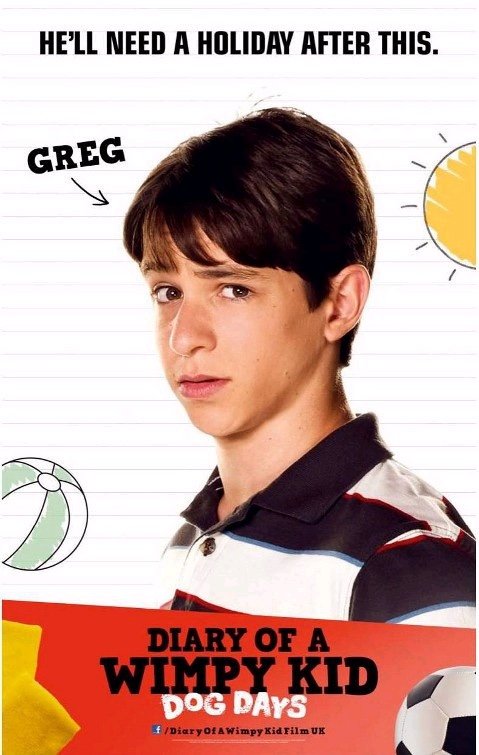 DIARY OF A WIMPY KID: DOG DAYS is the third movie in a series. In this one, young Greg Heffley has just completed seventh grade. He wants to spend summer vacation playing video games. Of course, his father and mother want him to do outdoor activities. Greg seems to find the perfect solution when his friend invites him to his family’s country club. The country club also happens to be where Greg can spend time with the girl he likes. A regrettable lie gets Greg into trouble with his father, however. Can Greg find a way to make it up to him?

DOG DAYS is very funny. The actors do a good job of making their characters seem real without losing any of the goofy humor. However, the story is somewhat episodic. It’s more like a series of events around a couple major themes rather than one cohesive plot. DOG DAYS teaches confession is good for the soul and honesty is the best policy. Some scatological humor and the bad behavior require caution for younger children.

(C, BB, Ro, L, V, N, MM) Light redemptive worldview that confession is good for the soul with some solid moral elements including lying mostly rebuked, honesty extolled, and father/son finally bond together, some Romantic elements; two light exclamatory MG profanities, plus some scatological content includes teenager calls his band “Loded Diper,” references to little children urinating in municipal pool, boy interrupted sitting on toilet, and diaper floats in municipal pool but nothing specifically gross is shown; light comic violence such as party gets wrecked, people get chocolate from smashed chocolate fountain all over themselves, boys get hit by tennis balls, teenagers gets trash dumped on him; no sex but two seventh graders hold hands and teenager pursues girl who wants nothing to do with him; upper male nudity around pools and in a locker room/community shower scene, boy sees partial upper rear male nudity in locker room, and boy loses swimming trunks while diving and little girl puts them out of reach but nothing is shown and no one else notices or sees him nude; no alcohol; no smoking or drugs; and, lying mostly rebuked, young scouts pull prank on conceited scout group, cheating revealed, boys sneak into country club, older brother blackmails younger brother but he’s not rebuked or punished though he does get trash dumped on him.

DOG DAYS, the third DIARY OF A WIMPY KID movie, is a bit episodic, but it’s a fun family movie. Some scatological humor and some bad behavior that’s not totally rebuked warrant caution for younger children, however.

In this second sequel, young Greg Heffley has just completed seventh grade and wants to spend the summer playing video games. Of course, his father and mother, Frank and Susan, want him to do some outdoor activities.

The first day, Greg fools his father into thinking he was playing outside all day, but his lie is soon found out. Then, Greg discovers that the girl he likes, Holly, spends most of her days at the country club where Greg’s friend Rowley has invited him. Greg begins to enjoy his days with Holly and Rowley, but then his father says he’s gotten Greg an unpaid internship at his office.

Greg invents another lie, that he’s actually got a paying job at the country club. When that lie is finally found out, Greg has to figure out a way to get back in his father’s good graces. Eventually, he and his father discover something that bonds them together in a way they never thought possible.

DOG DAYS is very funny. Also, all the actors do a good job making their characters seem real without losing the goofy humor. Of course, the heart of the movie is Zachary Gordon and Steve Zahn as Greg and his father. They do a great job, as does Robert Capron as Greg’s best friend, the wimpy but likeable Rowley.

The story in DOG DAYS, however, is somewhat episodic. It’s more like a series of events around a couple major themes rather than one cohesive story.

Although Greg’s lying is rebuked, there’s no real punishment meted out. Also, the first scene is set at the municipal pool, where there are some jokes about young children relieving themselves in the pool and one about a diaper floating in the pool. There are no gross shots in any of these jokes, however. The humor is implied rather than really shown.

The good news is, at the end of the story, Greg finally bonds with his father. Also, Greg’s father teaches him to confess when he does wrong and apologize. Thus, the story shows that confession is good for the soul as well as one’s personal relationships.

A couple subplots should be mentioned. In one, Greg’s older teenage brother, Roderick, blackmails Greg into letting him sneak into Rowley’s country club. In another, Holly’s sister, Heather, is shown bossing Holly and everyone else around. Heather gets her comeuppance, but Rodrick does not.

Thus, all the bad behavior by the children isn’t punished or completely rebuked. Because of this and the light scatological humor, DIARY OF A WIMPY KID: DOG DAYS comes with a caution for younger children.

Rent or Buy DIARY OF A WIMPY KID: DOG DAYS: