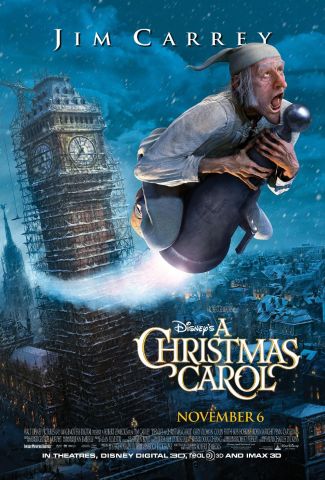 The animated DISNEY’S A CHRISTMAS CAROL is a magnificent masterpiece. It stars Jim Carrey as Ebenezer Scrooge. Seven years after the death of Scrooge’s business partner, Jacob Marley, Marley’s ghost visits Scrooge at home on Christmas Eve. Burdened with long chains tied to heavy chests, Jacob warns Scrooge that he too is headed toward damnation unless he changes his miserly, sinful ways. Marley tells Scrooge that three “spirits” will take him on a frightening, life-changing journey through scenes of Christmas Past, Christmas Present, and Christmas Yet-To-Come.

DISNEY’S A CHRISTMAS CAROL is achingly poignant, extremely frightening, and absolutely spellbinding. It is a stupendous artistic achievement in animated entertainment, with a remarkable performance by Jim Carrey, who also plays the three spirits. Director Robert Zemeckis, of FORREST GUMP and THE POLAR EXPRESS, adapted the novel by Charles Dickens. His sensitive adaptation superbly captures the fear, conviction, depth, and artistry of this classic tale. Most importantly, it brilliantly portrays the story’s Christian message, with redemptive references to Jesus Christ and the Bible. A CHRISTMAS CAROL is a terrific work, but it is too frightening for young children and other susceptible viewers.

(CCC, BBB, L, V, M) Very strong Christian, moral, born-again, redemptive worldview with overt references to Jesus Christ, God, meaningful and theologically powerful Christmas carols, the Bible, church; one exclamatory “My God!”; sometimes very scary violence includes ghostly face on doorknob causes old man to fall down, ghost wearing ghostly chains shackled to ghostly chests throws the chests into room, man falls a couple times from great heights, extended scene where scary carriage with scary black horses with red eyes chases man around some London streets and alleys, large barrel comes spinning toward man, images of other scary ghosts flying through the air (one of whom is banging his own head with a book of some kind), images of a dead man in a coffin, man slides down an icy hill for fun but falls down, the Ghost of Christmas Present turns into a skeleton and eventually to dust at the stroke of midnight, man shrunk down to tiny size must avoid a man of normal size trying to kill a large rat, man shrunk down to tiny size escapes injury or death by hiding in an icy drain pipe of some kind; no sex; no nudity; implied alcohol use in toasts; no smoking; and, servant woman steals clothes and curtains of dead rich man, and selfishness and sin rebuked.

The new animated DISNEY’S A CHRISTMAS CAROL from Walt Disney Pictures is a magnificent masterpiece, an instant Christmas classic. It may be the best, most Christ-centered version of this classic tale from Charles Dickens ever made.

Even so, please note that DISNEY’S A CHRISTMAS CAROL is too frightening for young children and susceptible adults. It shows the very frightening demonic aspects of the wages of the sin, especially avarice, to convict even the most self-centered viewer so they will understand the power of repentance and new life in the Spirit of Christmas. In many ways, it is analogous to the great sermon by Jonathan Edwards, “Sinners In the Hands of an Angry God,” and so it is amazing that the audience clapped at both screenings MOVIEGUIDE® attended.

DISNEY’S A CHRISTMAS CAROL stars Jim Carrey in a brilliant motion capture performance as Ebenezer Scrooge. Closely following the book, the movie introduces Scrooge looking down during Christmas Eve at the coffin of his late business partner, Jacob Marley. Scrooge reluctantly parts with two coins for the mortician, but takes back the traditional coins lying on Marley’s sunken eyes.

Seven years later, Scrooge’s miserly misanthropy has just gotten worse. He rudely turns down a dinner invitation from his nephew, who loves Christmas. He also refuses to buy more coal to keep his hard-working employee, Bob Cratchit, from freezing. Finally, he refuses to give any money to two charity workers who want to provide food and shelter to the poor and needy during Christmas. “Bah humbug!” Scooge says to all of this.

That night, the ghost of Jacob Marley visits Scrooge at his home. Burdened down with long chains tied to heavy chests, Jacob warns Scrooge he is headed toward damnation like him unless he changes his ways. Marley tells Scrooge three “spirits” will haunt him, showing him scenes from Christmas Past, Christmas Present, and Christmas Yet-To-Come.

Though appropriately scared out of his wits, Scrooge decides that this is just more humbug. It’s really not, however. The three spirits arrive separately and take Scrooge on three eye-opening journeys exposing many harsh truths about him and those around him. Ultimately, Scrooge must open his own heart and soul to God and undo all his years of sin before it’s too late.

DISNEY’S A CHRISTMAS CAROL is achingly poignant, vivid, funny, scary, and absolutely spellbinding. It is a stupendous achievement in animated entertainment, with a remarkable performance by Jim Carrey, whose wonderful, eloquent expressions and movements are perfectly brought to life by the animation technique of motion capture, which previously was used to bring to life Gollum in the LORD OF THE RINGS trilogy. Here, however, the process takes a giant leap forward with Mr. Carrey’s performance and the animation staff’s talents. Carrey also did the motion capture and voice work for the three spirits.

Director Robert Zemeckis (FORREST GUMP, THE POLAR EXPRESS, WHO FRAMED ROGER RABBIT?, and BACK TO THE FUTURE), who also adapted the screenplay, surpasses himself with A CHRISTMAS CAROL. His sensitive adaptation superbly captures all the fear, conviction, depth, and artistry of this classic tale by one of the greatest writers who ever lived.

Most people know the story of A CHRISTMAS CAROL now by heart. Even if they haven’t read the Dickens story itself (which they should), there have been many excellent translations into theatrical movies and television. This version stands out for several reasons.

First, it captures the nightmarish dreamlike, imaginative quality of the story. The realistic live action animation gives some sweeping nightmarish qualities that are missed in previous versions. The extremely frightening nightmare is essential because, unless Scrooge is truly convicted of his sins, he will not understand the need for repentance and revival. This is a truly transformed Scrooge. Jim Carrey and the animators have done a wonderful, powerful job of capturing all the redemptive qualities of this character and his journey.

Most importantly, the movie incisively portrays the story’s theological Christian elements. The movie mentions the Father, Son, and Holy Spirit. Tiny Tim mentions the Bible prophecy about Jesus making the blind see and the lame to walk. Scrooge pleads several times for a second chance. The movie ties these scenes beautifully together with traditional Christmas carols that mention Jesus as our Savior and sing, “Glory to the newborn King!”

Finally, when Tiny Tim says, “God bless us everyone!” at the end, all of us understand the need for God’s blessing. It is not just a simple be happy, don’t worry. It is the blessing that gives New Life to people who have pursued idols that have chained them to their sins.

With UP and A CHRISTMAS CAROL, Disney has released two great soul-stirring masterpieces in one year, movies that should stand the test of time and that every media-wise family will want to see gladly again and again.

In the final analysis, Christmas Carol is magnificent, captivating, convicting, and redemptive. It will be a reel blessing to all who see it. It is one of the few movies that MOVIEGUIDE® considers a “must see” for people of faith and values. However, please be advised that, as noted above, A CHRISTMAS CAROL is too frightening for young children and susceptible adults.