"Bottom of the Barrel Humor" 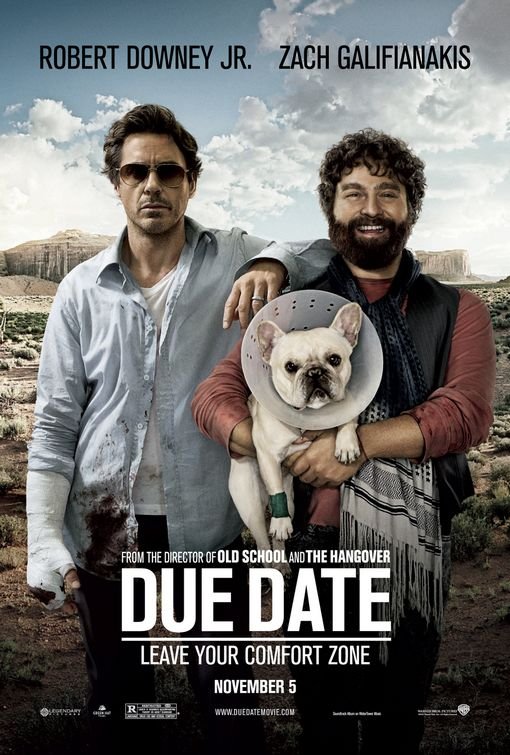 DUE DATE is an R-rated comedy starring Robert Downey, Jr. as father-to-be Peter Highman. Peter is a married businessman headed home to Los Angeles, where his wife expects to give birth at any moment to their first child. Zack Galifianakis plays Ethan Tremblay, an aspiring but witless actor. Ethan has just come from his beloved father’s funeral and carries his father’s ashes in a coffee can while he seeks both the perfect burial for his father and the fulfillment of his dream to become an actor. A comedy of errors ensues as the two mix up their bags, get kicked off a plane, and Peter finds himself with no baggage, no wallet, no identification, and no cash. All of this conspires to land him in the passenger seat of a very compact rental car with the instigator of all his woes, Ethan the actor.

DUE DATE is a crude version of the hilarious 1980s comedy PLANES, TRAINS AND AUTOMOBILES. Poor direction, crass humor, much foul language, and lots of pot smoking undercut the movie’s comedy and sentiment. The end effect is that viewers give up caring for these characters and their story.

(C, B, PaPa, FR, LLL, VV, SS, A, DDD, MM) Light Christian, moral worldview marred by strong crude humor and pagan behavior, including one reference to bad “Karma”; 58 obscenities and 13 profanities, plus a half dozen scatological references to male and female sexual organs; strong, mostly comic violence includes one fight in which man is hit with a toy by a young teenager, and he in turn punches the boy in the stomach, man hits another with a stick, half a dozen other mild elements, three car crashes, various destruction of property; implied masturbation in the car by Ethan, dog also masturbates and is shown rubbing itself, and several references to it; no nudity; no alcohol use; constant marijuana smoking by Ethan, then finally by Peter; and, stealing two cars and lying.

DUE DATE starts out as a promising and entertaining iteration of the buddy movie, but declines from there.

Robert Downey, Jr. plays father-to-be Peter Highman who, while in Atlanta on business, has the unfortunate luck of running into the naïve and clueless aspiring actor Ethan Tremblay (Zack Galifianakis). Peter is a married businessman headed home to Los Angeles, where his wife expects to give birth at any moment to their first child. Ethan, on the other hand, has just come from his beloved father’s funeral and carries his father’s ashes in a coffee can while he seeks out both the perfect burial for his father and the fulfillment of his dream to become an actor.

A comedy of errors ensues, in which the two get their bags swapped. This causes Peter to be called out at security for what is actually Ethan’s marijuana bong. Finally aboard, Peter’s temper gets the better of him, and the two end up possible terrorist suspects and on the “No Fly List.”

Meanwhile, Peter’s wife is about to go into labor at any moment, and he finds himself with no baggage, no wallet, no identification, or cash. All of this conspires to land him in the passenger seat of a very compact rental car with the instigator of all his woes, Ethan the actor.

What follows are a half dozen Laurel & Hardy-esque vignettes chock full of physical humor as these two opposites are forced to endure a cross-country marathon in hopes of getting Peter to the hospital on time for the birth of his child.

Both actors bring formidable comedic chops to the table, and offer up some very funny moments in DUE DATE. There are even some almost poignant moments bringing up themes of love, forgiveness and redemption. Unfortunately, however, a weakly constructed storyline leaves these actors scrambling for bottom of the barrel humor in order to hold their audience’s attention.

Somehow surviving the night from Hell, Peter grabs his chance when Ethan goes to shower in the Rest Area, and steals the rental car. He would be on his way to LA except for noticing Ethan’s father’s ashes sitting in the can next to him. Relenting, Peter returns and reconciles with donuts and coffee, and Ethan is none the wiser.

Even so, things just keep getting worse. Ethan falls asleep at the wheel, landing them both in the emergency room. If that weren’t enough, the two find themselves inadvertently off course at the Mexican border with no ID. Somewhere between Peter’s arrest and Ethan’s rescue, however, the two seem to forge a kind of friendship. All of which eventually leads Ethan with his father’s ashes to the edge of the Grand Canyon for a grand gesture.

Edited with the sounds of “Amazing Grace” being sung in the background, there is an almost poignant and sweet moment to this scene until inexperienced direction disallows the sentiment and insists on undercutting it and any semblance of real value with crude language and more disgusting bottom of the barrel humor. The end effect is the audience gives up caring for these characters and their story. What was a promising and fun redux of the buddy movie genre devolves into a remarkably dull movie. Body humor, crass jokes and a constant cloud of marijuana smoke can’t distract viewers long enough from poor direction. For that and a multitude of other obvious reasons, MOVIEGUIDE® cannot commend this movie for family viewing.