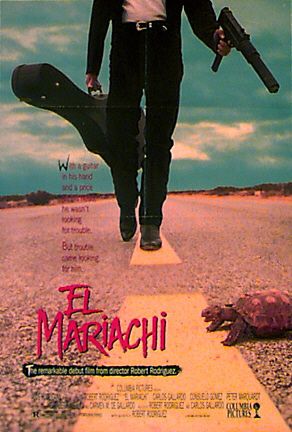 EL MARIACHI is the debut production of multi-talented filmmaker, Robert Rodriguez, who succeeded in creating a marketable full-length action film for a mere $7,000. For that tiny sum, there are surprisingly good performances, a lot of energy (which at times becomes hyperkinetic) and a refreshing absence of sex and abusive language. Unfortunately, crude shoot-em-up violence is unnecessarily bloody.

The young writer/producer/director responsible for EL MARIACHI has created a full-length movie for a mere $7,000. In the movie, a young singer, the latest in a long line of mariachis, wanders into a town looking for work. He is mistaken for the murderous Azul, who totes weapons in a guitar case. Azul has been slated for execution by Moco, a rich drug lord who commands an army of assassins. Our hero has barely checked into a motel when he is set upon by Moco’s henchmen. His escape leads to a local bar owned by the beautiful Domino, for whom he sings splendidly in a “command performance.” There is considerable shooting as Moco and Azul try to get to one another, and the poor mariachi merely attempts to stay out of the way and woo his new lady love.

Much of the hyperkinetic action is played tongue-in-cheek. The young singer survives, but not without suffering a broken heart. So what does EL MARIACHI accomplish for $7,000? Performances are surprisingly good, and there are a few clever gags. However, the violence is unnecessarily bloody, even with rather unconvincing special effects. Interestingly, there is no abusive language and only the most oblique suggestion of possible sexual immorality.