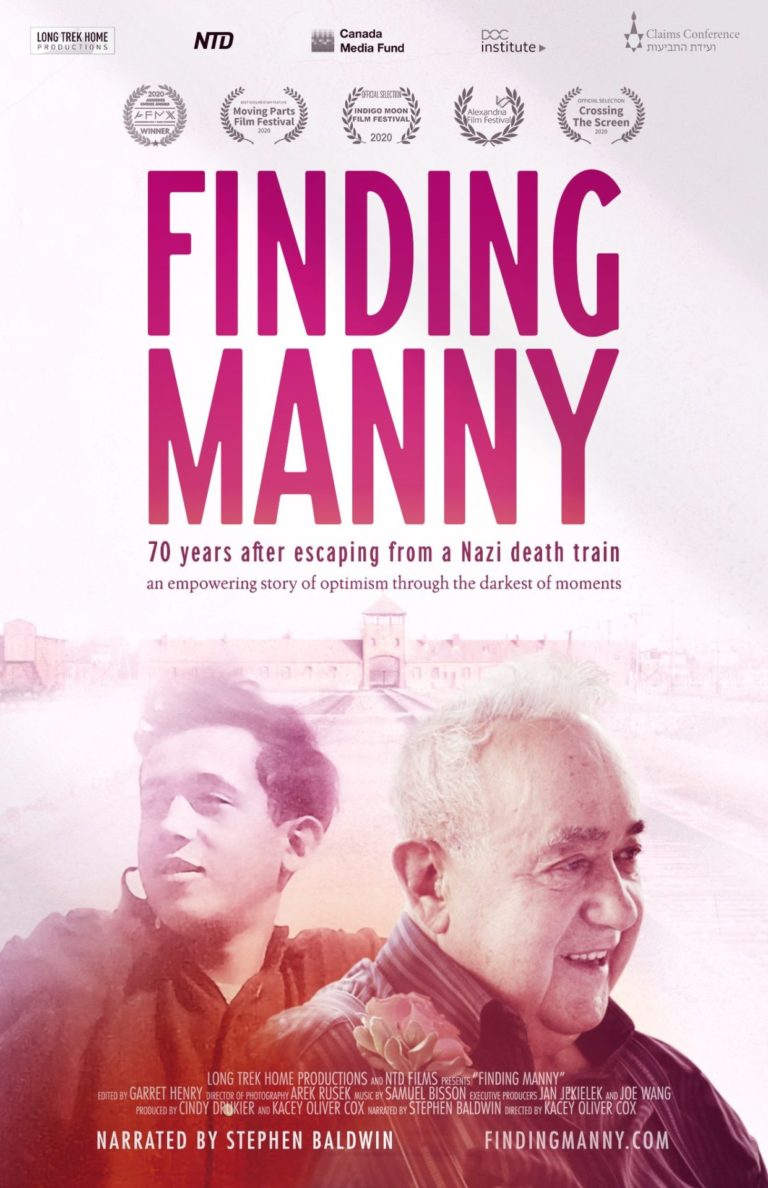 FINDING MANNY is an hour-long documentary about a Holocaust survivor named Manny living in Toronto, Canada and about to turn 90 years old. Manny is contacted by Anna at a children’s school in Germany who’s been looking for Holocaust survivors so they can come and speak at the school. She wants Manny to help the children in the school and the surrounding village understand the Holocaust. At first, Manny doesn’t want to go because of all the painful memories. However, he finally concludes that he needs to go. The visit to Germany and Poland reacquaints Manny with his past and gives his family a new perspective on Manny's life.

FINDING MANNY is extremely interesting because of Manny’s perspective in the Holocaust. In fact, his optimistic perspective highlights some of the pain and suffering of the Holocaust. His journey also helps his children understand him. As they say, whenever they got into a problem when they were younger, Manny would become disconnected. When they get to Poland, they realize how trivial their problems are, especially compared to what he and his parents went through in the Holocaust.

(BBB, C, VV, N):
Dominant Worldview and Other Worldview Content/Elements:
Very strong moral worldview about an almost 90-year-old Jewish man being asked to return to Germany to tell the students at the school where he was sheltered about the Holocaust during World War II, although he had refused to talk about it for many years
Foul Language:
No foul language
Violence:
Old news footage of concentration camps with the dead bodies that are naked, though nothing is visible, being thrown into heaps and other degradations and discussions of the violence of the Holocaust
Sex:
None
Nudity:
Old news footage of nude Holocaust victims piled up and being tossed into wheelbarrows, carts and ditches
Alcohol Use:
No visible alcohol use
Smoking and/or Drug Use and Abuse:
No smoking or drugs; and,
Miscellaneous Immorality:
No miscellaneous immorality.

FINDING MANNY tells the story of a man about to turn 90 who’s gotten an unexpected message from Germany asking him if he will return to the school where he was sheltered in his late teenage years after years of living in concentration camps, but Manny has never told his family or anyone what he experienced. FINDING MANNY is an extremely interesting journey driven by the questions whether Manny can finally open up about his past and how it will impact his family.

At the beginning of the movie, Manny is contacted by Anna at a children’s school in Indersdorf, Germany who’s been looking for Holocaust survivors who were there so they can come and speak at the school and help the children and the surrounding village folk understand the Holocaust. Another German student, Erwin, also has been trying to find Manny. At first, Manny doesn’t want to do go. He is optimistic and doesn’t want to bring the nightmare of the Holocaust back into his life. Manny also has a large family who love each other.

The movie has several documentary flashbacks to the persecution of the Jews in WWII, narrated by Stephen Baldwin. The first flashback tells us that Manny arrived at the school in Indersdorf, Germany at the age of 17.

Manny’s wife, Freda, feels Manny should go to Germany to get in touch with his past and tell the children about the Holocaust. Throughout the movie, Manny’s children and his wife give their perspectives toward their youth with Manny and toward this journey. Manny finally comes to the conclusion he needs to go.

They decide to go to Poland first as a whole family and visit each town where he lived and then each place where his parents and siblings hid to escape the Nazis. With flashbacks, they talk about the Germans setting up ghettoes of Jews in 1941 and finally deciding to liquidate all the Jews in 1944. The Polish and then German guides in each town describe what happened, refreshing Manny’s memory, which is quite sharp, by the way.

In Poland, his family had been put into different concentration camps and often moved to others. He and his father were still together. During one of the moves on the freight trains, Manny and his father are separated. When Manny comes to find his father and yells his name, someone yells back that he’s died.

Manny is moved to Germany. In Leipzig, where he makes munitions as part of forced labor. He thinks his is the only camp, but now on this journey he finds out there were 700 camps in Leipzig alone. The forced labor is intentional and widespread, and the liquidation is also intentional.

Manny escapes by jumping out of a box car on a train to a death camp at the end of the war. He ends up at the children’s home in Indersdorf, which serves three meals a day to Manny and the other children. There is a picture of a nun on the wall.

At least two million Jews were killed in Poland and six million overall.

With all of his journey reacquainting Manny with his past and introducing his family to his past, Manny can now talk about it. Manny says he’s an optimist. He survived against all odds. He holds nothing against the Germans and Poles he meets, because deals with each person as an unique individual, which is the biblical way. He says he’s not a victim and not entitled.

His journey also helps his children understand him. They tell us that whenever they got into a problem when they were younger, Manny would disconnect. When they get to Poland, they realize how trivial their problems are, compared to what he and his parents went through in the Holocaust.

FINDING MANNY is highly recommended for children who are age 12 and up, with caution, because of the scenes of some of the death camps, hangings and other cruelty to the Jews. Otherwise, FINDING MANNY is very clean, extremely moral and offers strong hope in the midst adversity.

FINDING MANNY is now playing at virtual film festivals. For tickets to see the movie at one of these upcoming festivals, visit www.findingmanny.com.