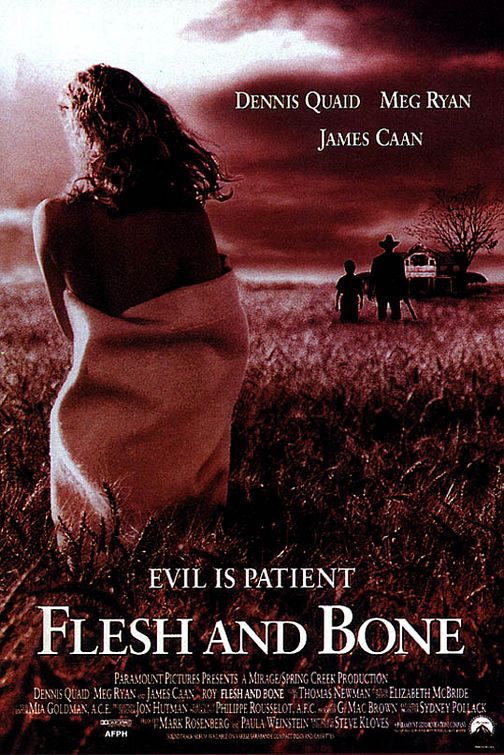 In FLESH AND BONE, a couple's adulterous relationship is threatened when the man's father realizes that his son's girlfriend is the sole survivor of a family he murdered years earlier. The dreary story, the blatant disregard for God's commandments and the depiction of a violent and troubled man, combine to create a desolate attempt at entertainment.

FLESH AND BONE tells the story of a pedestrian man and his dull life of adultery, theft, violence, and murder. The outcome is that of a monotonous film filled with bursts of worldly means and sorrowful ends. The movie begins with a picturesque view of a typical American family winding down after a hard day. A young boy knocks at the door appearing to be abandoned. The family takes him in and gives him a bed for the night. As the night wears on, the father is awakened by rustling. He sneaks downstairs and sees the boy loading a bag with their belongings. Then he sees a man with the boy. He raises his shot-gun as the other man shoots him in the chest. The horror continues as the stranger kills the man’s wife and son. The only one he spares is a baby girl, Kay, who cries throughout the night as the murderer vanishes into the darkness with his own son. Years later, the son meets the grown baby girl, and they fall in love and commit adultery.

The dreary story, the blatant disregard for God’s commandments and the depiction of a violent and troubled man, combine to create a desolate attempt at entertainment. The initial positive impression of the movie vanishes with the dramatic violence in the first ten minutes. The second impression suggests that this turbulent movie is not worth the viewer’s time or money.