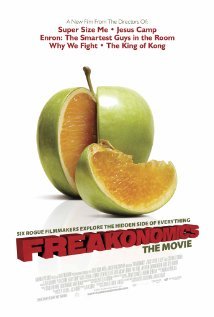 FREAKONOMICS is a fascinating and largely entertaining documentary analyzing the theories of a University of Chicago and a journalist from their book by the same name. The book became a worldwide phenomenon since being released in 2005. For instance, one main segment explores how the names given people at birth are often affected by their race or social standing and affect their later success in life. Another studies whether giving poor children money to improve their grades pays off with success. The most controversial segment is one suggesting abortion of potential young criminals is the main reason for recent reductions in violent crime in the United States.

Some of the segments in FREAKONOMICS are intriguing and worth pursuing. However, as the abortion segment shows, there’s a strong sense of moral relativism in some segments. This leads to a Romantic worldview overall suggesting that the ends justify the means. The movie also contains brief foul language, brief drug references and suggestive dancing by skimpily clad women in one scene. Thus, extreme caution is warranted. Viewers should be careful and do research of opposing viewpoints before they accept anything in FREAKONOMICS as dogma.

(RoRo, L, V, S, N, D, MM) Strong Romantic worldview analyzes the world in terms of incentives driving people’s behavior and economics, without regard to God or any deep sense of morality, so some segments are intriguing but one segment on abortion is rather abhorrent, suggesting the ends justifies the means; one “s” word in context of a re-enactment of a criminal shoplifting and being yelled at; violence includes animated depictions of robberies, beatings and guns in the context of discussing violence in society and scenes of Japanese sumo wrestlers; scene of three strippers dancing suggestively, but with panties on and upper torsos covered by signs bearing their names; male sumo wrestlers are depicted wrestling and with their bare behinds partially exposed and upper male nudity due to the loincloth-style attire utilized in the sport plus scene of strippers with panties and upper torsos covered with signs; no alcohol use; no smoking but animation depicts drug use; and, strong moral relativism in one of four main segments, as the issue of whether legalized abortion reduced the violent crime rate in the U.S. by terminating potential young criminals is discussed without any moral context as if the ends justifies the means.

FREAKONOMICS is a fascinating and largely entertaining documentary analyzing the theories of University of Chicago economist Steven D. Levitt and journalist Stephen J. Dubner from their book by the same name. The book became a worldwide phenomenon since being released in 2005.

Shot in different segments by different directors, the movie analyzes the ways in which everyday situations affect the bigger economic picture of our lives and by extension, society. For instance, one segment explores how the names given people at birth are often affected by our parents’ race or social standing and can have a positive or negative effect on gaining employment or other successes throughout our lives. Another segment explores how sumo wrestling, while imbued with the image of a time-honored tradition in Japan, is actually the most corrupt sport on earth. Another studies whether giving poor children money to improve their grades pays off with success. Smaller segments detail how public schoolteachers have been found to cheat for students on standardized tests in order to improve their school district’s results, and how the use of incentives as rewards even affects a toddler who is offered M&M’s every time they properly use the toilet.

All well and good, but the film’s remaining major segment explores the extremely dark issue of whether the fact that America’s violent crime rate has dropped dramatically since the early 1990s, when it had been expected to soar. The economist attributes that to the possibility that Roe v. Wade has greatly diminished the pool of potential young career criminals. During this segment, the filmmakers and authors knock down numerous other possible reasons and arrive at this conclusion being likely, leaving out all moral considerations of the issue in a stark balance-sheet approach that doesn’t take into account whether taking human life justifies the potential crime-saving opportunities down the line. Nor do they account for the equal likelihood that abortion has slaughtered millions of doctors, lawyers and other productive members of society. This is a controversial segment that also doesn’t acknowledge that numerous other popular social scientists and economists, including some who are “pro-choice”, have argued strongly against these findings ever since the book was published.

The segment, however, is couched between other portions that intrigue, entertain or enlighten. Thus, while mature viewers should approach all of the segments with some caution, most should experience an intellectually satisfying, provocative time at the movies. Since MOVIEGUIDE® cannot, however, exhaustively research all the points made in this movie, viewers should be careful and do research of the opposing viewpoints before they accept anything in FREAKONOMICS as dogma. The movie also has brief foul language, brief drug references and suggestive dancing by skimpily clad women in one scene.