GORDON LIGHTFOOT: IF YOU COULD READ MY MIND 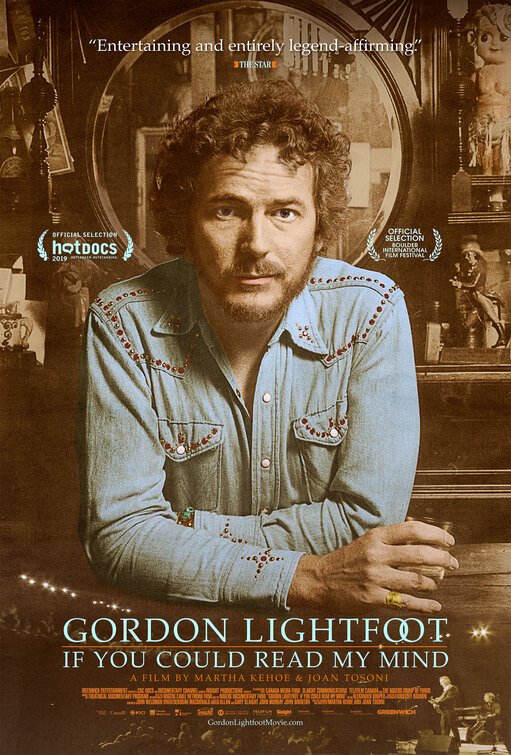 GORDON LIGHTFOOT:  IF YOU COULD READ MY MIND is a documentary about the Canadian singer and songwriter. Lightfoot is considered one of the best folk slash country composers and lyricists, behind only Bob Dylan and Johnny Cash. The movie details his career, starting with his singing as a choirboy in a local church in his hometown. With lots of talent and hard work, Lightfoot became a sensation during the folk music craze in the 1960s. Elvis Presley and Johnny Cash are among those who recorded his songs. Lightfoot’s popularity extended into the 1980s, and he’s still performing at 81 in crowded venues.

GORDON LIGHTFOOT:  IF YOU COULD READ MY MIND is an excellent, heartfelt, loving introduction to Gordon Lightfoot’s music. It contains scenes of Lightfoot’s famous performances of some of his most famous, best songs. It also contains interviews with famous fans as well as longtime band members and business associates. That said, the GORDON LIGHTFOOT documentary avoids straying too deeply into Lightfoot’s sometimes tumultuous personal life. So, the movie’s worldview is a little superficial, mixed with Christian and non-Christian messages.

(Pa, C, B, CapCap, Ro, H, L, V, S, AA, DD, M):
Dominant Worldview and Other Worldview Content/Elements:
Light mixed pagan worldview with positive Christian, moral values and content such as a couple references to God and church, man expresses gratitude and admits he was “gifted,” man honors his parents in an interview, and parents express support for their son in an interview, singer started as a choirboy in a Catholic church, there’s the image of a sign saying “Jesus saves,” with strong capitalist elements promote hard work and using your talents to support yourself and your family, and some Romantic, humanist element supporting such things as self-expression, use of psychological terms like unconscious, and man stops drinking, but it’s portrayed as self-actualization, though with support from his sister and friends
Foul Language:
Seven obscenities (one “f” word and the rest less strong such as “h” and “d” words
Violence:
No depicted violence, but man sings about the wreck of a ship during a terrible winter storm, which killed 29 men, and newsreel images are shown of the ship underwater
Sex:
No depicted sex, but past affairs are mentioned
Nudity:
No nudity
Alcohol Use:
Alcohol use and references to drinking too much and getting over an alcohol problem
Smoking and/or Drug Use and Abuse:
Smoking depicted and mention is made of the drug overdose that killed comic actor John Belushi, which was administered by an ex-girlfriend of the documentary subject; and,
Miscellaneous Immorality:
Regrets mentioned about not treating people right, and man makes a reference to guilt trips, but his use of the term is vague.

GORDON LIGHTFOOT: IF YOU COULD READ MY MIND is a documentary about the Canadian singer and songwriter, who’s considered one of the best folk and country composers and lyricists, behind only Bob Dylan and Johnny Cash. The GORDON LIGHTFOOT documentary is an excellent, heartfelt, loving introduction to Gordon Lightfoot’s music, but it avoids straying too deeply into Lightfoot’s sometimes tumultuous personal life, so the movie’s worldview is a little superficial, mixed with good messages and bad messages.

The documentary begins humorously, with the 80-year-old Gordon Lightfoot talking about one of his early songs that he loathes, a ditty titled “For Loving Me.” The song is about a mean ladies’ man who tells each girl he leaves it’s her own fault for loving him so much. Lightfoot uses an expletive to say how much he hates the song, because it’s too mean-spirited. It’s interesting that, in every compilation album of his greatest hits, the song is paired with a second song, “Did She Mention My Name,” where a homesick man asks someone he meets from his hometown if he talked with the homesick man’s high school sweetheart, and, “By the way, did she mention my name?” The pairing of the two songs gives a poignant subtext to the first song, leaving the impression that the scorn in the ladies’ man’s song contains a lingering, unspoken, personal pain. It’s this kind of evocation of personal pan that infuses many of Lightfoot’s best romantic ballads. However, Lightfoot’s songs don’t just talk about lost love. They also speak about the joys of romantic love (“Beautiful”), traveling (“Carefree Highway”), returning home “Alberta Bound”), injustice (“Don Quixote”), the wonders of nature (“Ode to Big Blue”), and history (“The Wreck of the Edmund Fitzgerald” and “Canadian Railroad Trilogy”).

From this first scene, the movie moves swiftly to give viewers an overview of Lightfoot’s career. Encouraged by his mother, he started as a boy soprano in a local Catholic church in his hometown and sang old standards with a band in high school. At age 19, he traveled to Los Angeles to study composition and orchestration for two years at Hollywood’s Westlake College of Music. Using his new knowledge for reading and writing music, he started writing more and more songs. He became a sensation during the folk music craze in the Mid 1960s, with other famous singers, including Elvis Presley, Johnny Cash, Marty Robbins, and Peter, Paul & Mary charting their own hits singing his songs.

As the movie documents Lightfoot’s musical career, it briefly discusses his bout with heavy drinking in the 1970s and 1980s, until he suddenly decided to quit drinking cold turkey in 1982. The movie makes even shorter references to Lightfoot’s multiple marriages. However, from what it does say, it’s easy for an attentive viewer to calculate that Lightfoot has had six children from four different women, including two ex-wives. The movie’s filmmakers don’t interview any of the ex-wives or ex-girlfriends, but they do interview several fans, including fellow folksingers Ian and Sylvia, singer Sarah McLachlan, singer Anne Murray, and actor Alec Baldwin, as well as longtime band members and business associates.

GORDON LIGHTFOOT: IF YOU COULD READ MY MIND is an excellent, heartfelt, loving introduction to Gordon Lightfoot’s music. As such, it contains many scenes of Lightfoot’s more famous and recent performances of some of his most famous, best songs. Two of the highlights are performances of what are, arguably, Lightfoot’s two best songs, “The Canadian Railroad Trilogy,” and his 1971 hit, “If You Could Read My Mind.” “The Canadian Railroad Trilogy” is a brilliant tribute to Canadian history, written on the Canadian Centennial in 1967. Not only does the history of Canada come alive in that song, so does the very idea of history itself, specially the role of average people who participate in great historical movements (you can hear the song and see the lyrics here). “If You Could Read My Mind” is a haunting, moving portrait of Lightfoot’s divorce with his first wife. At such, it expresses the feelings millions of couples have felt during the pain of a breakup. If we would have one complaint about the movie’s song selections, it would be that the movie doesn’t contain many of Lightfoot’s more joyful songs, such as “Alberta Bound,” “Carefree Highway” or “Cotton Jenny” (see this version of “Alberta Bound” for a taste of that). It does have a few lyrics from his powerful song against injustice, “Don Quixote.”

Also, the movie avoids straying too deeply into Lightfoot’s sometimes tumultuous personal life. As noted above, he’s had two failed marriages and at least three other major failed relationships. The movie doesn’t delve at all in the whys and wherefores of those relationships, but, during the movie’s ultimate interviews with Lightfoot, the older Lightfoot admits that he has “regrets.” Also, viewers learn that his first divorce was so painful that he vowed never to get married again and stayed true to his word for 16 years after his first divorce.

During the present-day interviews with Lightfoot, the man presents some humanist psychology about where he gets his ideas, melodies and lyrics for his songs. He says he gets many of his ideas from his “imagination” and his “unconscious.” Music writing for him is an isolated affair, where he just forces himself to sit down at a table with some musical notepaper and just starts writing. Sometimes a location will inspire him, such as the location of an isolated cabin in the Canadian wilderness during winter, a location that helped him write the lyrics to “Song for a Winter’s Night.” Of course, his hit song “Wreck of the Edmund Fitzgerald” was famously inspired by a 1975 Newsweek article about the sinking of a bulk carrier during a terrible winter storm on Lake Superior, where 29 men lost their lives.

Thus, the movie doesn’t delve too deeply into Lightfoot’s personal life or the specific messages in his songs. Instead, it treats the songs and lyrics as profound poems, sung with feeling and power by Gordon Lightfoot’s strong, unique, pleasing singing voice. Consequently, the movie’s worldview is a little superficial, dealing lightly with many topics and filled with both good, Christian messages and bad non-Christian messages. For example, Lightfoot got his start singing in church but says his ideas come from his imagination and his “unconscious.” The movie hints that he overcame his addiction to alcohol by self-actualization, with help from his sister and friends. Lightfoot also says, though, that he’s extremely grateful for his success and has been “gifted” with talent. However, the movie also shows that part of his success is because he’s a hard worker, but there are also hints that his work ethic, in addition to his hard drinking and infidelity, is one of the things that drove him away from his first wife and came between him and his subsequent paramours before his second marriage. The GORDON LIGHTFOOT documentary also contains a couple references to God, Lightfoot’s childhood church and a sign saying, “Jesus saves.”

In the end, it’s the music, the lyrics and the pleasing voice that are Gordon Lightfoot’s biggest legacy. Though his songs are not particularly religious or Christian, their beautiful melodies and rich, powerful, evocative lyrics, sung by a consummate artist, will not be forgotten by anyone who takes the time to listen and enjoy them.