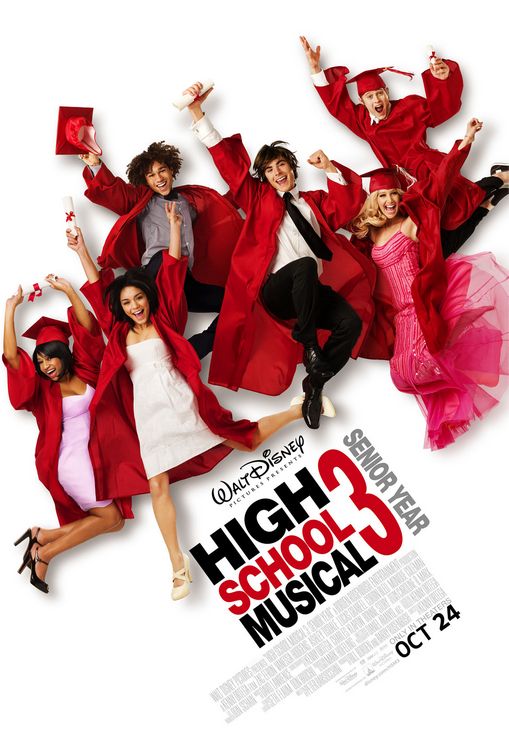 HIGH SCHOOL MUSICAL 3: SENIOR YEAR brings the TV phenomenon to the big screen. The movie continues the story of East High in Albuquerque. The jeopardy comes from two directions. Sharpay, the most snobbish, self-centered girl in the school, wants Troy, the basketball star, so badly that she will do anything to get him, including hurting her classmates. Troy’s girlfriend, Gabriella, is considering early admission to Stanford. If she succeeds, however, it will destroy the senior class play, a musical about the high school, and keep her from the prom. These opposing forces create conflict throughout the preparation of the big high school play.

HIGH SCHOOL MUSICAL 3 may be thin on plot, but so were many of the Hollywood musicals during the 1930s, 40s and 50s. At any given moment, the students break out into song and dance to express themselves. The numbers are fun, clean and full of dynamic energy. The good news is that, including a teenage kiss, there is nothing remotely salacious in HIGH SCHOOL MUSICAL 3. Finally, unlike most other Hollywood movies about young people, the heroes do the right thing instead of following their heart.

(BB, C, V, N, M) Strong moral worldview with brief mention of prayers and character sacrifice for others about high school students who love to play sports, sing and dance, but nothing salacious and the heroes do the right thing instead of following their heart; no foul language; mild pratfalls but not really violent; teenage romance with a kiss; upper male nudity in locker room; no alcohol; no smoking or drug references; and, one selfish character wants it all but gets her comeuppance.

HIGH SCHOOL MUSICAL 3 continues the story of East High in Albuquerque. The movie opens with the Wildcats losing in the first half of the championship basketball game. The obligatory halftime encouragement from team captain Troy and his father, Coach Jack Bolton, sends the team back with renewed vigor to win. Troy is the hero by letting the benched younger player make the winning shot and his beloved, Gabriella, jumps up to cheer for Troy.

Troy is a team player. He gave the last shot to a new kid. He is humble, considerate, concerned about others, as well as being handsome, cute and fun to watch. Gabriella is pretty, loving, open, and brilliant.

The jeopardy comes from two directions.

First, Gabriella’s single mom has always wanted her to go to Stanford. If she gets in as an early admission honors student, it will destroy the class play, which is a musical about the high school, and keep her from the prom. The jeopardy in Troy’s life comes from Sharpay, the most snobbish, self-centered girl in the school. Sharpay wants Troy so badly that she will do anything to get him, including hurting her classmates.

These opposing forces create conflict throughout the preparation of their big senior high school musical play. Added to that, Juilliard is sending two representatives to give one scholarship to one of several people: Troy, Sharpay, Sharpay’s brother Ryan, or Kelsi, who composes and plays the piano.

At a critical moment, Gabriella gets the news she has to leave for Stanford early. What will Troy do? Will Gabriella do the right thing or follow her heart? There are a lot of questions that must be resolved before the students can perform their high school musical play to a sellout crowd.

HIGH SCHOOL MUSICAL 3 is thin on plot. Award winning Kenny Ortega, who directed and choreographed the movie, loves the golden age of musicals. And, they were thin on plot too. At any given moment, the students break out into song and dance. The numbers are fun and clean, and full of dynamic energy, reminiscent of the golden age.

This is the third movie and the one where Troy very briefly expresses his love for Gabriella with a kiss. Aside from that, there is no sex, no sexual nudity, no violence except for some comic pratfalls, no drinking, no smoking, and no drugs, and the villain gets her comeuppance while the heroes do the right thing rather than following their heart. This is a delightful, fun movie that will get you dancing and singing. Younger audience members were walking out of the theater saying how great it was.

It should be noted HSM started as an idea in producer Bill Borden’s living room, “I wanted to make a musical that I could sit down and watch with my kids.” Thank you, Bill, for doing just that!