HUGH HEFNER: ONCE UPON A TIME 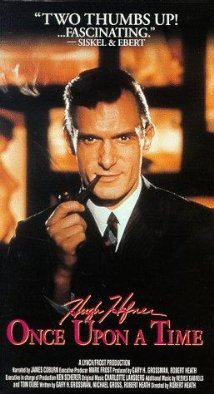 HUGH HEFNER: ONCE UPON A TIME, the authorized documentary on Hefner’s life, retraces the steps to the Playboy mansion–where bacchanalian orgies have given way to tinker toys. Hefner worked with the filmmakers, so this is Hef as he wants to be remembered. Reared in “a strict Methodist home with old-fashioned values and no hugging,” Hefner turned to fantasies, and movies became his refuge. When he lost his high school love and later when his fiancee had an affair, he changed himself and eventually gave birth to Playboy in 1953, as “a message of freedom in an age of restriction.” As a result, he would “like to be remembered as somebody who influenced his time in a positive way, who changed the social and sexual values of America.” There was a dark period when his assistant was murdered, an associate committed suicide, another playmate was murdered, and “conservatism moved across the land.” In 1985, Hef had a stroke, so after decades spent in reaction to his upbringing, Hugh came full circle, starting a second family and talking about traditional values. HUGH HEFNER: ONCE UPON A TIME reveals the spiritual emptiness in a life of hedonism. This is the tragedy of man. He is not adequate, and there is no one there to answer. Thus, the only sufficient relationship is with God Himself through Jesus Christ.