"A Sad Tragic Story that Didn’t Need to Be Told" 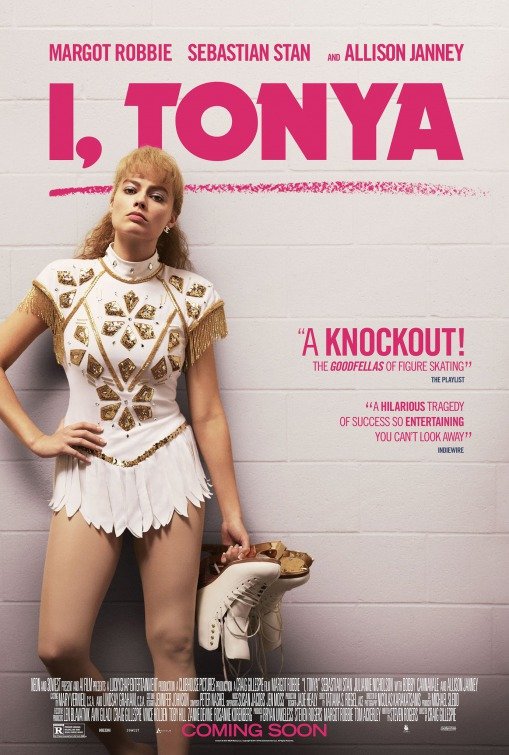 I, TONYA is about real life Olympic ice skater Tonya Harding’s tumultuous relationship with her mother and ex-husband, and the 1994 incident where Tonya’s husband attacked her competitor. Tonya was pushed by her abusive mother to be the best ice skater. She eventually found herself married to an abusive husband too. Tonya has difficulty winning competitions because of her rebellious, redneck attitude, but when she’s the first person to land a triple axel jump in a competition, she begins turning heads and finds her way to the Olympics. This leads to an incident where her husband hires some goons to break her competitor’s knee. The incident turns into an FBI investigation and makes Tonya a household name.

I, TONYA is naturally over the top in this crazy, sometimes unbelievable story. It will leave many viewers shaking their heads at the depravity and stupidity of certain human beings. There’s abundant foul language, disturbing domestic violence, and ultimately no redemption. It’s a heavy movie with not much to say, and not much to enjoy. So, Movieguide® advises audiences to steer clear of I, TONYA.

Dominant Worldview and Other Worldview Content/Elements:
Pagan worldview depicting all types of lawless, unruly behavior with no show of redemption or positive alternatives, with light moral elements showing how empty and hopeless such behavior is, and a subtle criticism of the media’s focus on tragic stories.
Foul Language:
At least 126 obscenities (most of which are “f” words), six profanities, and obscene gestures.
Violence:
strong violence, mostly of domestic abuse from a mother and a husband, a mother throws a knife at her daughter which sticks into her arm, husband throws wife against the wall, he grabs her hair, man tries to shoot wife, man beats wife many times, girl’s knee is broken, boxing violence.
Sex:
Strong sexual content includes two depicted sex scenes with no explicit nudity, but characters in underwear, a brother gropes his sister, and some kissing.
Nudity:
Upper male nudity, woman in her underwear.
Alcohol Use:
Moderate drinking with light drunkenness.
Smoking and/or Drug Use and Abuse:
Smoking.
Miscellaneous Immorality:
Terrible role models, dysfunctional family, and threatening.

I, TONYA is about real life Olympic Ice Skater Tonya Harding’s tumultuous relationship with her mother and ex-husband, and the 1994 incident where her competitor was attacked by Tonya’s husband. I, TONYA is a sometimes funny, mostly sad, somewhat compelling drama that ultimately doesn’t stick the landing.

The movie begins with the following words: “Based on the irony free, wildly contradictory, totally true interviews with Tonya Harding and Jeff Gilooly.” Tonya’s terribly mean, abusive, pushy mother LaVona had Tonya skating with a coach at the age of 4-years-old. Tonya was a natural who practiced all the time. When Tonya was a teenager, she met Jeff, a shy guy who always hung out with his chubby friend Shawn. Tonya and Jeff start dating, and it only takes a few months before Shawn becomes abusive toward Tonya. Since Tonya always got hit by her mother, she just assumed she deserved it, so she put up with it and eventually marries Jeff.

Tonya has trouble at competitions because she comes off as not very lady like and a rebel. Some would call her a redneck. However, when Tonya tries and lands a triple axel jump, something that had never been done before, she starts earning the admiration she wants and deserves.

At home, things with Jeff are almost always violent and messy. The two are continually breaking up and getting back together. At one point, when they’re back together, Jeff is trying to do everything he can to help Tonya get to the Olympics again. Because the competition, Nancy Kerrigan, is so tough, Jeff and his friend Shawn come up with the idea to send Nancy a death threat to throw her off her game during the competition. However, this escalates into Nancy actually getting her knee broken by one of Shawn’s goons. The FBI investigates everyone, throwing everything into chaos and creating a media frenzy.

I, TONYA is naturally over the top in this crazy, sometimes unbelievable story that will leave viewers shaking their heads at the depravity and stupidity of certain human beings. Tonya isn’t portrayed in a very likable manner, but she’s presented as a victim, including her mother’s abuse and control, her husband’s extremely violent behavior, and lastly as a victim of the media’s coverage of the sensational story that made her the talk of the nation. It’s truly a tragic story, but it’s also one that didn’t necessarily need to be told. Margot Robbie really transforms herself into Tonya and gives a great performance. The movie is too long, however, and becomes a chore to sit through.

Because of the abundant foul language, domestic violence and lack of redeeming qualities, I, TONYA really isn’t worth watching.