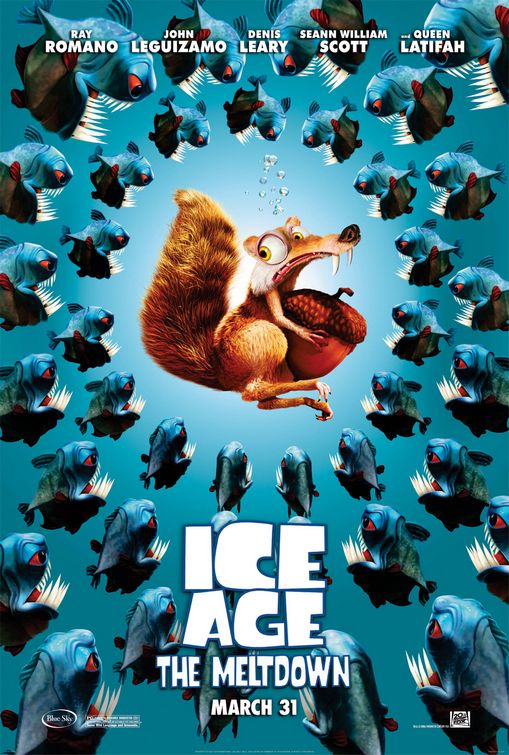 ICE AGE: THE MELTDOWN opens with a bigger role for Scrat, the squirrel-like animal who's still trying to get his acorn. While the other animals play in the water park formed by the melting glaciers, our heroes find out that behind the ice dam is a great sea of water waiting to break through and flood the valley. Everybody is urged to run as fast as they can to the other end of the valley and get in the ark. As they're traveling, Manny the mammoth, Diego the tiger and Sid the sloth have to face their fears. Diego fears water. Sid fears that nobody respects him, and Manny fears he's the last mammoth, until he meets Ellie, a female mammoth.

ICE AGE: THE MELTDOWN will melt your heart, tickle your funny bone, and delight your older children. The movie also has a lot of heart, including kindness, courage and self-sacrifice. That said, the movie has some really frightening, jump-out-of-your-seat moments, such as when Sid is thrown into a fiery volcano, or two dinosaurs attack Manny. There are also too many scatological jokes. Thus, this ICE AGE is not for younger children

(BB, C, L, VV, S, M) Strong moral worldview emphasizing finding a mate to carry on your family, self-sacrifice, loyalty, courage, overcoming your fears, with even a glimpse of Heaven; seven light obscenities such as the word "butt" and some crude jokes and other scatological humor; strong cartoon violence that is sometimes very scary involving many falls from great heights, many perilous situations, attacks by vicious animals, rocks hitting animals on head, being thrown into a fiery volcano, and animal kids use a sloth for a piñata; several sexual references, some of which are rebuked; no nudity; no alcohol; no smoking; and, a reference to juju magic.

ICE AGE: THE MELT DOWN is a very entertaining, edge of your seat, hilarious movie with a good message. That said, it has much more Loony Toon, scatological and pratfall humor than the animated movies from Pixar, Disney or DreamWorks. Coming out of the theater, an 8-year-old said it scared her a lot and she never wanted to see it again, but a 10-year old girl said she loved it a lot and wanted to see it again and again. These statements underline why MOVIEGUIDE® is concerned about the stages of child development. THE MELTDOWN skews toward older children and teenagers, and, of course, parents, who will appreciate the family message.

ICE AGE: THE MELTDOWN opens with a bigger role for Scrat, the squirrel-like animal who’s still trying to get his acorn. While the other animals are playing in the water park formed by the great shapes of the melting glaciers as spring advances, Scrat finds out that behind the ice dam is a great sea of water waiting to break through and flood the valley.

While the animal kids are using Sid the sloth as a living piñata, Fast Tony, voiced by Jay Leno, is trying to sell everything, including his grandmother, and warning everybody there’s going to be a great flood. Manny the mammoth and Diego the saber-toothed tiger do not believe it. Sid, to get some respect, climbs to the top of the ice dam to perform an impossible high dive. When Manny and Diego go up to find him, they too discover that the dam is holding back the great flood. Everybody is urged to run as fast as they can to the other end of the valley and get in the ark.

As they’re traveling, Manny, Diego and Sid have to face their fears. Diego has a great fear of water, Sid fears that nobody respects him, and Manny fears that he’s the last mammoth, until he comes across Ellie, voiced by Queen Latifah. Although Ellie is clearly a mammoth, she thinks she’s a possum because she’s been reared with two possum kids, Crash and Eddie.

Ellie has to find out who she is. Manny has to get over his shyness. Sid needs to find respect. Diego needs to conquer his fear. And, Scrat needs to get his acorn, which almost leads to divine intervention, although reviewers cannot reveal this providential spoiler. Needless to say, they all have to survive the flood. Things are complicated by two dinosaurs that thaw out of the ice and are intent on eating our friends.

ICE AGE: THE MELTDOWN brought laughter, tears and applause from the children in the audience, which is a big surprise to a reviewer. All the reviewers at the press junket were impressed by how the older children responded to the movie. That said, the movie has some really frightening, jump-out-of-your-seat moments, such as when Sid is thrown into a fiery volcano, or the two dinosaurs attack Manny. The pace and jeopardy are so good that, in spite of the fact that it’s a cartoon, the audience jumps with fear. Thus, this ICE AGE is not for younger children.

The audience will relate and did relate to the heartwarming love story between Ellie and Manny. The wonderful moral message of this movie is that boys are supposed to meet girls and form a family to propagate their own kind. If not, they will go extinct. This message should be communicated to the French, the Germans, the Swedes, and the other people who have forgotten what God-given sex and marriage are all about.

In the midst of some crude jokes, really, really big pratfalls and some scatological action violence, there’s a lot of heart in ICE AGE: THE MELTDOWN, including kindness, compassion and self-sacrifice. Even the two possums who are the ultimate pranksters show that they have heart in this movie. These are characters worth getting to know, although MOVIEGUIDE® would have hoped that some of the scatological elements had been toned down. ICE AGE will melt your heart, tickle your funny bone, and delight your older children.