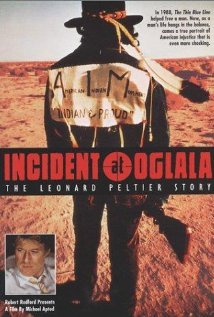 INCIDENT AT OGLALA is a well-made but definitely biased documentary which reviews the brutal murder of two FBI agents at the Pine Ridge Indian Reservation in 1975. It purports to show that one convicted suspect, Leonard Peltier, did not commit this crime. In doing so, however, it ignores pertinent information which would support other conclusions. To quote Solomon, "The first to present his case seems right, till another comes forward and questions him" (Proverbs 18:17).

INCIDENT AT OGLALA is a well-made but biased documentary which reviews the murder of two FBI agents at the Pine Ridge Indian Reservation in 1975. On June 26, 1975, FBI agents Jack Coler and Ron Williams pursued a robbery suspect onto the Reservation. Within minutes, a gunfight erupted between the agents and American Indian activists, and Coler and Williams were murdered. A massive manhunt ensued. One AIM member, Leonard Peltier, was eventually convicted of the murders and is now serving his sentence in Leavenworth Prison.

INCIDENT AT OGLALA, narrated by Robert Redford, will convince most that Peltier is innocent. However, the movie fails to point out that the suspects the FBI were chasing for armed robbery stopped their vehicle in an open field. From the surrounding hills more than 125 shots from high-powered rifles riddled the agents’ cars. This event could easily be interpreted as an ambush. Also, Peltier was wanted for attempted murder in Milwaukee, and why does he refuse to identify the true killer, whom he claims to know? In all, INCIDENT AT OGLALA must be viewed not only with an open mind, but with a rather large grain of salt.