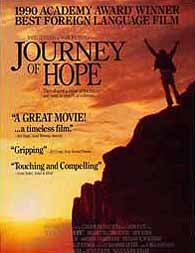 The 1991 Best Foreign Film Academy Award winner, JOURNEY OF HOPE, is a poignant story of one Kurdish man's struggle for a better life which leads only to defeat. Beautifully crafted, it unfortunately lacks hope because it includes no divine presence, only a complex, ironic human world with obstacles that few overcome.

(L, N) 2 profanities and a nude calendar on the wall.

The 1991 Best Foreign Film Academy Award winner, JOURNEY OF HOPE, is a poignant story of one Kurdish man’s struggle for a better life which leads only to defeat.

Haydar lives with his wife, Meryam, and their children on a small, rocky farm in Turkey. As Haydar’s best friend, Cemal, leaves illegally for Switzerland, he tries to convince Haydar that their only hope for the future is to escape their ancestral lands for the prosperous countries of western Europe. From the audience’s point of view, however, Haydar’s pastoral life in Turkey seems more favorable.

When Haydar receives a postcard from Cemal in Switzerland, he decides to sell all his possessions and emigrate with his wife to the new land of milk and honey. Haydar’s father tries to stop Haydar from selling his ancestral land; however, Haydar forges ahead on his journey of hope. On the black market, he pays an exorbitant amount to obtain two false passports. Later, Meryam refuses to go without one of their children, so they decide to take their youngest son, Mustafa.

When he gets to Istanbul, he is told that his passage is no good because he only has two tickets when he needs three. For another bribe, they are smuggled aboard a ship in a cargo container.

In Italy, he bribes a Swiss truck driver to take him north. The truck driver grows fond of Haydar and his family, but the border guards will not let Haydar enter Switzerland. They send him back to Milan where he meets a gang of smugglers who make it their business to smuggle Kurds into Switzerland.

The smugglers demand a high price, which Meryam sells her remaining jewelry to pay. Joined by several other refugees, they are driven up back roads to a wild mountain pass. Because the weather looks ominous, the Swiss guide refuses to take them over the pass. Thus, they are sent on their way without a guide over the towering snow-capped mountains. As they climb toward the pass, they see the guide being beaten by the smugglers. The grueling journey over the mountain strips them of everything they are carrying.

On the other side, a few are picked up by Swiss border guards. Others, including Meryam, find their way through the blizzard to a small Swiss town.

Haydar finally is picked up by an automobile. However, it is too late for little Mustafa, who has frozen to death.

Haydar ends up in jail for the death of his son. When the Swiss interrogator asks him why he made such a perilous journey, he responds, “Hope.” When asked what he is going to do with his son’s corpse, Haydar says he is taking him back to Kurdistan to bury him.

Timely in light of the plight of the Kurds in Iraq, JOURNEY OF HOPE is a well-crafted movie which gives us a profound insight into one man’s journey for a better life. Representing the full range of humanity, the true-to-life characters portray the depth of human emotion in all its complexity.

However, the movie fails to explore the most important relationship between God and man, and, in the final analysis, it lacks hope because it does not point to a sovereign Lord who could have delivered Haydar into a new life. Unlike NOT WITHOUT MY DAUGHTER, where God’s hand was visible throughout rescuing His people. JOURNEY OF HOPE portrays no divine presence, only a complex, ironic human world with obstacles that few overcome.