"The Notorious Story of the Kray Twins" 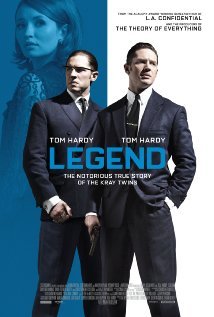 LEGEND tells the story of Reggie and Ronnie Kray, two of the most notorious gangster in England’s history, who tore a path across London in the 1960s. The movie focuses on Reggie Kray’s relationship with Frances Shea. When Reggie gets arrested, Frances asks him to stop being a gangster. Reggie agrees, but Ronnie, who loves being a gangster more than anything, does whatever he can to keep his brother in a life of crime. The movie follows the two brothers as they begin illegal casinos in London, sell drugs, murder, and expand their territory. Meanwhile, Frances does whatever she can to convince Reggie to leave his life of crime.

LEGEND is emblematic of classic gangster movies. There are no twists or political themes, simply a story of London’s two most notorious gangsters. With a strong performance by Tom Hardy as both brothers, the movie is packed with violence and crime that proves to be unsatisfying in the end. Reggie is successful, but loses everything he ever truly wanted. Extreme caution is advised for LEGEND due to extreme foul language and heavy violence.

(B, PaPa, Ho, LLL, VVV, S, N, AA, DD, MM) Light moral worldview about two evil gangsters running amok in 1960s London with lead female character wanting brothers to give up crime, and an underlying pagan worldview where gangsters live a life of crime and brutality, plus some implied homosexuality as one gangster says he prefers “boys” when the topic of getting girls is brought up, but the homosexual gangster is clearly mentally unstable; at least 114 obscenities and profanities (mostly “f” word); strong an graphic scenes of violence includes man punched in face, graphic scenes of torture, man run over by a car, car runs into building, fistfight in a bar, gangster bites off man’s ear, gangster beaten by prison guards, brothers fight in night club, man hit over the head with a glass, gangster beats his wife, man shot in leg, man killed by stabbing, slit throat, etc.; mild sexuality including implied homosexuality and implied orgy; upper male nudity; some drunkenness and alcohol use throughout; smoking cigarettes throughout, gangsters sell drugs and some drug use, including woman overdoses on prescription drugs; and, strong miscellaneous immorality includes greed, bad role models, gambling, some lying, blackmail of a doctor.

LEGEND tells the tale of the twin Kray brothers, two of the most notorious gangsters in London during the 1960s, with actor Tom Hardy playing both Reggie and Ronnie Kray.

Based on a book by John Pearson, THE PROFESSION OF VIOLENCE, the movie focuses mostly on Reggie Kray’s relationship with Frances Shea. Frances is the narrator, telling the story from her perspective.

The movie opens with Ronnie Kray in a mental hospital having been diagnosed mentally unstable. Reggie Kray blackmails his brother’s doctor in order to get him released. From the start, it’s clear that releasing his brother back into society may have been an unwise choice. The brothers front as club owners in the East End of London, but they make most of their money by selling drugs and providing protection for whoever will pay. Meanwhile, Scotland Yard is on their case with Detective “Nipper” Read personally invested in their case.

When Reggie Kray meets Frances Shea, he falls for her immediately. The two fall deeply in love, but Frances isn’t aware of everything Reggie does. When Reggie gets arrested, she asks him to stop being a gangster, afraid of living life visiting prison. Reggie promises Frances, but Ronnie, who loves being a gangster more than anything else, does whatever he can to keep his brother in a life of crime. The movie follows the two brothers as they begin illegal casinos in London and expand their territory in London, while Frances does whatever she can to convince Reggie to leave the life of crime.

Will Frances be able to convince Reggie to leave crime, or will Reggie choose loyalty to his brother over the love of his life? With Frances playing the angel on one shoulder, and Ronnie Kray playing the devil on the other, Reggie Kray has many decisions to make.

LEGEND is very emblematic of classic gangster movies. There are no twists or political themes to LEGEND; it’s simply a story of London’s most notorious gangsters. The movie is packed with violence and crime that proves to be unsatisfying in the end. Although Reggie is successful as a gangster, in the end he loses everything he ever truly wanted.

Tom Hardy does an incredible job playing both of the Kray brothers. Each character is unique and has distinct mannerisms. While watching the movie, it’s hard to tell they’re being played by the same man. Hardy brings uniqueness and quirk to the characters of the Kray brothers. LEGEND is unlike modern gangster movies in that it’s lighter and more humorous than many of its rivals.

Even so, very extreme caution is advised for LEGEND due to abundant foul language and heavy violence.