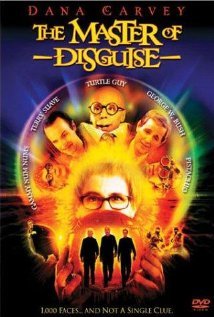 Funnyman Dana Carvey stars in MASTER OF DISGUISE as an Italian waiter who fights off a criminal mastermind with his inherited, magical powers of disguise. As Pistachio, Carvey’s character must learn the truth about his magical disguising abilities when his parents are kidnapped and his grandfather comes to train him. After rigorous training with a “slapping dummy,” Pistachio is ready to repeat his mantra, “Become another person.” Using a number of different disguises, and hiring a pretty assistant, Disguisey learns that the evil Devlin Bowman is using his father to steal great national treasures (such as the U.S. Constitution and the Apollo Lunar Landing Module) for his own greedy collection. Pistachio follows various clues to Bowman’s lair, but he may be too late.

MASTER OF DISGUISE is mildly humorous, mostly boring, but mercifully short at 80 minutes. The pagan occult elements aren’t scary, but they are pervasive. There are some sexual innuendoes, most of which will go over the children’s heads, but will certainly offend some audiences. MASTER OF DISGUISE also contains some inappropriate body humor. The laughs in the screening audience died out pretty quickly when the sketches dragged on infinitum

(PaPa, OO, Ro, B, L, VV, S, A, M) Pagan occult worldview with magical energy gifting that allows one person to become another by repeating a mantra with some secondary Romantic elements with emotions ruling decisions as well as one biblical element with protagonist praying to God and asking forgiveness for mocking Him; mild language with only one mild obscenity plus some body humor, especially flatulence; consistent comedic violence mostly with slapping; various sexual innuendos, numerous comments about the rear ends of females; no nudity; and, lying and deception.

Because a movie is so charming, witty, well written, well produced, truthful and intriguing, it is natural to overlook or downplay its faults and give it a high grade. MASTER OF DISGUISE is not such a movie.

The credits begin in a spooky, Harry Potter style with candles, ancient books with mysterious symbols, pictures of sorcerers and mermaids, and an “Illuminati-type” eyeball symbol. The movie immediately turns silly from there and tells viewers that an Italian waiter named Pistachio Disguisey, played by Dana Carvey of TV’s SATURDAY NIGHT LIVE and the WAYNE’S WORLD movies, hails from a long line of magical disguise artists. His father (James Brolin), who once disguised himself as Bo Derek, has kept this secret from him in hopes that he’d lead a more normal life, but Pistachio has often wondered why he’s had strange urges to disguise himself and imitate others.

Pistachio must learn the truth, however, when his parents are kidnapped from their restaurant and his grandfather appears to train him in the magical art of disguise. His grandfather assures him that the gift is always to be used to protect the world from evil, and he proceeds to teach him how to tap into “energico,” the invisible energy field that enables him to think, act and feel like another person. After rigorous training with a “slapping dummy,” Pistachio is ready to repeat his mantra, “Become another person.”

Using a number of different disguises and hiring a gorgeous, but “tush-challenged” gal friday, Jennifer (Jennifer Esposito), Disguisey learns that the evil Devlin Bowman (Brent Spiner, a.k.a. “Data” from STAR TREK) is using his father to steal great national treasures (such as the U.S. Constitution and the Apollo Lunar Landing Module) for his own greedy collection. Pistachio and Jennifer follow various clues to Bowman’s lair, but they may be too late.

MASTER OF DISGUISE is mildly humorous, mostly boring, but mercifully short at 80 minutes. The occult elements aren’t scary, but they are pervasive. There are some sexual innuendos, most of which will go over the children’s heads, but will certainly offend some audiences. The protagonist likes women with large derrieres (like his Mama’s), and that theme is really played up, including a dance of large derriere endowed women at the end. Pistachio asks a servant holding a tray, “Do you have a teeny wiener and tiny nuts? Because it looks like you might.” When he’s dressed as a woman, Pistachio puts his leg around a man and makes slightly veiled sexual advances.

There is also much body humor in MASTER OF DISGUISE, which evoked the biggest laughs from the children in the audience, and there is one mild curse word. The slapping violence is constant, and a jealous boyfriend hurts and threatens Pistachio and is mean to a child.

To make matters worse, MASTER OF DISGUISE lacks good comedic timing. Carvey hogs the camera, and, though he is enjoyable for short, “Saturday Night Live” moments (like imitating the president), the humor does not stretch well into a good feature. The laughs in the audience died out pretty quickly when the sketches dragged on infinitum.

There were no real universal truths to glean from this movie; only mindless, vaguely entertaining acts. The credits were good, though, and the popcorn was better.