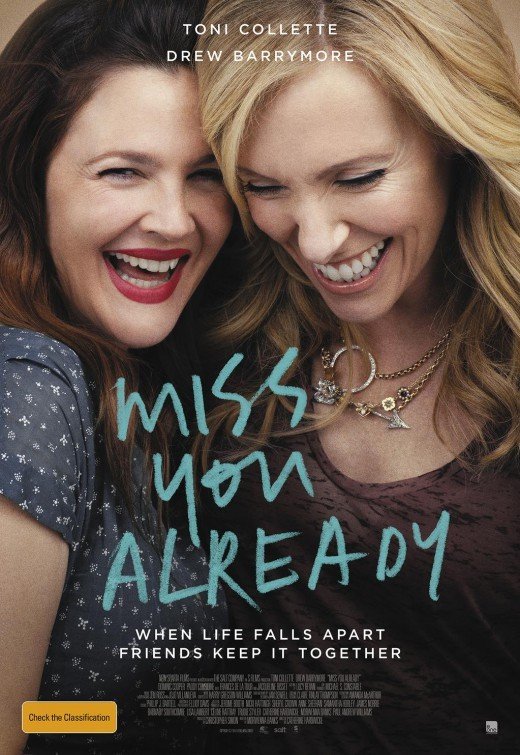 MISS YOU ALREADY is about the long-time friendship between two women in their late thirties. Milly and Jess were childhood friends. Milly married a rocker turned businessman and has a family, and Jess and her boyfriend want to have a baby. Milly is a dramatic, fashionable woman who likes notoriety. Jess is a down to earth, low key, sweet woman who wants to help people. Despite their differences, they love each other. When Milly finds out she has breast cancer, her selfish actions put her friendship with Jess to the test.

MISS YOU ALREADY has a light mixed pagan worldview, with some very positive statements about family and new life. When the main character Milly gets cancer, her selfish ways are exposed, and the movie shows the repercussions. Milly’s friend, Jess, however, is positive, supportive, selfless, and loving. MISS YOU ALREADY is very well acted and entertaining, but the plot could be tightened up a bit. The story is also sometimes too depressing. Finally, MISS YOU ALREADY has plenty of foul language and some lewd content, so extreme caution is advised.

(Pa, B, C, Ho, LL, V, SS, B, A, MM) Light, somewhat mixed pagan worldview includes one slightly New Age character who doesn’t say specifically what she believes, another character has an affair and is selfish, mixed with some positive moral, redemptive elements includes one character is very selfless, loving and caring, there’s a very positive portrayal of family, children and pregnancy, and there are some general references to Heaven, plus some homosexual references regarding a homosexual couple; 23 obscenities (including one “f” word), 11 profanities, five strong profanities, vomiting, vulgar comments, middle finger; no violence besides blood being taken for chemotherapy, and woman shows her chest that’s completely scared from the double mastectomy; married woman has an affair, sex inside marriage, couple lives together and is having a baby, man goes to give sperm to help have baby, but nothing shown just mentioned humorously, and a homosexual couple; upper male nudity, female shows breast to someone but not shown to audience, scarred breast shown after double mastectomy, so just having scarring, and woman in bra; drinking and drunkenness; no smoking or illegal drug use; and, lying, vanity, selfishness.

MISS YOU ALREADY is about two long-time female friends, whose friendship is put to the test when one of them gets very sick. MISS YOU ALREADY is entertaining and very well acted, but the plot needs work, and there’s plenty of foul language, some lewd content and serious adult issues, with moral and immoral elements.

Jess and Milly met when they were just children. From the moment Jess came into Milly’s class, the two formed a connection. They did everything together.

Flash forward to their late thirties. Milly is married to a rocker, now businessman, with a family, and Jess and her live-in boyfriend want to have a baby. Milly is a dramatic, fashionable woman who likes to be noticed, and Jess is a down to earth, low key, sweet woman who wants to help people. Even though there are differences, the two love each other.

When Milly finds out she has breast cancer, she has a major breakdown. Jess tries to comfort her and takes her to the chemo infusions. Milly has to have a double mastectomy and is completely saddened because she feels she’s loosing her womanhood. At the same time, Jess finally finds out that she’s pregnant, after trying so hard. Jess decides not to tell Milly, however, because she thinks Milly already has too much on her plate.

Milly’s husband Kit decides to have a surprise party for Milly’s birthday. Feeling like everyone is just there because they pity her, she yells at everyone and storms away. Jess runs after her, and the two get in a taxi and head to where their favorite book, WUTHERING HEIGHTS takes place, the Yorkshire Moors. The two had never been there before, and even though Jess thought it was totally crazy, they have fun and finally arrive at a Wuthering Height’s themed bed and breakfast. What Jess doesn’t know is that Milly had an affair with a bartender, who now works at the bed and breakfast.

When Jess finds out what Milly has done, the two get into a fight. Will the friendship last in the midst of all these struggles?

MISS YOU ALREADY has a pagan worldview, but that’s mixed with some very positive statements about family and new life. When the main character, Milly, gets breast cancer, her selfish ways are exposed, and the movie does show the repercussions. Jess, however, is always positive, supportive, selfless, and loving. Then, when Milly has an affair, Jess talks about the negative side effects of that. That said, Jess is living with her boyfriend, and the two aren’t getting married. Also, Jess talks about Heaven and angels, but in a general way that sometimes seems slightly New Age. Finally, MISS YOU ALREADY has an extremely positive portrayal of family and the new life of a baby.

MISS YOU ALREADY is very well acted. The story is entertaining, but the plot could have been tightened up a bit. Even though the main characters use ironic humor to make light of a tragic health issue, the movie’s depiction of the struggle against cancer is a little depressing. Audiences who’ve been through this situation don’t necessarily want to remember the pain of it, and audiences, who haven’t don’t, as well. Finally, MISS YOU ALREADY has plenty of foul language, some sexual content, and references to a homosexual couple. So, extreme caution is advised.