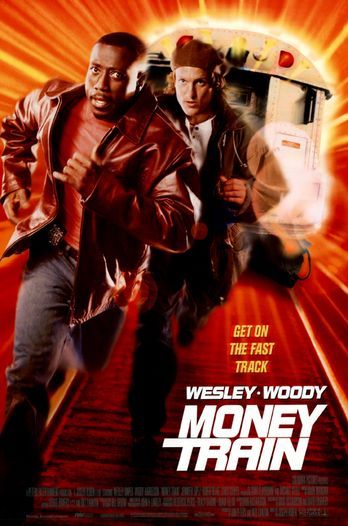 Wesley Snipes and Woody Harrelson showcase their 'buddy' chemistry in MONEY TRAIN, as foster-brother transit cops who plot to steal the New York City subway money train that obsesses their evil Transit Authority boss. Constant violence, including multiple fights, and the plot about policemen becoming thieves overshadows any positive theme of brotherly love and loyalty in this rambling film.

Wesley Snipes and Woody Harrelson buddy up in MONEY TRAIN. They are foster brothers working as undercover policemen for the New York City subway system. After an early confrontation with their evil Transit Authority boss named Patterson, they become vengeful and plot to steal his all important money train. Meanwhile, they vie for the affections of the beautiful transit policewoman, Grace, newly assigned to their unit. Harrelson eventually finds himself with no money, no job and no girl, so plans to steal the train on his own. From there the brothers alternately fight and work together to try to save both their own lives and the lives of the passenger train traveling the same tunnel as the money train.

Both Wesley Snipes and Woody Harrelson showcase their easy, dynamic chemistry in MONEY TRAIN, but even their interaction can’t save the film from itself. Uneven, the story is filled with weakly justified subplots and constant gratuitous violence. There are no true heroes here, as policemen fight policemen and brothers fight brothers. Even the plot attempts to justify a pair of policemen who become thieves. These elements along with profuse obscenities overshadow any positive theme of brotherly love and loyalty in this rambling film