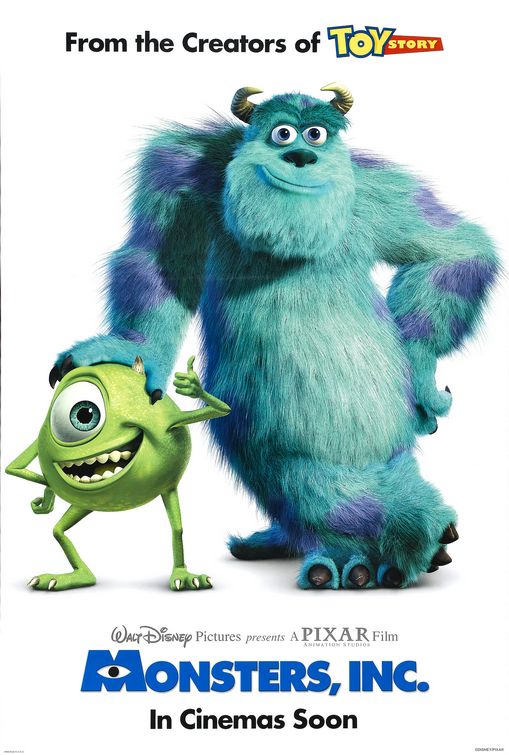 MONSTERS, INC. takes place in Monstropolis, a thriving company town where monsters of all shapes and sizes reside. John Goodman plays James P. Sullivan (“Just call me Sulley,” he says), the top kid scarer for Monsters, Inc. Sulley’s job is to jump out of closets to scare kids so that Monsters, Inc. can collect the power of children’s screams. The company converts that power into electricity. When a little girl accidentally follows Sulley back into his world, Sulley and his friend Mike, played by Billy Crystal, scheme to put the little girl, whom Sulley nicknames Boo, back into her bedroom. They don’t realize that the evil, chameleon-like Randall has other, insidious plans for the cute little human child.

Pixar Animation Studios has done it again! Pixar has fashioned a hilarious, incredibly imaginative, exciting, fabulous, family-friendly animated movie. MONSTERS, INC. not only shows that fun and friendship conquer fear, it also shows that love conquers them too. This movie has lots of heart for the whole family. MOVIEGUIDE® suggests a very mild caution, however, for the youngest children, specifically ages 2 through 5, due to some potentially frightening moments, although these moments are much milder than most movies.

Pixar does it again! The only movie company that has produced a string of hits that are all family oriented, including TOY STORY I and II and A BUG’S LIFE, now brings us another movie where fun triumphs over fear. To those who love God’s word, we are called not to be afraid and that is exactly the message of MONSTERS, INC. It delivers this message with great joy, good characters and a fun script. The bad guys get their comeuppance, and the good guys learn how to be better.

Distributed by Walt Disney Pictures, MONSTERS, INC. takes place in Monstropolis, a thriving company town where monsters of all shapes and sizes reside. John Goodman plays James P. Sullivan (“Just call me Sulley,” he says), the top child scarer for Monsters, Inc. Working with his enthusiastic Scare Assistant, roommate and friend, Mike (played by Billy Crystal), Sulley’s job is to jump out of closets to scare children so that Monsters, Inc. can collect the power of children’s screams. The company converts that power into electrical energy, which the townsmonsters of Monstropolis use to power their homes, businesses and vehicles. Complicating matters is the fact that the monsters are themselves scared of children because they think that human children are toxic.

When a little girl accidentally follows Sulley back into his world, he finds his career in jeopardy and his life in chaos. Assisted by Mike, he schemes to put the little girl, whom he nicknames Boo, back into her bedroom. He doesn’t realize that the evil, chameleon-like Randall has other, insidious plans for the cute little human child.

There are two areas in MONSTERS, INC., which bring some concern.

Those who are engaged in cognitive development theory will say that, although it is a very friendly film, they don’t want little children in the imagination stage (from about age 3 to 6) to develop the fear that things go bump in the night might actually exist. With a little parental involvement, however, children in the imagination stage can be guided through the scary parts of the imaginary scenario in MONSTERS, INC.

Also, some theologians will be concerned that MONSTERS, INC. makes sub-natural creatures such as demons too friendly. In reality, however, the movie avoids this issue and handles its story concept in a redemptive, honest fashion. Furthermore, the movie will bring tears to many eyes when Sulley realizes what terrible things fear can actually do and how awful the face of fear truly looks. Again, parents are the critical factor in helping their children understand this issue. They are the best ones to lovingly explain truth and reality to their children.

As always, therefore, MOVIEGUIDE® errs on the side of caution and advises parents to exercise such caution with their youngest children in this case. Thus, MONSTERS, INC. may not be appropriate for every child age 2-5. Children of that age may not be ready to fully understand, or fully enjoy, the movie at that stage, anyway. With their parents’ help, however, slightly older children will be better able to process the information in MONSTERS, INC. Also, they will be well rewarded for their increased understanding and discernment, because MONSTERS, INC. is one of the most eye-popping, imaginative, heart-pounding, and heart-warming fairy tales ever produced. Moreover, children of all other ages from 6 to way beyond sixty and especially teenagers will love this heart-warming, imaginative tale. In fact, it gave us tears of laughter!

John Goodman does a tremendous job as Sulley, the scary monster with a heart of gold. Billy Crystal is superb as Sulley’s faithful friend, Mike. They make a wonderful team. Little Mary Gibbs as the little girl, Boo, also does a great job. She, in fact, provides the heart of this masterpiece with her tiny, lovable voice. Her voice will melt your heart just as it did Sulley’s. Last, but certainly not least, John Ratzenberger (who has been in every Pixar feature) has a fabulous cameo as the lonely abominable snowman.

It’s the heart that comes out in this story that is truly most amazing. Pixar’s team of writers, animators and actors, led by Pete Docter, Andrew Stanton, Darla Anderson, and John Lasseter, have proven, once again, that it’s story and characters that matter most. Their message is full of love, laughter, fun, and friendship, flavored with a dash of bravery and courage. This is a great message to share in this upcoming holiday season. In fact, it’s a great message for any season.

As one of the characters says in MONSTERS, INC., “Laughter is 10 times more powerful than fear.” More importantly, however, MONSTERS, INC. also shows that, “Love is infinitely more powerful than anything else.” After all, it’s Sulley’s love for Boo and Mike’s love for his friend that ultimately save the day and defeat the villainous plans of Randall. This is also true in our own lives, here on the far side of Fantasyland.

Of course, the greatest love of all is the love that the Savior of the Human Race, Jesus Christ, showed for all of us sinners by dying on the Cross for our sins. This is the Good News of Jesus Christ and His Story, the Greatest Story Ever Told. Furthermore, if Love is infinitely more powerful than anything else, then Love must have an infinite Source, or Creator. Surely, this is one way that each person can know that God does indeed exist. And by so knowing, he will then join the host of believers who are “more than conquerors” because nothing – not even death, angels, demons, monsters, or fear – can separate them “from the love of God that is in Christ Jesus our Lord (Rom. 8:39).”

In the final analysis, MONSTERS, INC is one of the most fun and uplifting films in years. It is a delightful, powerful story which teaches a basic principal . . . fear not.