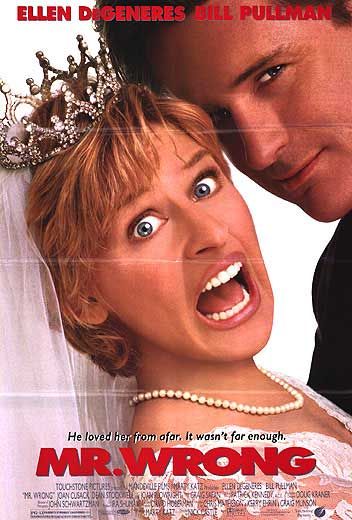 In MR. WRONG, TV sitcom star Ellen DeGeneres plays Martha Alson, a woman looking for Mr. Right. She finds MR. WRONG, in the form of Bill Pullman, who chases her throughout the film with a set of ridiculous tricks to "win" her back. Implying fornication and sometimes, mean spirited, it is a comedy that has an unbelievable premise.

In MR. WRONG, TV sitcom star Ellen DeGeneres plays Martha Alson, a woman looking for Mr. Right. Martha doesn’t know what she is getting into when she tells her newfound Mr. Right, Whitman, played by Bill Pullman, to “be himself.” A poet, an investor, a romantic, he fits the bill for both Martha and her “when are you getting married, dear?” family. However, when he finally lets down his front, Mr. Right immediately reveals himself to be a just-for-fun-shoplifter and man of generally poor taste. Martha winds up trying her best to ditch the obsessive loser as he chases her throughout the film with a set of ridiculous tricks to “win” her back.

In general, even though DeGeneres’ sitcom-style acting translates a bit awkwardly onto the big screen, the plot has enough twists and the story enough redeeming value to keep viewers interested throughout. Identifying with Martha is a bit difficult, if only because Whitman wasn’t a very convincing Mr. Right in the first place. (Bill Pullman is a more convincing Mr. Right in WHILE YOU WERE SLEEPING.) Yet, in this movie, if we had seen what she saw in him in the first place, maybe we’d be more sympathetic when he “turns,” but at most we’re left hoping that next time, she’ll think twice before sleeping with someone on the first date.